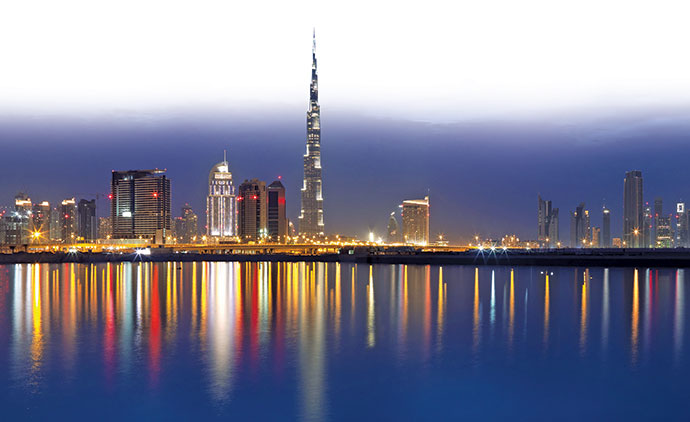 o the south is a nation where a woman is arrested if she drives an automobile. To the north, across a narrow strait, is a nation which mixes religious politics with nuclear politics. In between is a tiny confederacy of 2 million people which has become an even-handed bastion of capitalism and opportunity, the United Arab Emirates. Despite the iffy neighborhood, it works.

The United Arab Emirates (UAE), a union of seven peaceable royal sovereignties, is back in the mega-development game after being briefly benched by a corporate debt crisis and near collapse of its property market, most significantly in Dubai.

Five years after the 2008 global recession rattled the Emirates, a re-emergent Dubai won its bid to host the 2020 World Expo, held every five years in a place deemed worthy of the world’s attention. The Expo has been hailed as a catalyst for “economic, cultural and social transformation” and “a key meeting point for the global community to share innovations and make progress on issues of international importance such as the global economy, sustainable development and improved quality of life for the world’s population.” Lofty goals, to be sure, but nobody does lofty better than Dubai.

Sheikh Muhammad bin Rashid Al Maktoum, ruler of the Emirate of Dubai, declares that, “In the UAE, we have no such word as ‘impossible.’ It does not exist in our lexicon. Such a word is used by the lazy and the weak, who fear challenges and progress.” Considering that barely 20 years ago Sheikh Zayed Road, Dubai’s bustling and modern main thoroughfare, was mostly sand, it would be foolish not to buy into the sheik’s stalwart credo.

Dubai’s successful bid for the 2020 World Expo will fast-track a number of infrastructure projects, including the expansion of Dubai Metro. The emirate will spend $7 billion on the new infrastructure needs for the 2020 Expo. It expects to create more than 277,000 jobs between now and 2021, when the six-month exhibition concludes.

Relative to the world at large and the EU in particular, Dubai and the wider UAE recovered quickly from the economic downturn. Even during the worst of the recession, the UAE maintained spending on big infrastructure projects, helping attract $9.6 billion in foreign direct investment (FDI) in 2012, a whopping 25-percent increase over 2011. That was enough to make the UAE West Asia’s third-largest recipient of FDI and fastest growing economy in the region. In 2014, that figure is expected to increase to $14.4 billion.

The International Monetary Fund is so bullish on the UAE right now that it recently upgraded its GDP forecast for the country from 3.9 percent to 4.5 percent for 2014.

In a recent interview with Euronews, Abdulla Al Saleh, Trade Undersecretary at the Economy Ministry, proudly proclaimed: “The UAE is one of the major attractive markets for FDI. The UAE is considered to be one of the 10 top countries that will attract investments in 2014 and 2015, according to UNCTAD [United Nations Conference on Trade and Development] estimates.”

According to recent reports, more than 500 new projects were launched in Dubai during 2013, the highest number for five years.

Still, it’s a high-priced market where even relatively small-scale disputes can lead to high-end problems. For example, a dust-up over a $25,000 service charge tacked onto all apartments in Dubai’s iconic Burj Khalifa, the world’s tallest building and easily one of its most luxurious, led to the shutdown of elevators and air-conditioning for some residents over Valentine’s Day weekend. One would suspect that taking the stairs in the 108-story building is a tad unpleasant.

In the four months since the Expo announcement the Emirate has announced a host of ambitious new projects, including construction of a double-decker highway on the Sheikh Zayed Road and a nearly seven-mile boardwalk ringing the Palm Jumeirah. There’s even talk the uber-ambitious World Islands project is being resuscitated.

In 1986, The Economist introduced the Big Mac Index, a somewhat tongue-in-cheek measurement of a nation’s purchasing power parity. The McIndex purports to chart the relative value of different currencies and the extent to which market exchange rates result in comparable goods costing different amounts in different countries. Supposedly, this produces an indicator of the overall health of an economy, if not a diet.

Whether the theory holds true or not for the UAE’s relatively pricey Big Macs, McDonald’s plans to sell a bunch of them. The burger giant recently announced plans to grow its presence across the Emirates with the addition of 15 new restaurants in 2014. The new openings will reflect a 19-percent increase in the company’s workforce. When added to the 119 outlets McDonald’s already has in the UAE, the world’s most recognizable fast-food chain is setting itself up to keep the estimated 75 million World Expo visitors fat and happy on burgers and Coke.

McDonalds is but one of hundreds of Western corporations with supersized dreams for this desert Oasis. Jollibee Foods Corp., another fast-food chain, is also planning to expand into the UAE in a big way in the coming year.

Foreign investors have noticed, and returned in droves. Business is booming at ports and free trade zones in Dubai, Abu Dhabi and Ras Al Khaimah, and the surging FDI trends seem likely to continue.