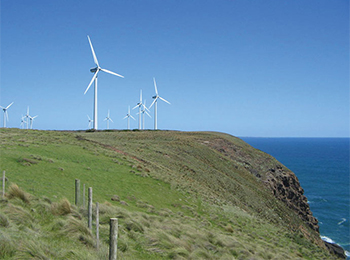 An industry finds the best routes for growth by land and by sea.

n January, using new employment data from 123 countries and the European Union, the International Renewable Energy Agency (IRENA) said that in 2012, employment in renewable energy worldwide stood at 5.7 million with the potential for adding 11 million jobs in the years to 2030, with 2.1 million of the new jobs coming from the wind sector.

“Europe has long been the wind industry leader,” said the IRENA report. But the industry is expanding increasingly into other parts of the world. In 2012, China and the United States led in total capacity added, ahead of Germany and India.

IRENA notes that China’s turbine manufacturers may repeat what they’ve done in Latin America and push into other international markets. “Japan, Australia and Brazil are also becoming more prominent players.” A number of local governments in Japan in particular have committed to more renewable energy in their generation mix since that country’s tsunami and subsequent nuclear power plant disaster in March 2011.

“Even in countries that are not global leaders, such as Mexico, wind energy is increasingly taking off and generating employment,” says IRENA. “In that country, total installed wind capacity shot from 84 MW in 2006 to 1.2 gigawatts (GW) in 2012, with another 2 GW under construction, according to Mexico’s energy secretariat (SENER), which projects nationwide capacity could reach 12 GW of wind power as soon as 2020.” 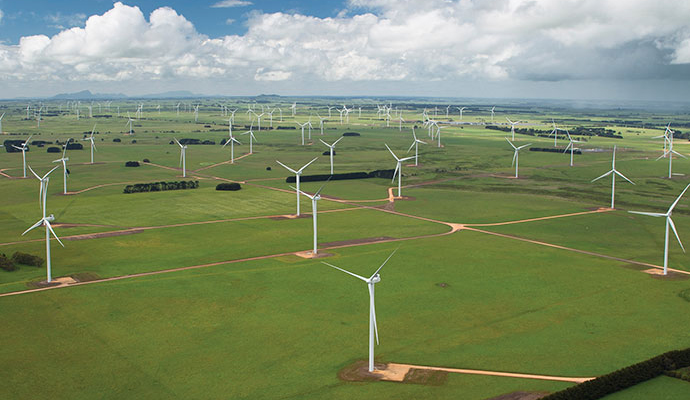 A mammoth 7.5-MW wind turbine stands over the ENERCON manufacturing facility at the Port of Magdeburg in Saxony-Anhalt, Germany. The company employs several thousand people in the manufacture of wind power equipment in Saxony-Anhalt, including a projected 600 at the new plant it opened in June 2013 in Haren/Emsland.
Photo by Adam Bruns

GE, at 15.5 percent, has the highest market share for turbine suppliers globally, says IRENA, followed by Vestas (Denmark), Siemens (Germany), ENERCON (Germany), Suzlon (India) and Gamesa (Spain). The remaining four of the top 10 suppliers were based in China, which also leads the world in the manufacture of “small wind” turbines destined for non-utility-scale sites.

Investment in onshore EU wind farms came to between US$11 billion and $16.5 billion, with offshore accounting for between $6.3 billion and $8.8 billion. Seven percent of leader Germany’s 3,237 new MW were offshore. Second-place UK’s 1,883 MW included 39 percent offshore. Offshore accounted for almost 14 percent of total EU wind power installations in 2013, and saw record growth of 1.6 GW. The EWEA says market and regulatory stability is “critical to bringing forward the 22,000 MW of consented projects across Europe.” 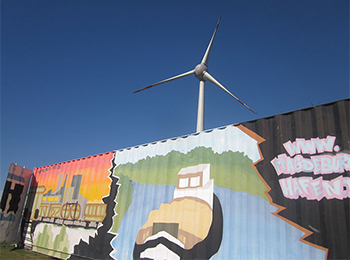 Nearly 85 percent of wind jobs are in onshore projects, said the recent IRENA report. But offshore employment more than doubled in 2012 alone, to reach 18,000 jobs.

Some of those jobs could be coming to the US Northeast, where last July, with a bid of $3.8 million, Deepwater wind was the provisional winner of two offshore sites in federal waters off the coasts of Rhode Island and Massachusetts.

Its Deepwater Wind Energy Center will be a utility-scale wind farm of up to 200 turbines with a regional transmission system linking Long Island, N.Y., to southeastern New England. It will have a capacity of up to 1,000 MW. Construction could begin as early as 2017, with commercial operations by 2018.

Warren Buffett’s MidAmerican Energy on Dec. 16 placed the largest single order for onshore wind power ever awarded globally, for 448 wind turbines with capacity of 1,050 megawatts, with Siemens. The order has been estimated to be worth approximately $1 billion.

Among the American Wind Energy Association’s highlights from its fourth quarter 2013 market report:

The Global Wind Energy Council (GWEC) in February released its 2013 market statistics, showing global wind energy capacity has tripled over the past five years to reach a total of 318,137 MW. Canada recorded exceptionally strong growth in 2013 with a record of close to 1,600 MW of new wind energy capacity installed.

“Many provincial governments are on the threshold of meeting their initial commitments to wind energy development,” said Robert Hornung, president of the Canadian Wind Energy Association. Notably, he said, Ontario and Quebec made commitments in 2013 to secure a combined 1,400 MW of new wind energy capacity.

GWEC expects the global growth rate for 2014 installations to rise significantly as major new Canadian and US wind energy comes on stream, and as emerging markets in Africa, Asia, and Latin America continue to build momentum.