The Tramagal plant is the central production location of the FUSO Canter in Europe.
T

he FUSO Canter Truck plant in Tramagal, Portugal, celebrated its 50th anniversary in early February. The original plant was started as a joint venture in 1964 by the Portuguese Duarte Ferreira firm and French manufacturer Berliet. Though the original collaboration with Mitsubishi occurred in 1980, the company wasn’t acquired by Mitsubishi until 1996. In 2004, Daimler bought the controlling shares of the company. The plant has over 300 employees and has produced more than 200,000 vehicles in its 50-year history. Over the past four years, Daimler Trucks has invested approximately US$37 million (€27 million) to transform and modernize production operations and further develop the FUSO Canter, the best-selling truck in the company’s truck portfolio. Nearly 95 percent of the vehicles are exported, primarily to Germany, the UK and France.

Where The Grass is Greener Bikers in the Moselle region of Luxembourg
A

The EPI uses 20 indicators from nine different categories — from health impacts to water and sanitation to forests and fisheries — to determine how well countries protect people from environmental harm and how well they protect ecosystems from human impact. ovelis, the Georgia-based manufacturer of rolled aluminum products, is building a new scrap aluminum collection and processing site in Campinas, Brazil. The site will be able to process up to 500 tons of aluminum per month. Rolled aluminum produced by Novelis is used in everything from beverage cans to automobiles. This is the company’s seventh such facility in the country.

“We chose Campinas due to the region’s economic potential, as well as for its population, climate, location and its synergy with our recycling centers at Sertaozinho, São Paulo and Pindamonhangaba,” said Eduardo Lima, recycling business manager for Novelis. BM is making a $100-million investment in a 10-year initiative dubbed “Project Lucy.” The initiative will bring Watson, a cloud-based cognitive computing system, and other such systems to the IBM Research–Africa lab at the Catholic University of Eastern Africa in Nairobi, Kenya. The company will partner with universities, development agencies, start-ups and clients in Africa and around the world to build an ecosystem to drive economic development on the continent. According to the IMF, Africa is expected to be the world’s second fastest growing region with projected growth of over 5 percent this year. 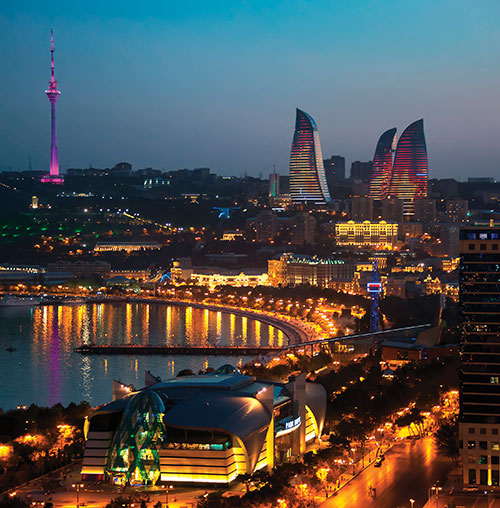 IBM further expanded operations in Africa with the opening of two IBM Innovation Centers in Casablanca, Morocco, and Lagos, Nigeria. The goal of the two facilities is to create a climate of development and entrepreneurship around Big Data, analytics and cloud computing technologies to address regional challenges such as improving government services, digitizing banking services and augmenting customer service

The Flame Towers in Baku, capital city of Azerbaijan, are located on a hill overlooking the Baku Bay and old city center, a UNESCO World Heritage Site. Each 600-ft. tower has a different function. One is a 39-story residential tower; another is a 36-floor hotel operated by Fairmont Hotels; the third is an office tower with more than 33,000 sq. m. (355,220 sq. ft.) of Class A commercial office space. At night the towers are lit up with 10,000 LED lights.
Photography Farid Khayrulin/DIA Holdings, Design HOK