Add this new metric to your economic development dashboard, and see what happens next. 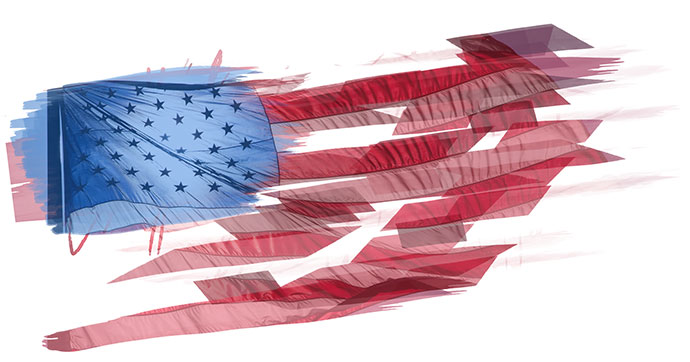 conomic development in the United States has historically meant job attraction, retention and expansion as the way to ensure sustainable prosperity for residents of a community. Unfortunately, this approach falls well short of the profession’s real purpose — to enable residents to achieve their American Dream.

The dream of a freer and more fulfilled life is what all residents seek, and is embedded in the core promise of our nation. It is the reason people immigrate to America and the reason residents get out of bed each morning to tackle the myriad challenges they face on any given day.

But isn’t having a well-paying job actually synonymous with the American Dream? The short answer is emphatically “No!” Researchers at Xavier University in Cincinnati, Ohio, have quantified the concept of the American Dream. After three years of research and testing, they established the American Dream Composite Index™ (ADCI) powered by dunnhumby. The ADCI is a statistically validated survey that gauges resident sentiment regarding the extent to which they are achieving the American Dream. The monthly survey comprises 139 statistically derived statements, and is sent to a demographically representative group of at least 1,000 respondents.

The research indicates the ADCI consists of 35 unique “dreams within a dream” (aka dimensions). Each are measured and reported separately. These range from such traditional aspirations as having a good job to less discussed aspirations such as safety and social acceptance. Using factor analysis, these unique dreams have been categorized into five equally important sub-indexes — economic situation, personal well-being, trust in institutions, attitudes toward diversity, and quality of the physical environment. The results of these five sub-indexes ultimately make up the overarching ADCI score.

In February 2014, the ADCI was reported to be 64.5 percent. This means, as a nation, residents collectively feel they have achieved only 64.5 percent of their American Dream. From an economic development professional’s perspective, strategic plans can (and should) be developed to help better enable residents to achieve the remaining 35.5 percent of their dreams. These plans will undoubtedly include a focus on job attraction, retention and expansion (for perspective the February 2014 American Dream Economic Index™ was reported as only 63.1 percent), but should also include strategies to better enable residents to make meaningful progress in achieving their dream for personal well-being (69.9 percent score), trust in 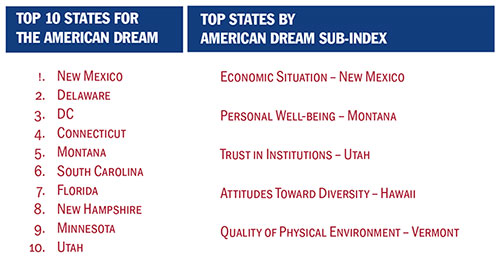 To make the ADCI data more actionable for economic development professionals to use in strategic planning, The Burghard Group has created a report that ranks the 50 states plus the District of Columbia on their success in creating conditions that enable residents to achieve their American Dream. It is a retrospective analysis of ADCI data collected in 2013.

Why do these data matter? The Burghard Group ran a separate study among business executives (n=83) and discovered:

“The greater the number of people who pursue their dreams, the healthier America’s economy is.”

In addition to the ranking based on ADCI score, state performance in 2013 versus 2012 is presented in the report. (For a free copy of the report go to strengtheningbrandamerica.com.)

In a winter 2014 edition of The Ripon Forum, Dr. Greg Smith, co-inventor of the ADCI and chair of the management information systems department, and Roger Fortin, academic vice president and provost for Xavier University, wrote, “Fundamentally, the American Dream is about hope — the hope that every individual of whatever status has the chance to be all that he or she can be. It is America’s highest aspiration and promise and is inextricably bound to our nation’s ideals of freedom, equality, justice, and opportunity for all people. Individuals’ pursuits, collectively, constitute the moral and economic engines that drive this nation forward. As the ADCI surveys show, there is a direct relationship between the number of individuals who pursue the American Dream and the health of society. The greater the number of people who pursue their dreams, the healthier America’s economy is.”

Rather than evaluate the performance of the economic development profession on year-over-year job growth, Xavier University’s groundbreaking research allows performance to be measured on the degree to which a location enables its residents to achieve their American Dream.

Using the ADCI as a performance metric will catalyze a shift in the profession’s paradigm to “resident is boss” and lead to more robust strategic choices around local asset creation, infrastructure investment and public policy reform. Add the ADCI to your community’s performance dashboard or planning process, and you may be surprised at how it will change the dialogue and impact strategic decisions.

To paraphrase Dr. Smith and Roger Fortin, enabling residents to better pursue their American Dream leads to a healthier society and healthier economy. And, isn’t that why you got involved in economic development in the first place?

Ed Burghard is a branding expert and creator of the Strengthening Brand America Project (www.strengtheningbrandamerica.com).