Rural communities now can make site selectors aware of locations that would not otherwise have been noticed. 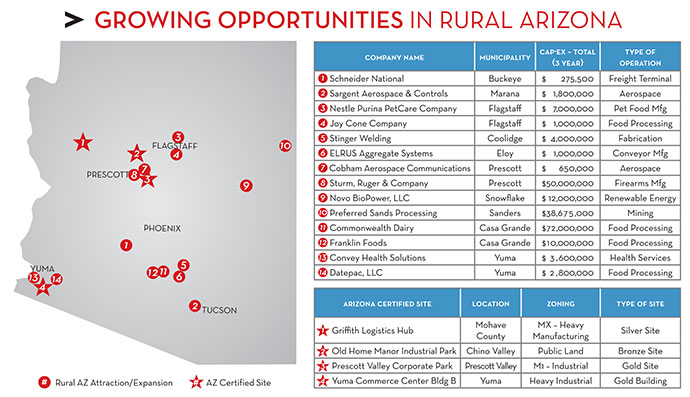 rizona site options extend well beyond the Phoenix and Tucson metro areas, as companies in Coolidge, Snowflake, Buckeye and other rural communities can attest. But how do they make it onto the radar screens of site selectors? Usually, they don’t.

That’s why the Arizona Commerce Authority (ACA) launched its Certified Sites program in September 2013. The program (www.azcommerce.com\programs\certified-sites.com) is intended to “enhance the visibility of commercial sites in rural Arizona that are ready for business and available for base industry employers.”

Four sites are certified so far — in Mohave County, Chino Valley, Prescott Valley and Yuma (see map). Forty-six more are in the pipeline for certification. 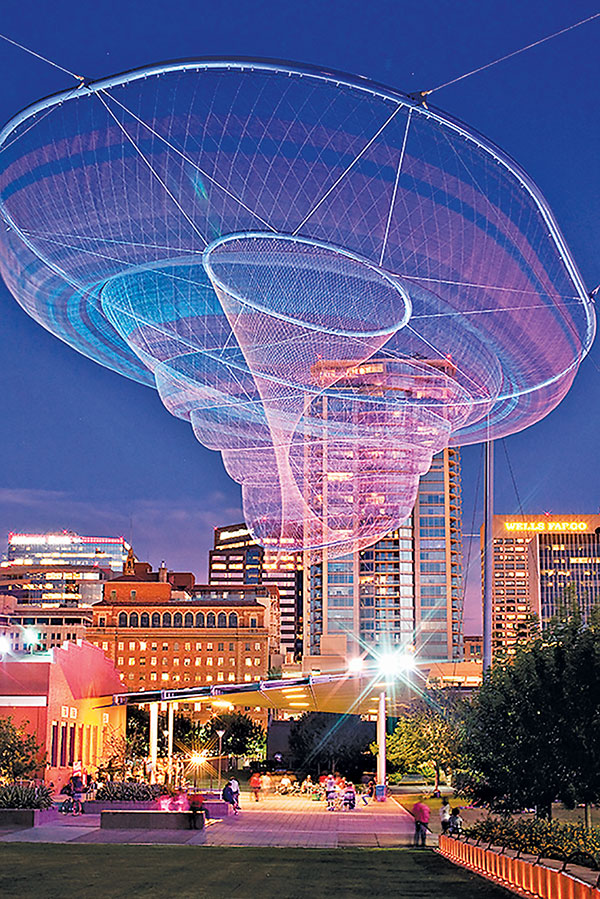 “Rural areas often find themselves at a distinct disadvantage for a number of reasons, some of which we may be able to influence, some of which we cannot,” says Keith Watkins, senior vice president, economic/rural development at ACA. “Areas we can get involved in are education of local communities and their leadership on what to expect and by omission what not to expect — in other words, to be reasonable. So many times they are shooting for the moon, which is admirable, but it’s not reasonable.”

Infrastructure is another area where ACA works with rural communities, says Watkins, because it “has long been a weak point in rural communities across the country, and Arizona is no exception. We are focusing on infrastructure that serves employment-related uses, because a subset of infrastructure, of a deficiency thereof, is a lack of suitable real estate. Normally, that’s the commodity we are selling, like the car on the car lot.”

Watkins says ACA has set aside $2 million annually to put toward a rural grant dedicated to infrastructure-related projects that are employment-use oriented. Funds must be applied to construction, so engineering and environmental studies must be complete for a grant request to be honored. “We don’t want public dollars to go to a study or report that will sit on a shelf because the project cannot move forward,” he explains. Matching funds are required for grant awards, notes Watkins, “and we want to see tangible results come out of this.” Roadway improvements for industrial areas, broadband service extensions, water line upsizing and wastewater treatment plant upgrades are among the potential uses of the infrastructure grant.

Awards are capped at $500,000 per award and are linked to certified sites in the event a community has a site or sites that would be certified if they only had, for example, a water main or broadband. ACA worked with Glendale, Ariz.-based site consultant Deane Foote to design the certified sites program, which like most such programs is gold-, silver- and bronze-delineated.

“It’s unique in that it involves a certified buildings program so that available buildings can also be certified,” says Foote. “It’s probably the only program in the country where the two are attached. The state recognizes the importance of having an inventory of buildings. In time they will have a good number of sites and buildings that are ready to go.”

“In general, the business climate has improved,” says Foote. “Removing the electricity tax on industry could certainly help spur some development. Job growth has been phenomenal, companies are growing, and a lot of entrepreneurial activity is taking place in Arizona, much of which is coming out of California. That’s where we’re seeing most of our projects originate. These companies don’t want to do business in California because of the regulations and cost, and Arizona is a logical first step in addressing that.”

Governor Jan Brewer and Sonora Governor Guillermo Padrés announced in February a new partnership to recruit technology companies from around the world to do business in the Arizona-Sonora region. Global Advantage — a collaboration between the University of Arizona Tech Parks and the Offshore Group — underscores the governors’ commitment to enhancing job growth and global competitiveness near the border.

“If Arizona is to remain competitive in the global economy, it is crucial that we continue to seek and support productive international partnerships,” said Arizona Governor Jan Brewer. “This venture will foster economic development and create jobs for Arizona and Sonora while attracting business investment worldwide. It is a perfect example of the regional opportunities on which Arizona and Sonora should continue to capitalize.”

The partnership will leverage the benefits and assets of the border region while offering international companies a competitive and attractive location in which to do business. Global Advantage will allow companies to conduct advanced research and development at Tech Parks Arizona and provide high-tech manufacturing capabilities, administrative and support services and access to a skilled work force at one of the Offshore Group’s facilities in Sonora. By capitalizing on the expertise and core competencies of both organizations — which combined offer nearly 50 years of business experience — Global Advantage will help secure long-term economic opportunity and prosperity for both Arizona and Sonora.

This partnership enables Arizona and Sonora to become a single region, working together not as two separate states, or countries, but as a single, unified economic region.

“This partnership enables Arizona and Sonora to become a single region, working together not as two separate states, or countries, but as a single, unified economic region,” said Sonora Governor Guillermo Padrés. “Sonora and Arizona’s cooperative relationship has been and will continue to be a model example of collaboration among the entire border region that greatly benefits the citizens of both states.”

Global Advantage has received significant attention from international organizations in Israel, Korea and Europe. Recently, the Global Advantage team traveled to Israel to present and promote this partnership to Israeli government officials, business and trade organizations and high-tech companies. The response was overwhelmingly positive, with several Israeli companies expressing a strong interest in expanding to the US market.

At the Arizona-Mexico Commission’s Plenary Session in Hermosillo, Sonora, earlier this year, Governor Brewer and Governor Padrés announced plans to capitalize on this interest and drive these companies to the Arizona-Sonora region. Later this year, the governors will lead a business and trade mission to Israel to meet with companies 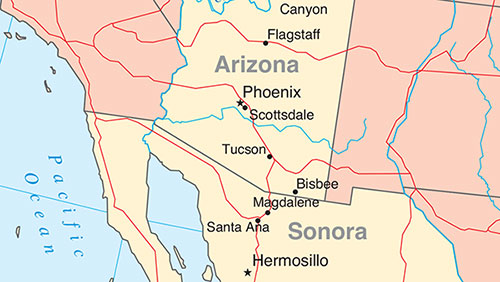 looking to become Global Advantage clients, with the ultimate goal of boosting international ties and enhancing the long-term economic competitiveness of both states.

Israel is widely regarded as one of the world’s leading centers of technology innovation and the source of a large number of technology companies interested in entering the North American market.

Leclerc Foods USA, a North American maker of cookies, snack bars and crackers, announced in February the acquisition of a 166,500-sq.-ft. (15,470-sq.-m.) building in the Freeport Business Center for expansion of its food manufacturing operations in Phoenix.

“This acquisition fits our business vision and corporate development strategy. It will allow us to position ourselves near our US clients as well as hone in on food trends on the US West Coast,” said Denis Leclerc, president of Leclerc Foods USA. This acquisition represents growth potential that will enable Leclerc Foods USA to set up strategic locations in order to more easily serve markets such as the US West Coast, Mexico and South America.

“This acquisition will allow us to position ourselves near our US clients as well as hone in on food trends on the US West Coast.”

“Not only are we increasing our production capacity, but we will also achieve substantial savings on transportation costs by being closer to key markets,” explains Leclerc.

Resulting from an investment of nearly $50 million over a three- to five-year period, this latest addition to the US footprint of Leclerc Foods USA will generate up to 100 new jobs.

Gigya, the Conected Consumer Management Suite, announced November 5, 2013, that it has selected Arizona as the site of its corporate expansion after a multi-state competitive process. The company credits Arizona for its competitive business costs, strong portfolio of successful technology companies and highly skilled, available tech talent. The expansion will create 200 high-wage jobs in the next three years.

Gigya offers a Connected Consumer Management Suite that enables more than 700 of the world’s largest brands to understand and connect more closely with today’s mobile and socially connected consumers. The company’s technology is used by businesses such as Pepsi, Verizon, and ABC.

“We are thrilled to announce the official opening of our office here today,” said Patrick Salyer, CEO, “and we will be hiring many more to help us continue our rapid expansion as we build a large, sustained presence in Phoenix.” Gigya recently raised $25 million to keep up with its increasing customer demand, prompting rapid expansion. The company will build its presence overseas, bolstering its office in London and also plans to expand domestically. Because of Arizona’s concentration of highly skilled talent and expanding clusters of technology innovation, the Arizona office will serve as a critical component of Gigya’s domestic corporate growth.

Arizona Gov. Jan Brewer on April 11th signed into law SB 1413, which eliminates the state’s Transaction Privilege Tax (sales tax) on energy sold to manufacturers, making her state more competitive for industry. The governor made passing this legislation a cornerstone priority her 2014 State of the State address in January.

“In the past five years, we have worked relentlessly to position Arizona as a premier location in which to start or grow a business — and we’ve been successful because we’ve listened to what companies want and need to thrive,” said Governor Brewer. “Due to several critical reforms — including last year’s measure to simplify our sales tax code — Arizona is now consistently regarded as one of the 10 best states in the nation in terms of economic development and competitiveness.

“Arizona is now consistently regarded as one of the 10 best states in the nation in terms of economic development and competitiveness.”

“Until today, Arizona has still been one of only a few states to impose a sales tax on businesses for energy they use to manufacture products — and that’s put us at a disadvantage with other states. Signing SB 1413 affirms our message that Arizona is open for business.”

The cost of energy is a key factor businesses consider when determining where to locate. As a champion of business growth and job creation, Governor Brewer has long called for the Legislature to support efforts that boost Arizona’s competitiveness, particularly in technology and manufacturing sectors, which bring high-paying jobs to the state. SB 1413 makes all manufacturers, regardless of size, eligible for the energy sales tax exemption.