A state on the move sees new investment from aerospace, energy and wind. 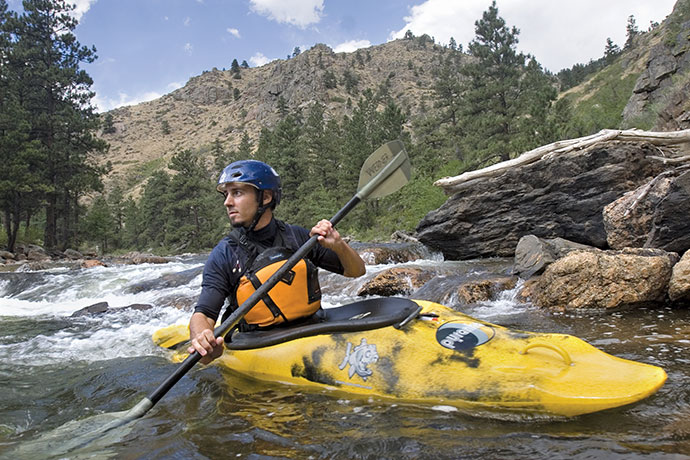 igh-tech firms continue to grow in the rare air of Colorado. Vestas is hiring 850 people at its four plants in the state after a banner year of orders in 2013. And four of the top 10 corporate facility projects by capital investment since January 2012 are from aerospace companies: Lockheed Martin Space Systems in the Denver community of Waterton, Intrex Aerospace in Thornton, Ball Aerospace & Technologies in Boulder and Woodward Inc. in Fort Collins, where the company is investing $169 million in a new headquarters campus.

Woodward broke ground last May on the new campus for its corporate headquarters and Industrial Turbine Systems business at the former Link-N-Greens golf course in Old Town Fort Collins. The groundbreaking at the 101-acre (41-hectare) site concluded a nine-month process during which Woodward reviewed multiple options among several states. Agreement on a project plan and support package was reached among Woodward, the State of Colorado, the City of Fort Collins and the Fort Collins Downtown Development Authority in March, and the site was purchased on April 30, 2013.

Woodward Chairman and CEO Thomas Gendron said, “We have had very good success in winning new business and recognized the need for new capacity. We know Woodward is in a competitive community with a skilled workforce that has good infrastructure and a good quality of life that allows us to attract and retain excellent workers.” 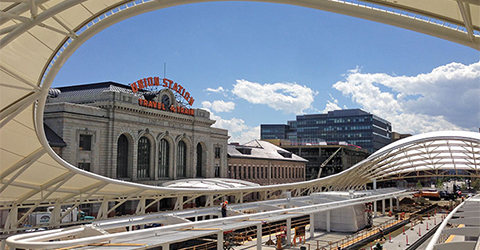 Denver ranked first in U.S. News and World Report’s latest ranking of the top 10 U.S. cities for public transportation. Thanks to the Regional Transportation District’s FasTracks program, Metro Denver is undergoing the nation’s largest public transit expansion with the addition of five new light rail lines that compliment the existing three lines already serving Denver and its south suburbs. Each of the new rail lines brings opportunity for transit-oriented development in the Denver Metro area, such as the Olde Town Arvada site being developed by Trammell Crow near a station on the Gold Line.

By 2016, Denver will have three commuter rail lines for the first time in city history — including one that takes passengers to to Denver International Airport in about 35 minutes — a fourth light rail line, and a new bus rapid transit system. Among the projects is the nearly complete mixed-use redevelopment of Union Station (above), which welcomed Amtrak’s California Zephyr service back in March 2014. The Union Station Transit Center offers bus, light rail, a new 22-gate bus concourse, Amtrak, and, soon, commuter rail. FasTracks is projected to create more than 10,000 jobs during the height of construction.

The facility could become a national model for employment center infill in a downtown area.

Woodward is donating 31 acres (12 hectares) of riverfront property to the city for restoration to its natural state along with improvements to trail and nature sites along the Cache la Poudre River. The site was originally settled in the late 1850s by John Coy, whose descendants attended the event. In 1858, Mr. Coy and his family traveled by covered wagon from Cuba, Mo. The barn, which was built in 1869, will be preserved.

Though the project had no opposition when it went before the city’s planning and zoning board, the retention of Woodward’s HQ came despite what David May of the Fort Collins Area Chamber of Commerce said area business leaders called anti-business rhetoric and policies from the Fort Collins City Council.

“The City of Fort Collins was very interested in keeping us in the city,” says Don Guzzardo, director, investor relations for Woodward. “We looked at other areas around Colorado and even outside Colorado, but ultimately we wanted to stay in the area, because the most important asset in our business is our people. They know our products, and developed them in some cases, decades ago.”

Upon completion, Woodward expects to hire 185 new employees and relocate 515 employees to Fort Collins from nearby with average salaries of $76,000 per year. Over the first 16 years of the project, it’s projected to create net benefits totaling more than $31.6 million for the city, Larimer County, the Poudre School District and the city’s Downtown Development Authority. Woodward generates over $2 billion in sales per year, said the city documents. 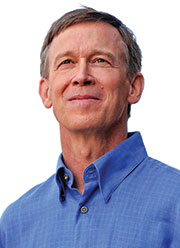 “We shouldn’t look for ways to stand in the way of smart, responsible business as it develops, rather, we should be by their side — all over Colorado, but especially in areas that need it most,” Hickenlooper said.

Among projects helped along by REDI are TK Mining’s expansion in Delta; Eddyline Brewing’s $1.4-million, 18-job cannery expansion in Buena Vista; and food distributor Smirks’ reuse of a former correctional facility in the Morgan County city of Brush. REDI has a total grant budget of $2.7 million, of which $530,000 has been awarded. There are currently seven projects under consideration, representing $20 million in capital investment and more than 150 rural jobs.

Among Hickenlooper’s stated goals during this year’s legislative session is the extension of the state’s job-creation tax credit from five years to seven.

The documents concerning “Project Blue Home” detail an incentive of more than $2.2 million from the city and its Downtown Development Authority as a reimbursement reserve for the project, in case the more than $16.7 million in tax-increment financing to make infrastructure improvements falls short of required investment. Approximately 70,000 sq. ft. (6,503 sq. m.) of office and commercial development is planned for the area. The combined building footprint of the industrial/manufacturing facility is projected to be 600,500 sq. ft. (55,786 sq. m.) in buildings ranging from one to three stories. The company’s current HQ on Drake Rd., which the company had outgrown, will remain part of Woodward’s operations.

Woodward, which is also making major investments in Rockford and Niles, Ill., has been based in Fort Collins since 1955, and serves both the aerospace and energy markets with its range of controls equipment. In addition to the amount invested in buildings, Woodward is investing $50.5 million in new equipment. Fort Collins City Council will rebate 80 percent of the use tax collected in connection with these investments. The actual amount of the use tax rebate will be tied to Woodward achieving an employment level of 1,400 by the end of 2018.

Though the campus of Colorado State University is near the new campus location in the city’s Old Town section, Woodward is one of the few major business to locate there, says Guzzardo, and future phases of development of the area will bring in mixed-use establishments.

“That expands the downtown area, and brings in creased economic activity and people to support growth for decades to come,” he says. “I’m out at restaurants at night and people stop by and say how thankful they are we stayed, and that we’re locating downtown. We think everyone wins, both the city and Woodward.”