The Global Best
to Invest Report

ite Selection is pleased to present its sixth annual Best to Invest rankings of nations and metro areas for investment-attraction activity in 2013. The national Investment Promotion Agencies and metro areas recognized here were particularly successful in 2013 at attracting capital investment projects — both expansions of existing facilities and new projects — from investors at home and abroad.

Site Selection’s proprietary New Plant Database is the foundation of several rankings of area economic development performance each year, including The Governors Cups, Top Competitive States and Top Business Climates. Measured solely by the number of qualified projects resident in the database, China ranks first globally (excluding the United States), with 235, followed by Germany (196) and the United Kingdom (187) — see the chart below.

This illustrates the durability of the Chinese economy, even as indicators point to a slowdown in economic growth to 7.4 percent in the first quarter (still enviable in most quarters), and a possible contraction of its manufacturing sector. The latter is according to one measure so far — the HSBC Flash China Manufacturing Purchasing Managers’ Index™ (PMI™), which registered an eight-month low of 48.1 in March. Scores below 50 are considered to be in the contraction zone.

Such indicators are behind recent moves by the Chinese government to stimulate economic activity, including acceleration of rail infrastructure investment by 18 percent and income tax relief for smaller companies — part of a broader agenda to make capital more available to small businesses. 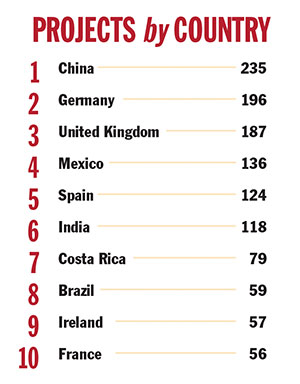 The bottom line, as Site Selection’s project tallies illustrate, is that China’s economy is still growing — robustly. It’s the market multinationals and many others simply need to be in, whether to supply the local market or those elsewhere. Other national Asian markets score higher according to the Best to Invest methodology. But only China claims five of the top 10 Best to Invest metros — Shanghai (1), Tianjin (3), Chongqing (4), Beijing (6) and Dalian (9). No other market comes close. Now on to the rankings.

Fifty percent of the national Best to Invest rankings were based on growth in new facilities, capital investment and job creation using data from Conway Data’s New Plant database and from IBM-PLI’s database of new projects for calendar years 2012 and 2013. Each country was ranked on the total number of projects, investment and jobs created both as raw value and as a per capita value.

The other 50 percent of the ranking was based on the Location Rank and Competitiveness Score resident in LocationSelector.com’s proprietary database using these factors: business costs, economic strength, infrastructure; regulatory burden; and tax rates. Additional bonus points were given to those countries that were ranked among the top 50 destination countries by jobs created as identified in IBM’s Global Locations Trends Report.

Fifty percent of the Best to Invest metro rankings were based on growth in new facilities, capital investment and job creation using data from Conway Data’s New Plant database and from IBM-PLI’s database of new projects for calendar years 2012 and 2013.

The other 50 percent was based on the Location Rank and Competitiveness Score using LocationSelector.com’s proprietary database using these factors: economic strength and infrastructure (physical capital).

Additional points were given to those metros that ranked among the top 50 metro destinations for Foreign Direct Investment Projects as identified in IBM’s Global Location Trends report.