Can any place on earth match the US head start with LNG? As permit delays continue, plenty are trying. 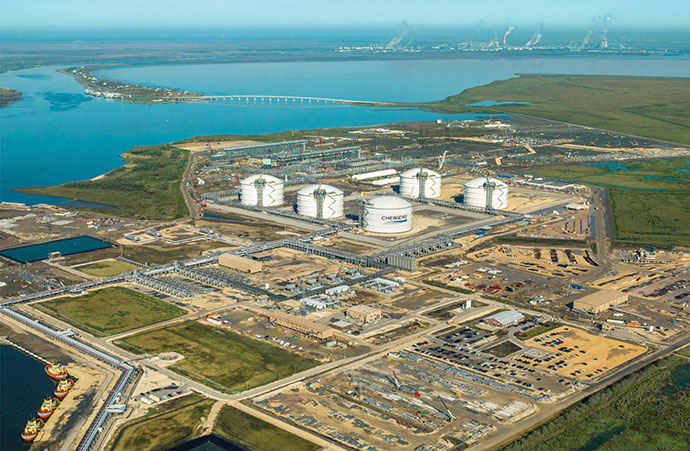 he race to capture pots of gold at the end of the liquefied natural gas rainbow is intensifying. As many as 21 domestic energy companies are focusing on a handful of locations in US states along the Gulf, East and West Coasts as they compete to get regulatory approvals and financing to build multi-billion-dollar LNG export facilities.

Thanks to its decisive first mover advantage, Cheniere Energy Inc. will be the first to cross the starting line. It will begin exporting LNG to Europe and Asia before celebrating New Year’s Eve 2016, according to Charif Souki, its president and CEO. The company began converting its import facility to an export facility along Louisiana’s Gulf Coast (pictured) just before domestic natural gas production soared with advances in drilling technology that drove domestic prices down as prices abroad soared much higher.

Domestic drillers will have the upper hand if firms seeking to export LNG can acquire all the necessary local, state, environmental and federal approvals in a timely manner, according to the American Petroleum Institute (API). They can produce natural gas cheaply and have it shipped to the rest of the world at premiums ranging from 200 percent in the UK, Spain and Belgium to as high as 400 percent in South Korea, Japan, India, Brazil and Mexico. According to the McKinsey Global Institute, approving pending LNG export applications would increase US exports between $11 billion and $27 billion annually.

What’s the holdup? Under current US law, energy companies looking to export domestic natural gas to countries that don’t have a free trade agreement with the US need approval from two regulatory bodies — the US Department of Energy, which determines whether the project is in the public interest, and the Federal Energy Regulatory Commission, which ensures that the project meets a list of environmental and safety guidelines.

Only special approval from the Department of Energy can allow exportation to non-FTA countries, where most of the LNG demand is located, according to GlobalData, a research firm that specializes in the health and energy industries. China, Japan, Taiwan and India are all classified as non-FTA. “These countries are critical to US companies seeking to grow LNG trade,” says GlobalData’s Carmine Rositano.

API and other pro-industry organizations are lobbying the Obama Administration and Congress to speed up the licensing of export terminals (called liquefaction plants) and the legalization of crude exports. Consulting firm Tudor Pickering Holt & Co. estimates that US energy companies can generate $93 million per day exporting LNG at Japan’s current import price of $15 per million BTUs. By itself, Japan, whose use of natural gas increased 30 percent after the Fukushima nuclear disaster, will generate over $30 billion of new income each year. China’s National Energy Administration (NEA) predicts the country will import 35 percent of its natural gas needs by 2015. India is expected to begin importing LNG by 2015 as well. And most of the biggest economies in Europe are also major importers of natural gas.

Houston-based Cheniere’s timetable for the start of production puts it in the sweet spot. It’s the only LNG operator to have received all necessary approvals to begin export shipment (a process that, to date, takes years to complete). And a growing list of customers already have signed on to long-term supply agreements. The company, which has yet to earn a dollar on its LNG operations, will need every penny to begin paying off its huge investments in infrastructure.

Demand projections and bankable contracts persuaded Cheniere to expand its original vision for its existing but unused import terminal located on over 1,000 acres of land along the Sabine Pass River on the border between Texas and Louisiana, in Cameron Parish, La. Originally estimated to cost $6 billion, the project’s price tag was pegged at $12 billion as recently as March. Cheniere’s recent decision to expand its facility from four trains to six trains (an LNG train is a plant’s liquefaction and purification facility) is bumping costs to $20 billion for a company with a $16-billion market cap. It’s also increased the number of construction workers on the site to 2,800.

“We’re currently permitted and approved for four trains,” says Jason French, director of government and public affairs for Cheniere. “Train five’s production is completely sold out so we’ll go forward and get approvals to start building train six.” Cheniere’s contracts are for 20 years; they also include 10-year options. “The price for our LNG is pegged to the current price [of LNG] at the time of delivery. We’re paid a set fee to process natural gas to liquid and then load it on ships,” he says. “The cost of transportation is arranged by the customer with the shipper.”

Demand from major customers — Total, British Gas, Centrica, and Endesa — is spurring construction plans for additional Cheniere LNG facilities in Texas as well as spurring related business opportunities both upstream and downstream of the Sabine Pass LNG terminal. A long-term sale and purchase agreement signed in April with Endesa, a Spanish multinational, will jumpstart the ground-up construction of a three-train liquefaction project in Corpus Christi, Texas, in early 2015, according to French. The facility will be built on the La Quinta Channel, on the northeast side of Corpus Christi Bay. Cheniere will also build three storage plants. Bechtel Oil, Gas, Chemicals, Inc., is responsible for design, engineering and construction. The timetable to begin shipping LNG is 2018.

Dominion Resources is the odds-on favorite to be the next energy company to receive approval to export LNG. It’s also converting an LNG import terminal to an export terminal. Dominion’s Cove Point $3.8-billion facility is located on the Maryland coast, putting it in ideal position to receive gas from the Marcellus and Utica shale plays and deliver LNG to Europe.

Other contenders for final approvals include Freeport LNG on Quintana Island, Texas, and Cameron LNG in Louisiana.

Canada has been watching the progress of the US LNG sector with keen interest. Canada’s National Energy Board (NEB) gave approval in mid-April to Triton LNG Ltd. for a 25-year application to export LNG from a port facility to be located either at Prince Rupert or Kitimat, BC. Canadian Prime Minister Stephen Harper, who recently signed a free trade agreement with South Korea, noted that Asian markets are among the world’s largest customers of LNG.

US-based LNG operators also will be competing against Qatar, the current global leader, as well as facing challenges from liquefaction coming on line in Papua New Guinea and Australia, with the Gladstone, Gorgon, Wheatstone and Queensland terminals. GlobalData forecasts that US liquefaction will only have a 5-percent share of global LNG capacity in 2017, while Australia will take the global lead with a 20-percent market share.

Industry analysts also have their eyes on oil giant Royal Dutch Shell, which is building the world’s first floating LNG tanker. Despite estimated multi-billion-dollar price tags per ship, they are considered cost-efficient because they won’t require pipelines or need to operate onshore storage facilities. ConocoPhillips, France’s GDF Suez and Malaysia’s Petronas all have announced plans to build FLNG tankers in the coming years.

Cheniere’s French puts it all into perspective: “While the competition for approvals and for contracts is tough, we’re not at each other’s throats,” he says. “The world’s energy needs continue to rise on an annual basis. The demand for natural gas isn’t going away. We will continue to seek new opportunities, as will our competitors.”