Sectors beyond energy add zip to Gulf of Mexico economies. 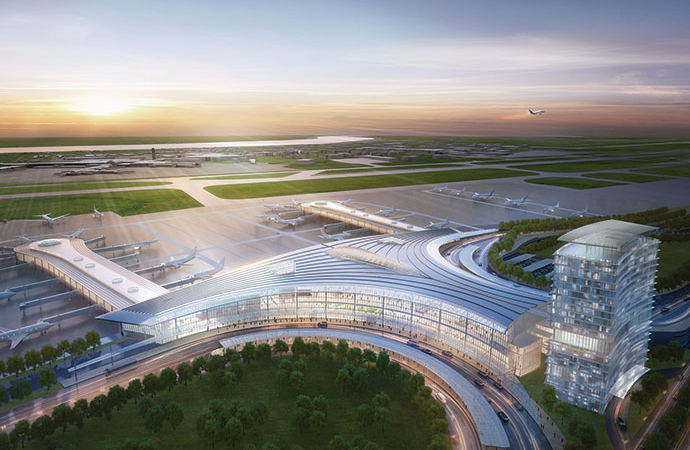 ong before the nation’s reshoring phenomenon took hold, there was an actual shoreline doing its part for the US economy. It’s still holding its own, and the Gulf Coast is still doing its share.

The National Ocean Economics Program (NOEP) of the Center for the Blue Economy earlier this year released its State of the US Ocean and Coastal Economies 2014 report. In 2012, the 446 coastal zone counties in 30 states (including the Great Lakes) accounted for 51 percent of employment in coastal states; 42 percent of total national employment; 57 percent of GDP in coastal states; and 48 percent of national GDP.

Tourism and recreation is the largest employment sector in the ocean economy, comprising over 1.9 million jobs or 70 percent of all marine-related employment. Minerals (i.e. oil and gas) makes an ocean economy GDP contribution of 33 percent. Its average employee contribution to GDP in 2010 was $606,000, while the average tourism and recreation employee contributed $46,000 to GDP.

But there are other sectors pulling their weight along the Gulf’s shores, including freight and logistics, software/IT, and aviation/aerospace. 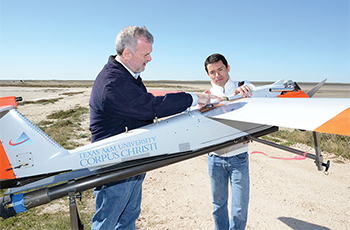 In April the software and IT services firm 4th Source Inc. announced it was moving its corporate headquarters from Canton, Ga., north of Atlanta, to the Greater New Orleans municipality of Kenner. The near-shore technology services firm, which maintains three US offices in Canton, Denver and Memphis as well as three successful hubs in Merida, Colima and Mexico City, Mexico, will create 320 new direct jobs by 2018 at its fourth US office, just five minutes from Louis Armstrong New Orleans International Airport. The airport, which saw air service growth of 7.1 percent in 2013, early this year unveiled renderings for its forthcoming $826-million new North Terminal, which will include 30 new gates and a fast flyover road connection to I-10.

“The comprehensive list of incentives and support provided by LED and JEDCO are unmatched, based on our extensive review of alternative locations,” said 4th Source CEO Michael Wedge, noting the area’s “excellent high-technology talent pool.”

In an interview, Wedge says one of the motivating factors for US growth is increased customer demand from the public sector for more US-based sourcing of work. A business partner connected the firm with Louisiana Economic Development, affording Wedge’s team a look at, among other factors, the more than $100 million pouring into the university system from IBM and GE to drive programs in the IT space.

But there was another connection: Wedge was born and raised in Mid-City New Orleans, and went to high school in Kenner before moving away in 1980. “I am originally form the area, but had no idea it was the third fastest growing IT area in the country,” says Wedge.

The area earned another honorific this spring when the new KPMG Competitive Alternatives report rated Greater New Orleans as the most cost-competitive US city with a population between 1 million and 2 million, topping such areas as Nashville (2nd), Oklahoma City and Raleigh, N.C.

Edge says convenience to customers and the ability to attract talent helped make the Kenner choice the right one. “We looked at some areas where costs were lower and the potential was good,” he says, “but when you’re talking about attracting talent with top schools or degrees, it’s hard to get somebody to relocate to rural South Dakota or Nebraska. With New Orleans, and the programs and demographics, we didn’t need to go to the middle of nowhere to set up a base. We can be in a metropolitan area and have the same benefits.

The importance of the coastal economy is reinforced by Site Selection’s tracking of new private-sector facility investments in the energy-rich Gulf Coast states. The 141 Gulf Coast watershed counties and parishes includes 42 in Florida, eight in Alabama, 12 in Mississippi, 38 in Louisiana and 41 in Texas. Since January 2011 those jurisdictions have attracted an astounding 1,340 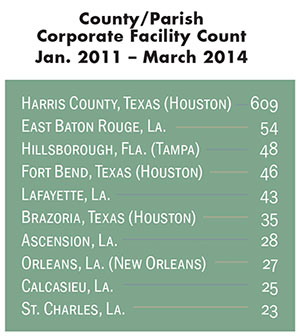 Honorable mention goes to the Mobile-area counties of Baldwin and Mobile in Alabama, with a combined 34 projects. Among them is a new $525-million glufosinate-ammonium plant from Bayer CropScience, the company’s single biggest facility investment in the German company’s history.

“I’m sure once the New Orleans center is open, we’ll see customers coming here too,” he says. “It’s much nicer than going to Bangalore.”

The Gulf Coast’s aviation/aerospace assets don’t stop there. The companies taking advantage of them are some of the biggest names around.