Forecast for Iowa? Sunny with no clouds, as investment into business climate and workforce pay off in the form of a record-setting project haul.

A cloud-based, software-as-a-service company that develops secure applications for complex business reporting, WebFilings is investing $15.5 million and creating 700 jobs at its headquarters in Ames.
Photo courtesy of WebFilings
by RON STARNER
W

hen Microsoft announced April 18 that it would build a $1.13-billion data center in West Des Moines, it confirmed what many corporate executives already knew about Iowa: The Hawkeye State is a magnet for business.

“As we strive to provide the best possible cloud infrastructure and services to our customers in Iowa and beyond, Microsoft is delighted to expand its data center operations in West Des Moines,” said Dayne Sampson, corporate vice president for Microsoft’s Global Foundation Services Group. “We value our strong working relationship with the City of West Des Moines and we greatly appreciate the support of the state and local officials in making the area an ideal location for Microsoft to grow in the continued deployment of our cloud solutions.”

From data centers and software development sites to advanced manufacturing plants and life-science operations, Iowa is increasingly providing the “ideal location” that corporate executives are seeking: a blue-sky economy with no threatening clouds on the horizon.

The proof is in the plant investments, which in 2013 and 2014 have taken a notable upturn. According to the Conway New Plant Database — the official scorecard of corporate facility investment for Site Selection magazine — Iowa ranked sixth in the nation in facility investment deals per capita last year, with 104 projects in a state of 3.1 million people.

Pound for pound, Iowa is outpunching heavyweights such as Michigan, Georgia and Illinois in projects per capita — and the upswing shows no sign of abating. 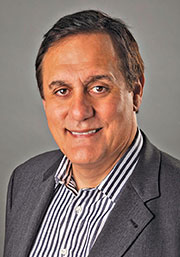 “When you are a startup and you are growing, you need a lot of help — financing, smart people, management. The type of people you attract is important, and the talent here is very desirable.”

“Iowa’s economy has been growing strong with momentum the last three years,” says Debi Durham, director of the Iowa Economic Development Authority. “Our manufacturing is strong, especially in heavy manufacturing, food production, automation and industrial machinery. And data center investment just keeps increasing. Google continues to expand its footprint, as do Facebook, Microsoft and others.”

The roll call of projects is astounding, led by Microsoft’s record-breaking facility investment in West Des Moines. Known as Project Alluvion, the announcement brings Microsoft’s total investment in Iowa to nearly $2 billion and is set to trigger business development in the south Polk County corridor.

West Des Moines has hosted Microsoft since 2010, when the Redmond, Wash.–based software conglomerate began building its first data center in the area to support exploding demand for the company’s cloud services. The new data center is expected to create 84 high-wage, full-time jobs.

“Beyond the enormous economic benefits associated with Microsoft’s expansion are the invaluable business relationships created with one of the world’s leading companies and the distinction that Iowa and West Des Moines are attractive destinations for the data center operations of global tech companies,” said West Des Moines Mayor Steve Gaer. “Data centers are today’s engine of economic development, generating substantial tax revenue and creating the momentum that draws other businesses.”

With Facebook building a $500-million data center in Altoona and Google expanding its existing data center by $400 million in Council Bluffs, Iowa has become a hot spot for huge enterprise facilities.

“They are very bullish on Iowa now,” Durham says of data centers. “We are seeing strength in the smaller data centers too. Insurers and financial companies are doing data storage here as well. A lot of this is happening because Iowa continues to invest into its broadband infrastructure. Gov. Terry Branstad is leading Connect Every Iowan — a full broadband deployment across Iowa — and is incentivizing the private sector to build out in new areas.”

Durham says the governor is not content to simply celebrate recent project wins, which have been substantial. Rather, she says, he is focused on investing even more resources into the two things that growing businesses need most: infrastructure and talent.

“As a result of these investments by the governor, we will see growth throughout Iowa,” Durham says. “A lot of our old-line manufacturers are being very innovative. Some are even becoming leaders in the green economy. Wind energy is a great example. MidAmerican Energy, based in Des Moines, is doing another major deployment — $1.9 billion of new wind blades around the state.” It’s the largest onshore wind turbine order in the world, and it’s from Siemens, which will make the blades for all 448 turbines at its Iowa plant in Fort Madison.

Durham says the governor is pushing two new initiatives to bolster Iowa’s economy — Home Base Iowa and a certified sites program. HBI seeks to capture the talent that is embodied in the form of exiting military, while the sites initiative seeks to meet the needs of discriminating site selectors.

“We are having our nation’s largest drawdown in military personnel since World War II, and we need to capture the skill sets of these exiting military, especially those service men and women who reside in Iowa,” notes Durham. “This initiative aligns well with Iowa’s needs for the future. Many of these former military workers have skill sets that translate to our targeted industries.”

A cloud-based, software-as-a-service company that develops secure applications for complex business reporting, WebFilings is investing $15.5 million and creating 700 jobs at its headquarters in Ames. 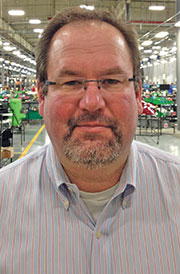 “Folks have a very strong work ethic here. They are people who really care about the company they work for, the products they make, and the customers they serve.”

Moving from California to Iowa

Rizai says a number of factors lured his firm to Iowa and help keep the company growing. “State leadership was crucial in bringing us from California to Iowa, and it still is,” he notes. “When you are a startup and you are growing, you need a lot of help — financing, smart people, management. The type of people you attract is important, and the talent here is very desirable.”

Rizai says it was important for the company to find state and local leaders who shared the firm’s vision. “When we were just starting out, I asked myself, where can I scale this company?” he says. “Gov. Branstad is a very visionary person, and I like that.”

Although WebFilings was founded in Silicon Valley, Rizai says he knew the venture would need a more welcoming business climate. “We immediately looked at Ames for the talent and the business climate,” he adds. “Iowa had a reputation for nurturing startup companies like ours, and Iowa was providing some original funding to get companies going in the right direction. Although we had opportunities to go to other places in the early 2000’s, we decided that Ames was where we wanted to grow.” 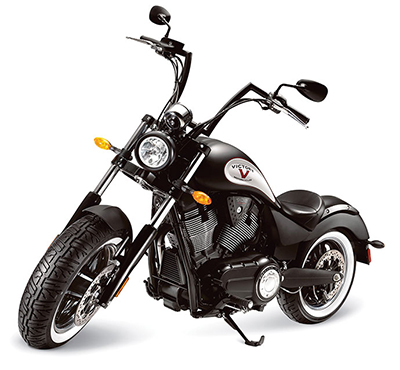 Rizai says he hasn’t looked back since. “Our biggest focus is to hire talent,” he notes. “The University of Northern Iowa, Drake, University of Iowa and Iowa State are all providing graduates who become interns and ultimately employees at WebFilings. They are so happy to have the opportunity to be able to stay in Iowa. Our jobs are in software and computer science, marketing, customer service, professional services and other positions, and we pay quite well. Our typical worker earns an average annual wage of more than $55,000. We also attract quite a few senior-level people from outside the state.”

Rizai says WebFilings likes Iowa’s low cost of living, low cost and high quality of health care, good schools and high quality of life. According to the Gallup-Healthways Well-Being Index, Iowa ranks as the 10th best place to live in the country and has shown the fourth-best improvement since 2010.

“A lot of people who are from the Midwest want to come back to live and work here,” Rizai says. “Quite a bit of economic benefit can be achieved here. And the biggest thing for us is that being located in Iowa is a fit culturally.”

Also finding the right fit in Iowa is Polaris Industries, a motorcycle and off-road vehicle manufacturer, which is creating 79 new jobs and investing $22.6 million into expanding its plant in Spirit Lake. 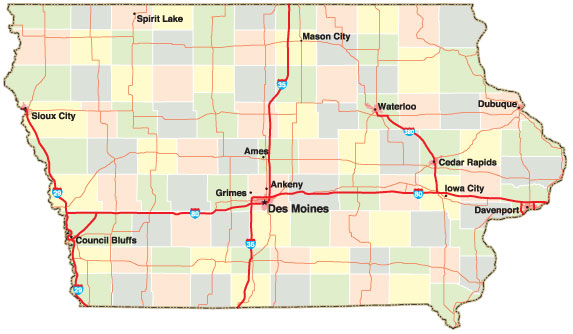 Plant Director Brian Hines says “the quality of the workforce in rural northwest Iowa” is the primary contributor to the company’s success. “Folks have a very strong work ethic here,” he says. “They are people who really care about the company they work for, the products they make, and the customers they serve.”

Hines says it helps that “the two communities we operate in — Spirit Lake and Milford 10 miles away — are very supportive of Polaris. That helps tremendously. We have doubled in size the last couple of years. The local and state governments have helped us do everything we can do to be more competitive. We have used a workforce training grant, a state incentive run through our local community college, for many years. We also qualify for local tax abatements and the Iowa Tax Credit. They have been very beneficial.”

Founded in 1958 in Roseau, Minn., Polaris has been making products in Iowa since 1994. The stunning success of its Victory and Indian motorcycle lines, along with the company’s global leadership position in ATV sales, confirms the wisdom of Polaris’ decision to locate manufacturing operations in Iowa.

Hines adds that “logistically, Iowa is the perfect location for Polaris. It is relatively easy to get to other regions of the US and Canada from here, because we are centrally located in North America.”

Support from state, regional and local economic development partners helps keep Polaris competitive, he notes. “We partner with the Iowa Lakes Corridor to get younger folks interested in pursuing a career in manufacturing,” he says. “Long term, we want to get kids to stay in Iowa and work in manufacturing. What we are doing is aligned with Gov. Branstad’s STEM initiative.”

Polaris and WebFilings are far from alone in Iowa. In the Greater Des Moines metropolitan area in the south central part of the state, companies are expanding like there’s no tomorrow.

In downtown Des Moines alone, more than 40 projects totaling $800 million are either under construction or in the planning stage. The largest of these is a $400-million makeover of the Principal Financial Group campus, slated to take place over the next seven to eight years.

Meanwhile, Fidelity & Guarantee Life Insurance redomesticated its headquarters from Baltimore to Des Moines, creating 50 new jobs, and Symetra Life Insurance out of Bellevue, Wash., relocated its life insurance unit to Iowa and plans to open an office in Des Moines.

This Investment Profile was written under the auspices of the Iowa Economic Development Authority.
For more information on Iowa, contact Tina Hoffman of the IEDA at 515-725-3150 or by email at tina.hoffman@iowa.gov. On the Web, go to www.iowaeconomicdevelopment.com.