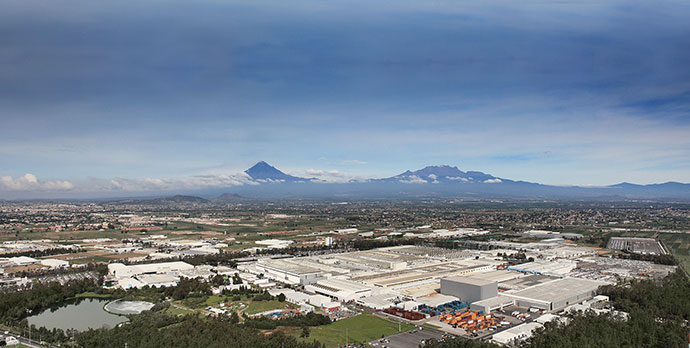 The Volkswagen plant in Puebla sits against the backdrop of the Izta-Popo volcanoes national preserve. Volkswagen de México this year committed to multiple new environmental initiatives in Mexico under its “Think Blue. Nature.” program.
Photo courtesy of Volkswagen AG
by ADAM BRUNS
T

oyota is establishing a new headquarters in North Dallas suburb of Plano, Texas, for its North American operations in a move designed to better serve customers and position Toyota for sustainable, long-term growth, said the company in late April.

Within the next three years, Toyota’s three separate North American headquarters for manufacturing, sales and marketing, and corporate operations will relocate to a single campus in Plano, which recently welcomed a massive corporate campus investment from State Farm Insurance on a parcel being developed by KDC.

At the same time, Toyota will expand the Toyota Technical Center (TTC) in Michigan to accommodate the relocation of direct procurement from Erlanger, Ky., to its campus in York Township near Ann Arbor. This expansion is part of an increased investment in engineering capabilities and will accommodate future growth in product development, said the company.

“With our major North American business affiliates and leaders together in one location for the first time, we will be better equipped to speed decision making, share best practices, and leverage the combined strength of our employees,” said Jim Lentz, named Toyota’s first CEO for the North America Region in 2013. “This, in turn, will strengthen our ability to put customers first and to continue making great products that exceed their expectations. Ultimately, enabling greater collaboration and efficiencies across Toyota will help us become a more dynamic, innovative and successful organization in North America.”

“The establishment of a new headquarters builds upon previous efforts by Toyota to enhance regional autonomy, self-reliance and responsibility,” said the company. 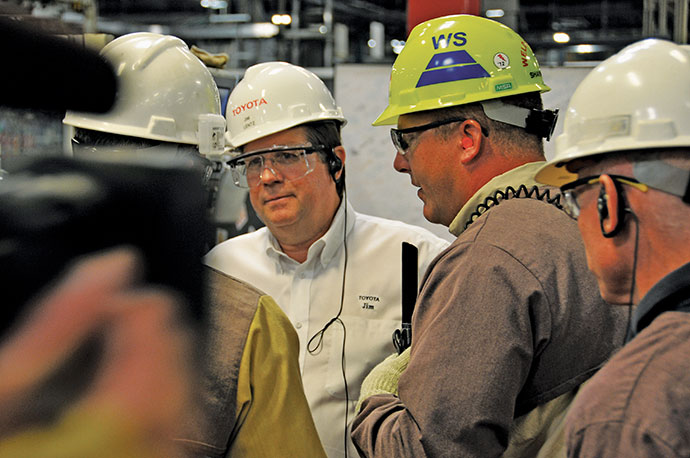 Toyota North America Region CEO Jim Lentz, shown here talking with team members at Toyota Motor Manufacturing, Indiana in July 2013, says consolidating three headquarters into one in Plano, Texas, is “the most significant change we’ve made to our North American operations in the past 50 years” and will enable greater collaboration and speedier decision-making.
Photo courtesy of Toyota

Toyota will construct a new, environmentally-sustainable campus facility in Plano, which is expected to take two or more years to construct after groundbreaking in the fall of 2014. Toyota will also build a new facility on TTC’s York campus (subject to final approval of state and local incentives) to accommodate approximately 250 direct procurement positions currently based at TEMA in Erlanger.

About 300 production engineering positions based in Erlanger will be relocated to a new facility to be built at Toyota Motor Manufacturing Kentucky (TMMK) in Georgetown, Ky., while approximately 1,000 TEMA administrative positions will transition to Plano. Toyota said its 10 US manufacturing plants will not be impacted by the changes, nor will such units as Toyota Racing Development and Calty Design Research in California or its operating units in Canada, Mexico and Puerto Rico.

After moving from its existing headquarters, Toyota will continue to have approximately 2,300 employees in California and 8,200 employees in Kentucky. This includes 750 new jobs being added at TMMK for production of the Lexus ES, which begins in 2015.

Since January 2012, North America has welcomed more than 680 automotive-related corporate facility investments, with the US accounting for more than 600 of those, according to Site Selection’s New Plant Database. But when sorted by capital investment, Mexico takes four of the top five spots, and about 6,500 jobs to go with those projects.

San José Chiapa, Mexico, is welcoming more than half of those jobs, at Audi AG’s $2-billion new plant in the state of Puebla, the carmaker’s first car factory on the continent, announced last summer. Starting in mid-2016, the successor generation of the successful SUV model, Audi Q5, will drive off the assembly lines at the 400-hectare (988-acre) site. Audi called it an “ideal environment” for the new plant: “As a bridge between the North and South American continents, the emerging economy with a large number of international free-trade agreements offers the best tax and financial conditions, a well-developed infrastructure and the high potential of well-educated employees,” said the project announcement. 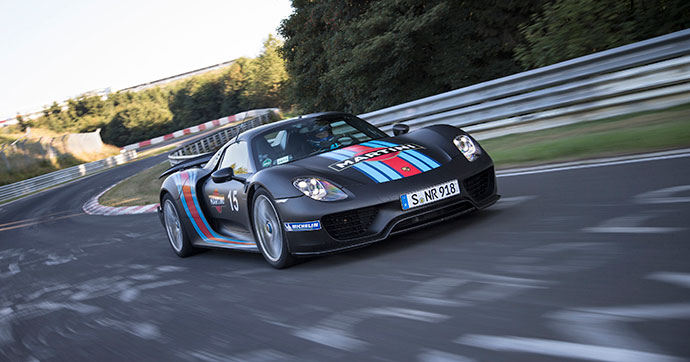 In addition to welcoming recent investments such as Voestalpine in Cartersville, Georgia is home to the nearly complete headquarters and testing track from Porsche North America near Hartsfield-Jackson International Airport in Atlanta. Meanwhile, the Georgia Ports Authority’s Atlantic Vehicle Processors facility at the Port of Brunswick is now the East Coast port of entry for the company’s hybrid 918 Spyder. Porsche aims to produce only 918 of them at its plant in Stuttgart. It accelerates from 0 to 60 in 2.6 seconds, yet sips fuel at an estimated 67 miles per gallon. The 918 Spyder broke the production car lap record in September 2013 with a lap time of 6:57 on the famed 12.8-mile Nürburgring north loop (pictured) in Germany.

“Speed and efficiency were also the reasons Porsche Cars North America decided to move its 918 Spyder through Colonel’s Island Terminal in Brunswick,” said Georgia Ports Authority Executive Director Curtis Foltz. “I hope I get a chance to drive one of these high-performance cars one day.” 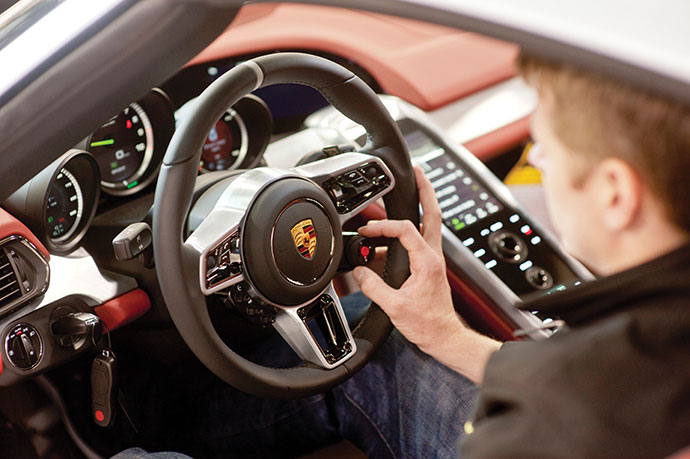 The interior of Porsche’s hybrid 918 Spyder automobile at the Atlantic Vehicle Processors facility at the Port of Brunswick, Ga., in March.
Photo by Stephen B. Morton courtesy of Georgia Ports Authority

The usual follow-on potential of supplier investment was eagerly anticipated by all concerned: Concurrent with the laying of the foundation stone, Audi hosted a supplier congress that featured 150 companies. The plant’s employment effect for the overall region should add up to 20,000 jobs, said the automaker.

The BMW Group in April announced it is expanding capacity at its US plant in Spartanburg, S.C., investing $1 billion by 2016 in order to answer strong global demand for the company’s BMW X models.

“This will increase annual production capacity by 50 percent up to 450,000 vehicles from 300,000 currently,” explained Chairman of the Board of Management of BMW AG, Norbert Reithofer. BMW Board of Management member for Production Harald Krüger called the Spartanburg plant “an important building block in our international network of 28 production and assembly facilities in 13 countries today” and “the best example of our successful strategy of ‘production follows the market.’ The state of South Carolina has supported us as a valuable and reliable partner throughout our 20-year involvement in the region and played a decisive part in making the US our second home.”

With the expansion’s 800 new jobs, the total BMW workforce in Spartanburg will number 8,800. A recent analysis from the Moore School of Business at the University of South Carolina found that BMW Group activities in South Carolina had a total impact of around $6.6 billion on the state economy. The BMW Group’s presence in the state supports a total of 30,000 jobs. The annual export volume of BMW’s Spartanburg plant totals $7.5 billion, making BMW’s US facility the largest vehicle exporter in the United States, based on total exports excluding NAFTA. Approximately 70 percent of Spartanburg’s production is exported to markets around the world.