Hydropower is the secret sauce for major aluminum investment, as long as prices stay where the companies want them. 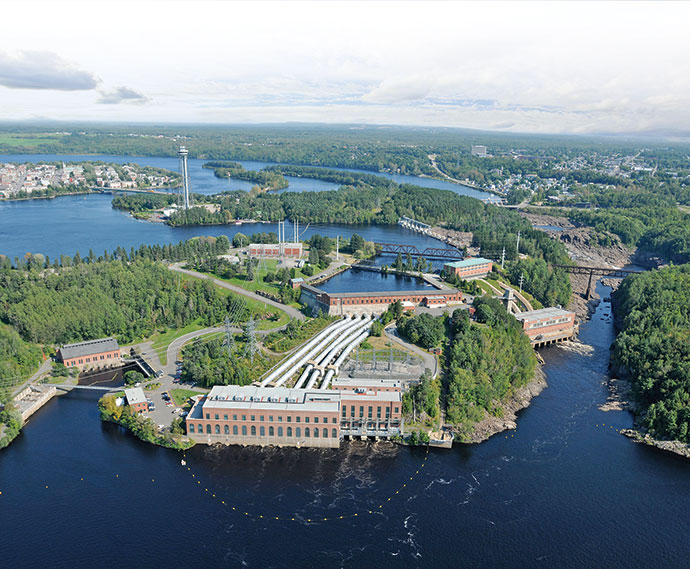 Hydro-Québec’s Shawinigan 2 and Shawinigan 3 hydropower generating stations are part of the utility’s network of 60 power plants.
Photo courtesy of Hydro-Québec
by ADAM BRUNS
A

lcoa is taking measures worldwide to reduce high-cost smelting capacity. But the company is striking a different chord in the often strike-prone territory of Québec, where Alcoa and the provincial government announced in February an agreement to improve the competitiveness of its three smelters, securing 3,000 jobs. Alcoa’s activities generate more than $1.5 billion in economic impact annually in the province.

Under the agreement, Hydro-Québec, which in April celebrated its 70th anniversary, will renew Alcoa’s power supply contracts for the Becancour and Deschambault facilities until 2030 and for the Baie-Comeau plant through 2036. The agreement enables Alcoa to proceed with $250 million of planned investments at the smelters over the next five years to further improve their competitiveness. As part of that investment, Alcoa will increase production of aluminum used for auto manufacturing and reduce production of commodity-grade aluminum at the Baie-Comeau casthouse to capture demand from automakers as they turn to aluminum for more fuel-efficient vehicles.

According to automakers, said Alcoa, aluminum body sheet content in North American vehicles is expected to quadruple by 2015 and increase tenfold by 2025, from 2012 levels. A previously planned modernization of the Baie-Comeau facility will no longer be pursued.

“Alcoa’s facilities in Québec can now concentrate on meeting growing global demand for aluminum and continuing to provide important economic benefits to the region,” said Martin Brière, president of Alcoa Canada Global Primary Products, calling the agreement “a new start” for the company’s smelters in the province.

The agreement marks a truce after the company, in a re-enactment of a similar stand-off in Tennessee, last fall had stated it would significantly reduce power use in Québec starting in November 2014 because of Hydro-Québec’s plans to hike power prices in 2015. “A competitive power rate is needed that allows Alcoa to continue to invest in its operations and maintain its important economic impact in Québec,” Alcoa said then. “The rate must be competitive on a global scale and flexible enough to adapt with changing aluminum market conditions.”

Alcoa originally looked to Canada after World War I due to the increasingly expensive power rates in the US.

The shift for Alcoa comes amid a concurrent political shift. Marois, of the secessionist Parti Quebecois, made her final speech as premier in April after the Liberal Party came to power in the April 7 election, and Philippe Couillard took over. Among his first steps was the appointment of Jacques Daoust, former head of the provincial government’s principal inward investment agency Invest Quebec, as his Minister of the Economy, Innovation and Exports.

Alcoa is not the only aluminum leader reinvesting in the province, as Montreal-based Rio Tinto Alcan in January inaugurated its US$1.1-billion Arvida Aluminum Smelter, AP60 Technology Centre, in Saguenay-Lac-St-Jean, where the company employs 135 people.

On the Lighter Side

Aluminum manufacturing is among the most energy-intensive industries on the planet. Both Rio Tinto Alcan and Alcoa are pursuing work in Québec that aims to get some of that energy back.

Alcoa has agreed to support the government’s electric transportation strategy by considering the Baie-Comeau facility as a potential source of aluminum for emerging technology applications, including aluminum-air batteries. Alcoa recently entered into a JV agreement with Israel-based clean technology company Phinergy to further develop its battery, which can be used in electric vehicles and runs on air and aluminum.