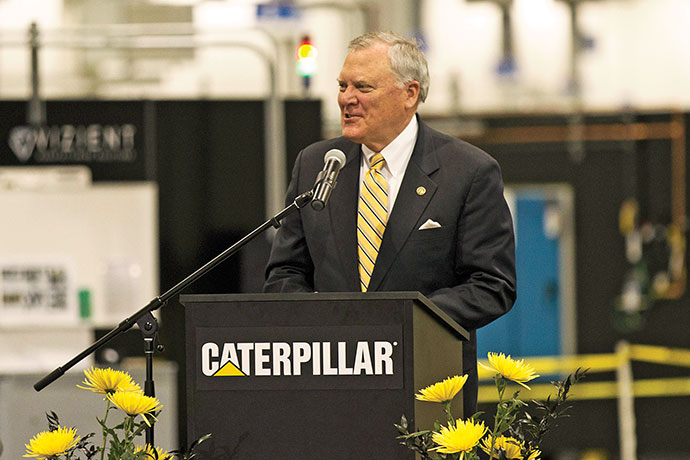 Governor Nathan Deal welcomes Caterpillar to Georgia, where it will employ about 1,400.
Photo by Robert Payne, Georgia Department of Economic Development
by MARK AREND
G 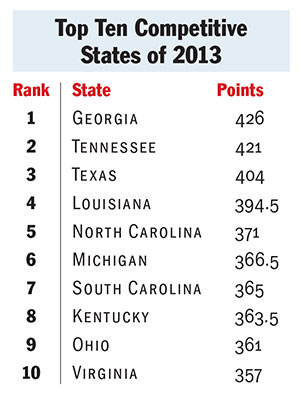 This year’s list of the Top 10 Competitive States has the Peach State comfortably ensconced in first place with 426 points — 12 more than the 414 that Texas earned to win first place last year. The Lone Star State actually dropped two spots to third place, making room for Tennessee to finish in second place with 421 points (see chart).

Most of the Top 10 states are southeastern, which is frequently the case with Site Selection’s rankings. But Rocky Mountain states – and even Midwest states, particularly Ohio — make increasingly frequent appearances on these lists.

The Top Competitive States ranking is based on an index of 10 criteria (see the methodology on page 86), most of which are tied to new projects and expansions tracked by Site Selection’s New Plant Database.

In November 2013, the magazine named Georgia the state with the Top Business Climate — a recognition that North Carolina or Texas have claimed for the past several years. And now, the Top Competitive State. Is this a pattern?

“When I took office in January 2011, I made a promise to the people of Georgia that we wouldn’t stop until our state was the No. 1 place in the nation to do business,” Gov. Nathan Deal tells Site Selection. “Not only are these rankings a testament to our dedication to improving the state’s business climate, but it also speaks to the commitment and support from our industry partners, communities and the citizens of Georgia.

“We have the resources, partnerships and tools needed to build a network for new and existing industries, international exports, entertainment productions, tourism opportunities and much more.”

Speaking of exports, Gov. Nathan Deal announced in February that Georgia has experienced a record increase in both exports and imports for the fourth consecutive year. According to the Census Bureau, the state moved up one position ranking in both exports and imports. Georgia increased from the 12th largest exporting state to the 11th in 2013. The state also increased from the 9th largest importing state to the country’s 8th largest importing state. More than 90 percent of Georgia’s total trade was with Asia, Europe and North America.

Meanwhile, it’s projects that boost state’s standings in Site Selection rankings, including Top Competitive States. The publication reported a total of 299 qualified Georgia projects for calendar years 2013 — the sixth most nationally. That’s up very slightly from 2012’s 296 projects, also a sixth place finish in this Governor’s Cup measure (see the March issue). By its measure, the state logged 389 expansions or location announcements for FY13 that generated 31,656 jobs and $6 billion in investment.

Can it maintain that momentum?

“Our economic development team is focused on attracting companies within key industries such as advanced manufacturing, agribusiness, health sciences, technology and international investment, because we already have a solid network of companies in these sectors,” says Gov. Deal. “When companies are looking to relocate or expand, they mainly consider the efficiency of a state’s logistics network, the quality of the workforce and the cost of doing business in the region. These key aspects have been the foundation from which our No. 1 business climate has been built.” 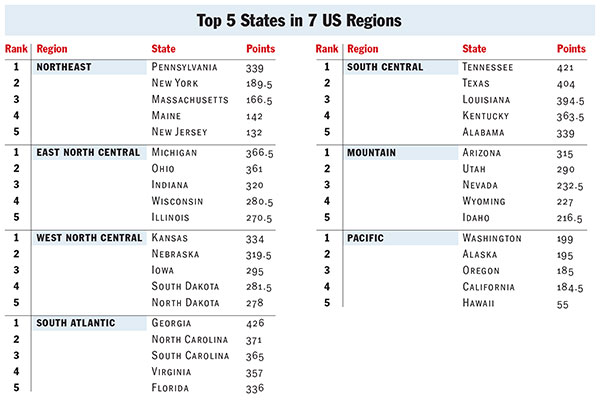 Be Ahead of the Curve

Governor Deal says his state’s competitiveness is the result of a combination of factors, not one or two attributes that set it apart.

“Remaining competitive — in fact staying ahead of the curve — is vital to economic development, and I can’t say enough about the importance of our partnerships with the communities in Georgia and internationally who help keep us competitive in the ever-changing economy,” he relates. “I believe the more we work together to bring in jobs and investment to Georgia, the more competitive our state becomes. We have heard from many companies in Georgia that one of the reasons they chose Georgia was because of the support from state and local-level economic developers.

In addition, our economic development community has heard repeatedly from the private sector that one of the greatest challenges facing businesses is the need for a consistent, trained and reliable workforce. Our progressive labor pool and top-ranked workforce development program, Quick Start, are usually the No. 1 reasons why companies decided to locate here.

Georgia’s transportation and logistics infrastructure is a clear competitive advantage and is often mentioned by capital investors as a chief reason the state made their short lists — and frequently topped those lists.

“Hartsfield-Jackson Atlanta International Airport and our interconnected highways and railways provide access to 80 percent of the US population within a two-day truck drive or two-hour flight,” Gov. Deal points out. “We have the fastest-growing port in the nation, the Port of Savannah, and the Georgia Ports Authority achieved its highest month on record in March 2014, moving 2.61 million tons of cargo through its ports.”

State competitiveness is a two-way street. The state needs to be competitive with other states in order to attract capital investment projects. But companies want to be competitive and successful, too, and states can help bring that about. Georgia appreciates this, says Gov. Deal. 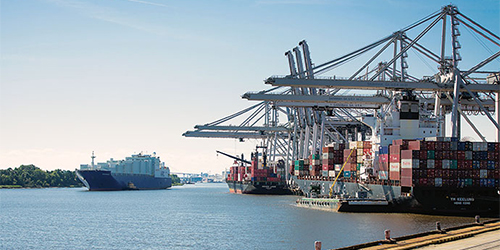 The Port of Savannah is one of Georgia’s critical infrastructure assets.
Photo by Chris Hamilton

“Our Global Commerce, International Trade and Centers of Innovation divisions provide customized business solutions for companies at every stage of growth and development through a team-based, industry-focused approach,” he illustrates. “From promoting our GRAD certified sites for company relocations or assisting a local company with an expansion, to providing international connections and access to the right R&D talent, companies come to us for assistance when they are seeking to grow their business locally or internationally.”

For small and mid-sized Georgia-based companies seeking to expand into global markets, the state’s international trade team provides introductions to and connections with opportunity markets all over the world.

“Innovative, high-growth companies are able to improve their products and expand their markets through our Centers of Innovation program. Lastly,” says Gov. Deal, “our combination of pro-business legislation, a steady stream of new workforce opportunities and long-term infrastructure growth — we’ll go everywhere and anywhere to bring jobs and investment opportunities to Georgia.”