he Volkswagen Group (VW) is building a new, $1.5-billion plant in Wrzesnia, Poland, to produce the VW Crafter, a popular delivery van. The expansion will create at least 2,300 new jobs. The 544-acre (220-hectare) plant includes a body shop, paint shop and final assembly unit and will begin producing vehicles in late 2016. Construction on the Wrzesnia plant will begin at the end of 2014. Since 2005, the Crafter has been produced at two 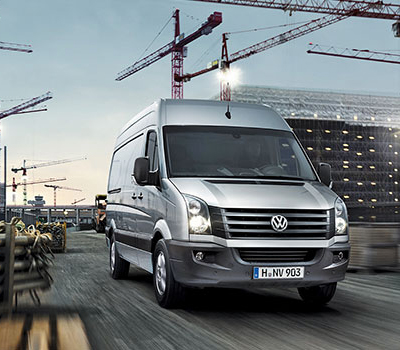 Daimler plants in Düsseldorf and Ludwigsfelde, Germany, thanks to an agreement between the companies set to expire at the end of 2016.

“With the decision to produce the Crafter in Poland, we have laid the foundations for the strategic reorientation of our light commercial vehicles,” said Dr. Leif Östling, member of the Board of Management responsible for commercial vehicles.

The Crafter delivery van will be produced in Poland by late 2016.
Photo courtesy of VW rench automobile manufacturer Renault will invest $223.5 million over the next five years to develop two new vehicles in its plant in Curitiba, Brazil. An additional $107.6 million will go toward creating a new distribution center to supply the company’s 275 outlets in Brazil and other markets. Renault has been manufacturing cars in Brazil for 15 years and has a market share of 6.7 percent, making it the fifth-largest carmaker in the country. The Renault Group has set a target to achieve an 8-percent market share in Brazil by 2016. The African Development Bank supports infrastructure projects such as increasing capacity of the Tangier-Marrakech railway axis in Morocco.
A

frica is acknowledged as the next major emerging economic market, and the African Development Bank (AfDB) is in the process of helping countries and communities build the infrastructure to support economic development. From Nigeria to Gambia to Swaziland, the AfDB has announced funding for diverse projects across the continent that will create jobs and, ultimately, opportunity for even more growth.

According to Amadou Sy, senior fellow, Global Economy and Development, Africa Growth Initiative, at the Brookings Institution, private capital invested in Africa has increased from $14 billion in 2002 to $67 billion in 2012. That level of investment shows no sign of decreasing. China is driving much of the foreign investment along with the rest of the BRICS (Brazil, Russia, India, China and South Africa). “These countries now account for more than one-quarter of capital investment to the continent, and this trend is moving upwards,” said Sy.

Have Suitcase, Will Travel

olorado-based Samsonite is investing $11 million in the company’s plant in Szekszard, located in southwest Hungary. In addition to adding a new product line, the expansion will add 47,361 sq. ft. (4,400 sq. m.) of new manufacturing space to increase output up to 800 polycarbonate suitcases per day. Production is expected to launch in early summer. The Szekszard expansion is part of a larger, ongoing investment plan in Hungary launched by Samsonite in 2009. General Motors will invest $12 billion in manufacturing plants in China over the next three years.
G

eneral Motors (GM) plans to invest $12 billion in China over the next three years, expanding the company’s manufacturing capacity there by 65 percent by 2020. GM will build five more plants in China in 2015. The Michigan-based automobile manufacturer expects its sales in China will expand between 8 and 10 percent in 2014.

aryland-based Lockheed Martin, in partnership with EMC Corp., officially opened a new Information Systems and Global Services (IS&GS) office in Be’er Sheva, in the Negev region of Israel. The new office serves as an anchor for development of a national cybersecurity hub in the southern part of the country. The project also supports Israel’s “Move South” initiative, an attempt to develop the Negev, which constitutes 60 percent of the country’s landmass but is home to only 8 percent of the population.

Israel’s first C-130J Super Hercules was welcomed by dignitaries and operators at an official ceremony in Israel, on April 9, 2014. The Israeli Air Force bestowed the nickname “Shimshon,” meaning sun, on its C-130Js.
Photo courtesy of Lockheed Martin

In late 2014, the Israeli Defense Forces (IDF) will move 10,000 troops to a new base being built just south of Be’er Sheva. “The consolidation of IDF Technical Units to new bases in the Negev Desert region is an important transformation of Israel’s information technology capability,” said Marillyn Hewson, chairman, president and CEO of Lockheed Martin. “By locating our new office in the capital of the Negev, we are well positioned to work closely with our Israeli partners and stand ready to accelerate project execution, reduce program risk and share our technical expertise by training and developing in-country talent.”