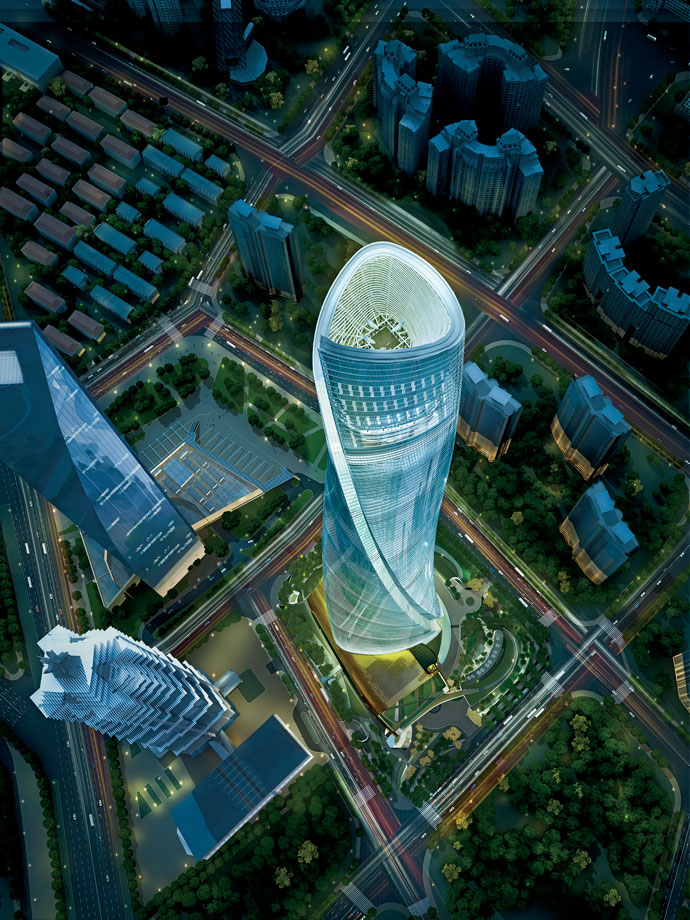 Image courtesy of Gensler
by ROSS A. LARSON
& HERMINIO ANDRES

ver the past 30 years, Mainland China has become the manufacturing hub of the world. But even markets with that significant a distinction need to recalibrate now and then. In 2014, China is facing rising input costs, decreasing foreign direct investment and slower economic growth. As companies look for lower business costs, many find them in other Asian markets, and some are "re-shoring" to North America or the European Union. In response, China has put its full faith in reform by revamping its labor-force policy, driving growth through infrastructure and e-commerce investment, implementing groundbreaking political reforms, and adjusting economic policies. Early indications point to positive results.

Recognizing the critical importance of labor, China has begun to reform the hukou registration system in a way that will give migrant laborers similar rights to urban workers, and which will help facilitate free movement of labor in the Mainland. With millions of people migrating from rural areas to cities each week, China is expected to be 70 percent urbanized by 2030.

Other workforce developments are under way. With China's economic transition from a manufacturing center to a consumption-driven economy, the current labor force generation is pivoting from low skills to greater sophistication. Whereas factories once relied on low labor costs, they now face an annual 15-percent rise in minimum wage, driven by the government's desire to create consumers and drive domestic consumption. Low-wage manufacturing of cheap goods for export has transitioned into the production of value-added goods and services as workers and firms accumulate skills and experience through decades of technology transfer.

The blooming e-commerce industry, along with the rise of the middle class, is an important driving force in China's domestic economy. The Alibaba Group dominates the online market with an 81-percent share of online retail sales; total online retail sales in China totaled $305 billion in 2013. E-commerce is quickly becoming the new engine in economic growth for China, driven by new technology and logistics investment. Chinese rival JD and the US's Amazon.com are following Alibaba's lead and continue to expand across Mainland China. Other major domestic players continue to grow, such as Global Logistics Properties, averaging three new buildings per week in China on top of their 526 completed buildings.

Infrastructure investment continues to be an important economic driver as connected cities spring up across the Mainland. Since 1992, China has on average invested 8.5 percent of its annual GDP into infrastructure. Under the current five-year plan (2011-2015) China plans to pour 7 trillion RMB (US$1.1 trillion) into infrastructure, with an additional 3 trillion RMB into the national rail network. The focus on infrastructure investments by Beijing sets China apart from other emerging markets, as other countries continue to struggle to efficiently connect their cities. Compared to China's 85 percent of roads paved, top competitors Brazil and India's roads are only 15 percent and 54 percent paved, respectively. These two economies and other younger markets are currently unable to support the burgeoning industries that China continues to nurture. 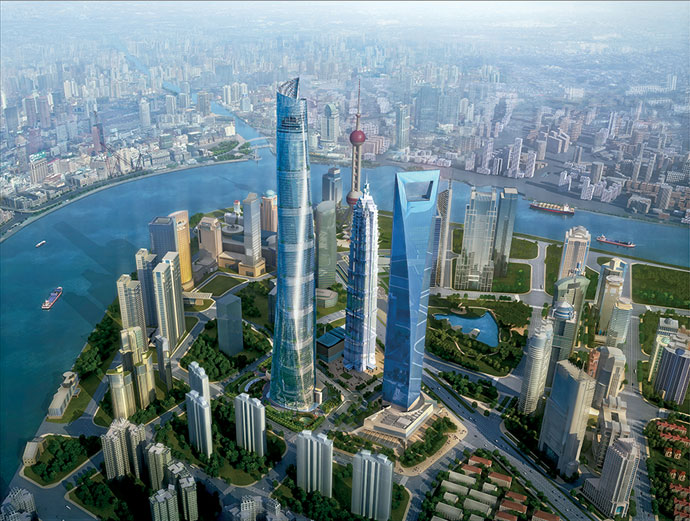 Begun in 2008, Shanghai Tower (above and previous page) is the second tallest building in the world, and is expected to be complete in 2015.
Renderings courtesy of Gensler

In November 2012, China celebrated the 18th Communist Party committee meeting with the First Plenum, where Party Leader Xi Jinping called for all party members to instill in themselves a greater sense of self-discipline. The following two years led to an extensive effort to root out ill-gotten gains, a broad assault on corruption led by Xi's right-hand man, Wang Qishan. Since the anti-graft campaign, three-dozen officials with the rank of vice minister or higher have been detained on allegations of corruption. In 2013, approximately 182,000 party members were investigated, up from roughly 20,000 the year before.

Recently, these investigations have begun to affect consumer spending, which is falling in the case of luxury goods - to curb the appearance of wealth, in accordance with the government's anti-graft campaign. In the short run, consumer spending on luxury goods may be down, but looking ahead, China's crackdown on graft will begin to produce long-term economic gain, as government funds are spent more productively, thus reducing transaction costs of conducting business in China.

The Shanghai Pilot Free Trade Zone (SPFTZ), officially launched in September 2013, has brought with it a number of financial market reforms. The most encouraging reform allows the market to determine resource allocation, a substantial retreat of micro-management from party officials. Within the SPFTZ the government has loosened restrictions on moving goods, and reduced regulations have made it easier to establish wholly foreign-owned enterprises (WFOEs). As of September 2014, over 10,000 newly formed enterprises were established in the SPFTZ, including almost 700 WFOEs. Despite these successes, some analysts still see the reform progress as modest. Many hoped for more substantial breakthroughs, but political bumps and a long "negative list" of 139 off-limit industries have slowed progress.

Additionally, many municipalities' recent rezoning efforts from industrial zones to commercial and/or residential zones have resulted in some investors being caught off guard. Industrial companies established in these formerly industrial-zoned areas are now being required to relocate as zoning requirements change. This factor alone shows how important future site selection is in China as the country continues to evolve.

Historically, China has tightly controlled its currency, resulting in a favorable environment for exports. Recently, the central government has begun to loosen its hold on the RMB, allowing for a 2-percent change per day up from the previous 1-percent fluctuation rate. Though this change is small, it represents a significant step forward. Many praise the reforms and continue to look forward as the Yuan begins to dominate the global market, challenging the US dollar as the benchmark global currency.

China's Shanghai Stock Exchange (SSE) has been on the rise, up 16 percent year to date, and financial analysts are increasingly providing coverage for Shanghai-listed stocks. Shanghai also has secured approvals from Beijing to set up international trading floors in the SPFTZ. On September 18th, the SPFTZ launched the international gold exchange to help better value the country's assets. The Shanghai-Hong Kong Stock Connect pilot program is another example of China's push toward financial market reform and a huge step toward internationalizing the SSE. Although the government has capped the program to avoid market disruptions, the program will allow foreign investors to buy Yuan-dominated stocks directly on the SSE. Previously, foreign investors could only get exposure to Chinese securities through exchange-traded funds in Hong Kong. This reform is creating the second-largest equity market in the world in terms of market value and a much more efficient way to value Chinese companies.

With these economic reforms, China has begun leveling the playing field for foreign investors and private companies.

After cramming 350 years of economic development into just 35, China is positioning itself as a leading player in the world economy. China continues to encourage market-based growth, and is on track to become the world's largest economy measured by nominal GDP, a goal some analysts say will arrive in 2024. According to the IMF, China already is the largest economy in terms of purchasing power parity. China will continue to grow as its newly recalibrated labor and regulatory landscapes bear fruit, thus bringing new and evolving opportunities for foreign investors.