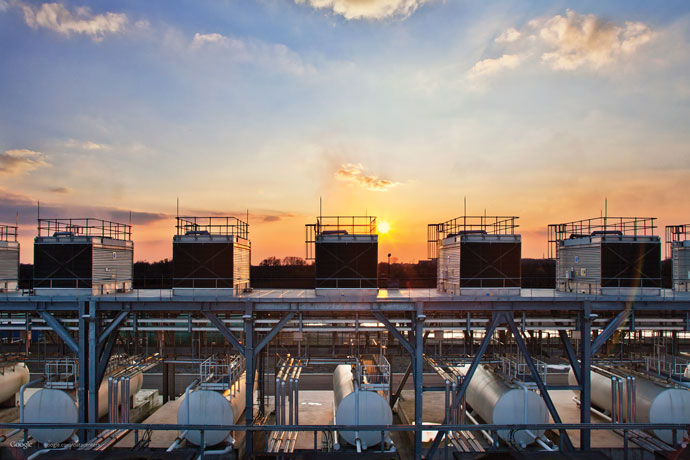 he following is a summary of the Q2 2014 European data center sector from Andrew Jay and Darren Mansfield, leaders of the Data Center Solutions practice for Europe, the Middle East, Africa and the Asia Pacific at CBRE Ltd. in London. "In terms of corporate investment projects we are not seeing major end users taking on self-build projects at present," the authors tell Site Selection. "Generally colocation is the preferred method for end user data center needs. Examples of large organizations building their own data centers are confined to global IT infrastructure companies who are wishing to offer an onward service, such as Microsoft or Amazon in Dublin, Google in St. Ghislain [Belgium] and Hamina [Finland], and Facebook in Lulea [Sweden]."

Following several years of unsettled business and general market conditions, 2014 currently appears to be marking a turning point in European data centers. A combination of stable letting activity in the second quarter and an exceptionally strong Q1 has resulted in colocation take-up for H1 reaching unprecedented levels in the major markets. An indication of a sustained demand has also meant that data center operators have become more confident in their expansionary investment decisions. The second quarter has shown that the introduction of new supply has risen by around 30 percent when compared with 2013 as operators rally to ensure their product is available to take advantage of an improving market.

Taking a closer look how these market conditions are changing, CBRE's records show that, in terms of supply, a sharp uplift in the introduction of new data center capacity was recorded in the first quarter of 2014 followed by a smaller uplift in Q2. Total supply at the halfway point of 2014 amounted to 754 megawatts (MW), of which 142 MW was available for customer purchase. A review of availability recorded in recent years suggests that despite the reduction in Q2, overall the current level remains high, and it is CBRE's opinion that surplus capacity could sustain pressure on pricing in some areas.

The year-to-date total has now reached 38 MW, a historic high for the H1 period, and a total that serves to substantiate the noticeable improvement in customer demand for this year.

Driving the higher level of vacancy is an increase in the rate at which new capacity is released to the European market. As of the end of Q2, 44 MW had been added to European supply in 2014 compared with a total for the year of 51 MW in 2013. Increase in operator build activity is for the most part being led by stronger customer demand, which will provide a counter balance to maintain market equilibrium.

Looking ahead, the development schedule over the coming 12 months indicates the completion of some significant schemes across the major markets.

London currently has the highest level of vacancy in Europe. Total availability recorded at the end of the second quarter had increased to 75 MW of customer power, a historic high. The significant wholesale presence in the city somewhat distorts this figure, making comparison difficult. However, analysis of retail facilities in isolation indicates that, although London still has the highest amount of available customer power, this remains proportionate to annual levels of take-up.

The markets of Frankfurt and Amsterdam continue to attract particular focus from operator investment programs in 2014. Both of these cities are currently experiencing particularly strong customer demand, and this is encouraging a sustained series of new build-out programs.

In the first six months of this year an additional 8.6 MW of new capacity has been released in Amsterdam, the majority coming with the opening of the final phase of Telecity's AMS 5 facility. In Frankfurt a further 11.5 MW has been added with the acceleration of Interxion's FRA8 contributing to this rise. Due to an increased level of customer orders, however, availability in both cities remains consistent with 12 months ago.

Looking ahead, the development schedule over the coming 12 months indicates the completion of some significant schemes across the major markets. The rise in total capacity is likely to be close to 75 MW.

Included in that is the first phase of the Equinix LD6 facility in Slough, UK, with a capacity of 1,385 cabinets, which is due to open in the first half of 2015, and the new 11-MW LONDON2 facility from Virtus in Hayes in West London, which tallied five customers before it officially opened on September 30. (A LONDON3 project is in the works.) In Frankfurt the 4,400-sq.-m. (47,363-sq.-ft.) second building of the e-shelter Frankfurt 3 campus is scheduled for Q1 2015 and Interxion expect the final two phases of their FRA8 facility in the first half of 2015. 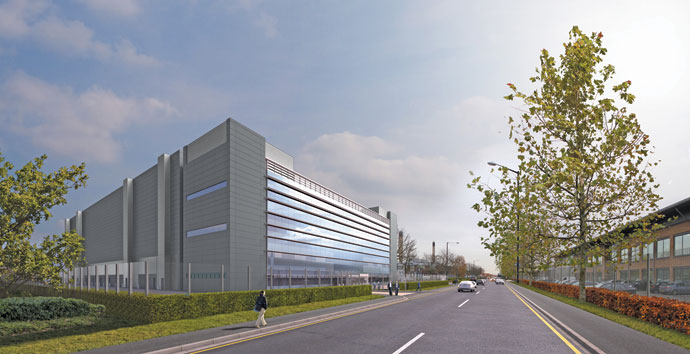 The first phase of the Equinix LD6 facility in Slough, UK, with a capacity of 1,385 cabinets, is due to open in the first half of 2015.
Rendering courtesy of Equinix

Of course, all supply decisions will be led by expectations of demand to match. Across the major markets the CBRE records show that an exceptionally strong beginning to the year followed by steady letting activity in Q2 has meant that at the mid-year point the total amount of transacted power has surpassed the highest recorded half-year total. Take-up in the second quarter amounted to 10.8 MW, on par with the five-year average for this period. However the year-to-date total has now reached 38 MW, a historic high for the H1 period, and a total that serves to substantiate the noticeable improvement in customer demand for this year.

Customer retention levels remain exceptionally high for data center operators due to the extreme complexity, cost and risk associated with moving IT infrastructure.

Continuing to drive demand across the major markets in Europe are connectivity-led requirements from content, telecoms and cloud providers. Cloud providers in particular have been especially active, securing data center capacity aimed at servicing expectant growth in demand from end-user groups. Interxion noted in their Q2 earnings presentation that cloud platform providers currently make up approximately 25 percent of their business. This provides an example of the growing relationship between cloud and colocation businesses.

Given the importance placed on connectivity, it is of little coincidence that the markets of Amsterdam and Frankfurt are experiencing the strongest levels of demand. Frankfurt currently has recorded the highest amount of take-up of any of the major markets. A total of 13.2 MW has been transacted so far this year, which is just short of the 14.7 MW of contracts awarded in 2013. In Amsterdam take-up now exceeds that achieved in the full year of 2013. At the halfway point 11.7 MW has been sold, the highest total on record for an H1 period.

Andrew Jay is head of Data Centres and Darren Mansfield is an analyst within the Data Centre Solutions Group at CBRE in London. CBRE formed a Data Center team in 1994 to address the specialized technical real estate needs of high-tech firms such as telecommunications companies, data center operators and corporate end users. For more visit www.cbre.com.

Take-up in Europe's largest market, London, currently lags behind both Amsterdam and Frankfurt. A total of 8.6 MW has been transacted so far this year, which compares to the 8.3 MW in H1 2013. However, a considerable amount of latent demand has built up in London, which is currently generating a rise in the number of new requirements coming to market in 2014. It is CBRE's opinion that the latter half of this year will see many of these completed, resulting in improvement to take-up.

The topic of churn is likely to have influence on new business for all operators moving forward. Customer retention levels remain exceptionally high for data center operators due to the extreme complexity, cost and risk associated with moving IT infrastructure.

However, upcoming lease events in some cases will involve a customer desire to reduce their IT footprint and benefit from the gap between renewal rates and current market rates. In instances where location flexibility is present, this may encourage some customer movement, which should present an additional source of opportunity for operators to win new customers.