Why volume is migrating to East Coast seaports. 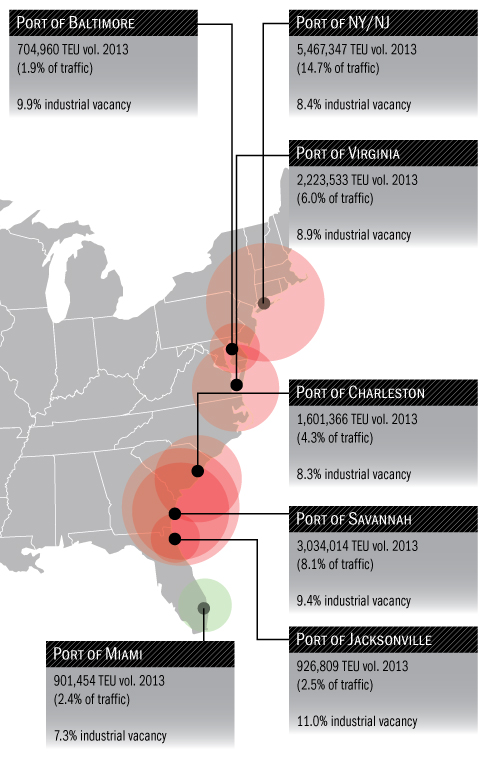 Port diversification strategies, access to market and booming industrial activity are behind an increase in East Coast port activity, according to recent analysis from JLL’s 2014 Seaport Outlook. The study tracks 13 US seaports — seven on the East Coast, five on the West Coast and the Port of Houston on the Gulf Coast. Activity on the West Coast remains strong, but volume at those ports is 6.8 percent lower than peak levels in 2007. Conversely, East Coast port volume is 19.1 percent higher than in 2007.

What else is behind the gradual but demonstrable gains in East Coast TEU volume increases? 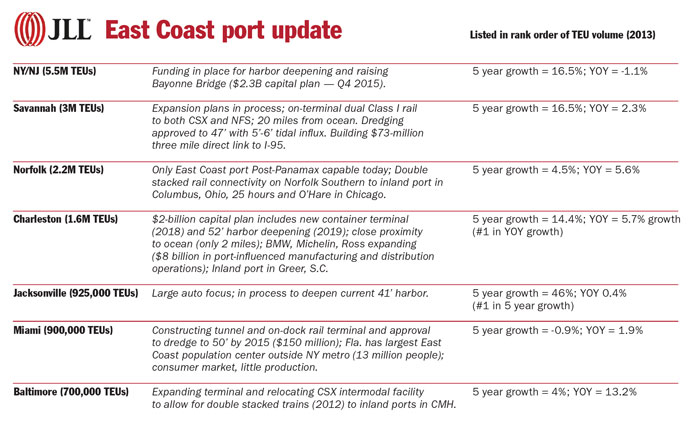 “While Los Angeles/Long Beach still remains one of the most efficient and effective ports of entry for goods from Asia entering the US, we are seeing a shift in traffic to East Coast ports, which we believe has been a risk mitigation strategy related, in part, to the threat of potential disruptions, such as a port labor strike on the West Coast,” says Dain Fedora, research manager, industrial, at JLL. “Port diversification strategies are becoming more prevalent — don’t import all your eggs into one basket.”

Besides which, says Fedora, “The most important thing to keep in mind is that two-thirds of the US population lives on the East Coast. Freight ultimately must get to the end consumer. Many eyes are on the Southeast as it has lagged other industrial real estate markets in its recovery. However, Atlanta for example had a first quarter reminiscent of pre-recessionary levels, and large blocks of existing distribution space are dwindling. The Port of Savannah, currently the nation’s fourth-busiest cargo seaport, largely influences Atlanta’s industrial corridor. More imports means more demand for distribution space, and the Atlanta industrial market is heating up.”

The Southeast is also a growing US manufacturing region, notes Fedora, creating import/export demand on East Coast ports. And heightened production is benefiting the nation’s export figures. “A notable example can be traced to BMW, which exports 250,000 cars through the Port of Charleston each year,” he illustrates. “Charleston offers on-dock rail connectivity, and the new inland port in Greer, S.C., with direct linkage to Charleston is helping prompt industrial development in that region.”

All Southeastern states have right-to-work laws, making it difficult for unions to form, Fedora points out. “When combined with incentives, which vary at the site level — the Southeast is positioned to compete with historic manufacturing strongholds such as the Midwest and Northeast. By-the-numbers, the Southeast has built 20.5 million square feet of new manufacturing space from 2009 through mid-2014. The Midwest, in comparison, added 16.2 million square feet over the same timeline.”