But some states appear to do FDI better than others. 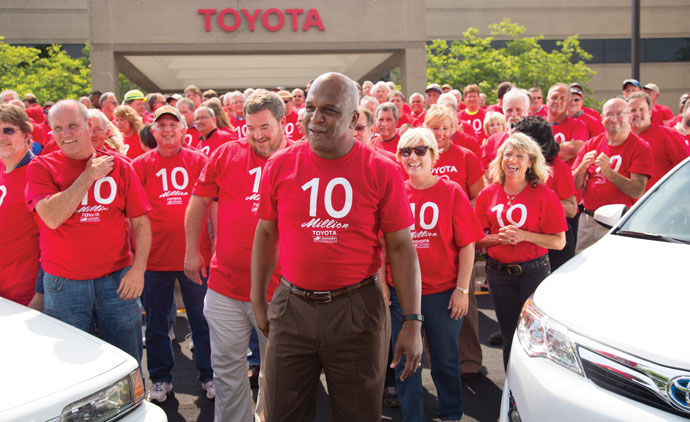 Toyota in 2013 announced major investments in Indiana and Kentucky, where TMMK President Wil James and team members in May 2014 celebrated the production of the Georgetown plant’s 10 millionth vehicle.
Photo courtesy of Toyota
by ADAM BRUNS
F

oreign direct investment is a quarry everyone wants to mine. From the highest levels of federal government to missions abroad and welcome parties at home orchestrated by cities and states, FDI is a major cog in any area’s economic development strategy.

Every fall, we ask states to update us on their FDI-related activity. The following summaries are derived from received responses and Site Selection research.

The state welcomed 23 projects in 2013 announced by foreign companies, totaling $338.3 million in investment and expected to create 2,215 jobs. Leading countries of origin were the UK (6), Canada (5), and Germany (4). The largest project as measured by capital investment was made by Ehrmann Commonwealth Dairy (Germany), with over $53 million invested in Casa Grande, creating 110 jobs. The largest project as measured by new jobs created was made by Union Bank (Japan), with 250 new jobs created and over $40 million in new capital investment.

Gov. Jan Brewer led a trade mission to India in 2013, after trips to Germany, France and Canada in 2012. A new Arizona trade office officially opened Oct. 7, 2014, in Mexico City. In 2013, $14 billion of trade took place between Arizona and Mexico.

California ranks first in the nation for foreign direct investment, according to the Congressional Research Service, which reported that the state’s foreign affiliates also employ more people (590,000 in 2011) than any other state. Among other projects, China Zhongwang Holdings Ltd. is investing $1.5 billion in a new plant for extruded aluminum products in Barstow.

Gov. Nathan Deal led a number of trade and investment missions in 2013 to countries including China, Japan, Israel and Belgium. The Georgia Dept. of Economic Development (GDEcD) celebrated the 40th anniversary of its Tokyo office, and has had an office in Seoul for 30 years. It also has international representatives in 11 global markets. The state is home to 42 bi-national chambers of commerce actively involved in Georgia’s international business community.

GDEcD worked on 75 FDI projects in FY 2014, up 27 percent over the previous year, and representing 20 percent of all new locations in the state. The 75 projects represented 5,964 jobs and $2 billion in investment. Leading nations of origin were Japan, Korea, Germany, Israel and India. The biggest FDI project in 2013 was Toyo Tire’s $370-million expansion in Bartow County, which created 650 new jobs.

Idaho officials say the state was represented at a number of global industry expos and on international trade missions in 2013, as economic development officials actively work to refine FDI strategy. The year included a November trade mission to Russia led by Gov. C.L. “Butch” Otter. The state welcomed two FDI projects in 2013 totaling more than $38 million in investment and creating more than 100 jobs, led by Portugal-based Frulact Group’s fruit processing plant in Rupert.

The Indiana Economic Development Corp. places special focus on the markets where Indiana has offices: Japan, Germany, and Greater China. In 2013, a direct flight from Indianapolis to San Francisco was added in order to better serve Asian companies doing business in Indiana. Gov. Mike Pence conducted an economic development trip to Japan in 2013, which has been followed in 2014 by visits to Germany and the UK.

Indiana had 35 FDI-supported projects in 2013, accompanied by more than $515 million in investment and creating 1,976 jobs. Japan and Germany were the leading countries of origin in foreign direct investment, and the biggest project of the year was centralization of worldwide production of the Highlander at Toyota Motor Manufacturing’s site in Princeton.

Gov. Sam Brownback kicked off the Kansas Edge Reshoring Initiative, focused on bringing both foreign and US firms’ manufacturing to the US. The state attracted five FDI projects in 2013, creating 945 jobs with $167.5 million in capital investment. The Netherlands, the UK and Switzerland were the leading countries of origin. Unilever’s $152-million investment in Gardner had the biggest FDI impact in 2013.

Fifty-four FDI-supported projects were announced in Kentucky during 2013, worth $1.26 billion and creating more than 4,600 new jobs. In 2013, FDI accounted for nearly 40 percent of new investment and close to 30 percent of new jobs created in Kentucky, where FDI in the past five years has amounted to $3.9 billion. More than 430 foreign-owned companies from 31 nations employ more than 85,000 people in the Commonwealth.

Gov. Steve Beshear led trips to Germany, Austria and Spain last year, and has traveled to Germany and the UK this year, while economic development leaders made FDI trips to Japan, Belgium and Germany. After Beshear made a trip to Japan, Toyota announced in 2013 it would invest $531 million to expand its Georgetown plant and produce the Lexus ES350 there, creating 750 new jobs. Kentucky’s leading countries in FDI-supported project announcements during 2013 were Japan (20); Germany (12); UK (4); Canada (4); and France (4).

Kentucky has launched an apprentice method of training based on the German Skills Initiative, and is working with Germany on a dual certification of training.

Louisiana Economic Development last year established a network of representatives across nine strategic markets: Germany, Austria, Switzerland, Japan, China, India, Mexico, South Korea and the UK. Gov. Bobby Jindal in Jan. 2014 undertook a trade mission to Asia, which was followed by an LED trade mission to China this summer. The latter culminated with the July 2014 announcement of Yuhuang Chemical’s $1.85-billion investment in a methanol production facility in St. James Parish. Canadian firm Methanex’s own methanol investment in Geismar was the biggest FDI project of the year, with two plant relocations from Chile meaning $1.1 billion in investment and 165 new jobs.

In 2013, Mississippi welcomed five FDI projects totaling $535 million in investment and 1,890 new jobs. They were led by three from Japan, including a $300-million, 500-job investment from Yokohama Tire Corp.

The state welcomed 12 FDI projects in 2013 worth more than $3.2 billion and 610 new jobs. Leading countries of origin were Japan and China. The Nebraska Department of Economic Development opened a new office in China, and participated in a Lieutenant Governor-led mission to China and Japan.

The Garden State welcomed 14 FDI projects in 2013 worth $68 million and 1,500 new jobs. The mix was diverse: Canada, Germany and France produced two projects each, and eight other countries had one project each. Among the investors was BioTrial, a clinical research organization (CRO) from France that selected Newark over sites in New York and Boston to build its new North American headquarters.

According to Empire State Development, the state welcomed 16 FDI projects in 2013 that will create 2,218 jobs with total capital investment of more than $2.5 billion. Leading the pack are Abu Dhabi-based GlobalFoundries’ continued investment in Malta ($2 billion), German firm Muller Quaker Dairy’s $250-million investment in yogurt manufacturing in Batavia, and Dubai-based Alita USA Holdings’ 172-job investment in steel pipe manufacturing in Buffalo. Four of the 16 projects hailed from Germany, with three coming from Canada.

North Carolina welcomed 70 FDI projects in 2013 that will create 5,866 jobs through nearly $1.5 billion in investment. Germany led the way in terms of job creation, while Japan and Canada led in capex, investing $275.7 million and $267.4 million respectively. Canada’s Gildan Yarns is investing more than $250 million and creating 500 jobs in three different counties. Sweden’s Electrolux is creating 810 jobs and investing $85 million in Charlotte.

The state continues to support investment offices in Frankfurt, Shanghai, Tokyo and Toronto, and last year conducted recruitment trips to Germany, Japan, the UK and China. In addition to participating in key international trade shows, through its public and private universities the state is conducting a number of trips to improve international relationships.

The state welcomed 18 FDI projects in 2013 that are expected to create 1,609 jobs with accompanying investment of $330 million. Leading countries of origin were the UK and Canada. Two expansions by ABB alone will create 425 jobs.

The Oklahoma Dept. of Commerce maintains overseas offices in Mexico City, Shanghai and Tel Aviv. In addition to having several areas conducive to EB-5 investment, the state has conducted trade missions to the Farnborough Air Show 2014 and the Tube Show in Germany.

With a four-decade history of international offices, the state regularly participates in major trade shows such as Farnborough, and the International Auto Show in Frankfurt, and organizes trade missions. This November, Gov. Nikki Haley will lead a delegation to India.

Fifty-three FDI projects creating 9,310 new jobs with more than $1.7 billion in capital investment landed in Tennessee in 2013. Japan’s 20 projects (the same total as in Kentucky) led the way by far, followed by Germany (8), Canada (7) and the UK (6). The biggest impact came from South Korea’s Hankook Tire Co., which is investing $800 million and hiring 1,800 at its first US manufacturing facility, in Clarksville.

Gov. Bill Haslam has taken two trips abroad to Europe and Asia with the Tennessee Dept. of Economic and Community Development (TNECD), whose staff have also visited Japan, China, the UK, Canada, Italy and Germany, and have increased international marketing.

The state has limited data for 2013, but says the total investment value of FDI over the 24 months ended in September was more than $652 million, expected to create more than 2,000 jobs. Of the 15 projects attracted during those two years, 11 arrived in 2013. China, England and Sweden were the leading countries of origin. The biggest project was a 300-job office from Orient Overseas Container Line (OOCL) landing in Salt Lake City.

The Washington State Department of Commerce supported 25 major FDI projects in 2013, creating 2,468 new jobs with $3.1 billion invested. France, Japan, China and Canada led the way as countries of origin. The biggest impact came from the July 2013 announcement from Netherlands-based Booking.com, which is hiring up to 350 at a new customer service center in Bellevue.

The state is aggressively connecting with China, and is also promoting its 13 EB-5 regional centers. Commerce is developing partnerships with financial services and law firms to support companies looking for partners or M&A/JV targets, and recently contracted with an Indian consulting firm that will help promote the state in India. Commerce also has contracts with partners in China and Europe and works with smaller offices in Japan and Taiwan on an ad-hoc basis.

Out of a handful of FDI projects in 2013, the one with the biggest impact in Wyoming was a $100-million, 60-job investment from Canada’s UR Energy in a uranium conversion plant in Lost Creek in the south-central part of the state.