Twenty-five years later, Germans remember when the Berlin Wall fell, reflect on how far a unified Germany has come, and ponder how far it has yet to go. 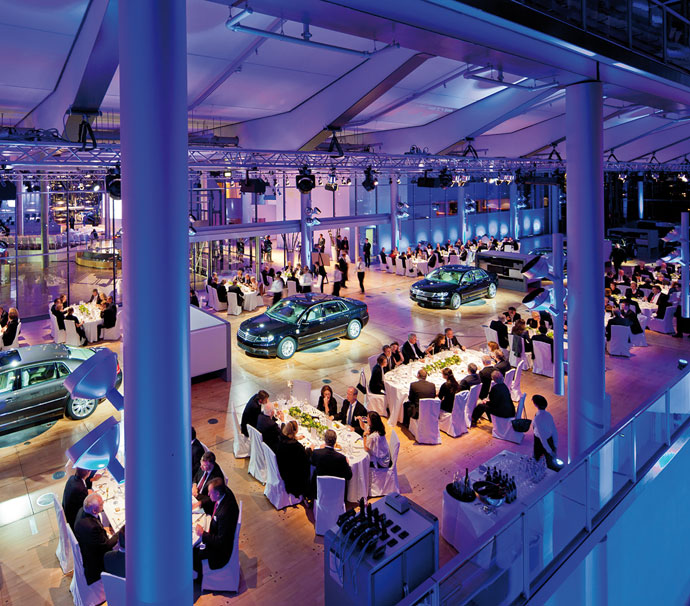 Since 2001, Volkswagen’s Transparent “Manufactory” along the Elbe River in the center of Dresden in Saxony has been the production site for the Phaeton luxury class model. VW says the location choice in a region known for craftsmanship was “simultaneously a sign of its commitment to Dresden and Saxony and, in many ways, a plus for both the city and its people.”
Photo courtesy of Volkswagen
by ADAM BRUNS
A

sk East Germans where they were when the Berlin Wall came down in November 1989 after 28 years of separating a nation, and each of them will have a story to tell. It likely won't be told with cool objectivity.

"There I was, a 38-year-old man, with tears streaming down," says one resident of Halle, in Saxony-Anhalt, whose family was divided by the border for so many years.

Oliver Köhn, today the senior manager and head of international business development for Investment and Marketing Corporation Saxony-Anhalt (IMG), was a young soldier in the East German military in 1989, and had been on extended duty along with his countrymen for weeks as tensions mounted. He and his fellow soldiers heard things that night on a tiny short-wave radio, but they needed confirmation. 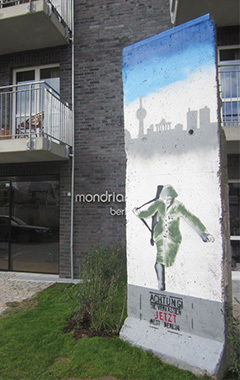 The boutique Mondrian Hotel near Checkpoint Charlie in Berlin is one of many places in the world in proud possession of a piece of the Berlin Wall.
Photo by Adam Bruns

Site Selection Senior Editor Patty Rasmussen lived in West Berlin with her family from 1964 to 1966, when her father, a US Army captain, was assigned to the Berlin Brigade. She recalls life there then, and reflects on life there now.

Often on Sundays after Mass, my dad would drive us to the Brandenburg Gate. He'd say, "Here we have freedom," then he'd point past the checkpoints and continue, "Over there, they have no freedom." I was five or six years old, and I still remember it. We'd drive past areas where we could see the Wall. We knew people died trying to get out of East Berlin. My parents even took us to see Spandau Prison where Albert Speer was still imprisoned. We have a picture of my brother - probably two or three at the time - shaking hands with a Soviet soldier.

I have a sister who was born while we lived in Berlin. She is very proud of that. One year for her birthday, a friend gave her a piece of the Wall. I know it's a treasured possession.

It's funny to think back now and realize that there is at least one generation strolling around Berlin that has no recollection of a city with two economic and political systems, a people divided by a wall. I honestly never thought I'd see the day when Berlin was reunited. I'm so glad I was wrong.

"There was a seal on the television," he says, limiting their viewing options to two stations from the German Democratic Republic, aka East Germany. So they broke it. Soon enough they saw the breaking news, as the Wall came tumbling down.

"It was very stressful," he says. On the one hand was joy at seeing a decades-old division disappear before their eyes. On the other hand: Might he and his fellow soldiers be called upon to take up arms against their own people as they streamed across the line?

In the end — in part because it was the middle of the night — the best decision turned out to be no decision. No intervention was made, and the fearsome border was suddenly a thing of the past.

Just as suddenly, so were the longstanding Soviet-driven business arrangements and markets of East German companies, driving many to close. A region known for its vibrant chemicals and metals sector had to start over. Rules still needed to be worked out about property ownership and regulation and registration of private companies. Smashing apart the Wall had removed a police-state existence for many people. But it also swiped away the crutches of East Germany's economy.

Those props were immediately replaced with EU subsidies, which some would say have vastly overstayed their welcome, even as they gradually diminish. But Germans describing those euphoric days in 1989 knew they were watching a historic moment unfold.

"There was a lot of excitement for me personally because part of my family was living in the West and part was in the East," says Thomas Glatte, director of Group Real Estate & Facility Management for BASF, who grew up in East Germany. "It was not only unification of the country, but unification of the family, so it was something to really celebrate. It was also exciting on a personal level to see a revolution happening peacefully, and to see a dictatorship collapsing. We feared the system, but seeing it collapse and go away that quickly was an astonishing experience."

Over his 20 years with BASF, Glatte has spent a lot of time in China and in Hong Kong. He says seeing the people protesting peacefully in the streets there today "brings back a lot of memories for me."

As for the professional and economic development side, Glatte and others have mixed feelings, "because the reunification brought about the immediate collapse of the industrial base of Eastern Germany," he says. "Inefficient industrial production was immediately absorbed by the big brother in the West, which had enough industrial capacity to deliver the needs we had in the East. Because the unification happened so quickly, with no adaptation period, at least in the early years, it really caused a lot of unemployment."

Glatte earned a degree in civil engineering in 1995, but it came just as a five-year boom in post-Wall construction activity was coming to an end. It thrust Glatte into a position he didn't really want: taking a project engineer job in Thailand, which at that time was in nobody's top 10 countries to live the expat life. He departed with two pieces of luggage, waving an unhappy and frustrated goodbye to his friends and family at the airport. "The decision to go to Thailand for good, not knowing I would have a job two years later back in Germany, and to leave family and friends behind, was the most difficult decision of my life. I was screaming. Twenty people were standing there looking at me, and couldn't believe I was going to do it." 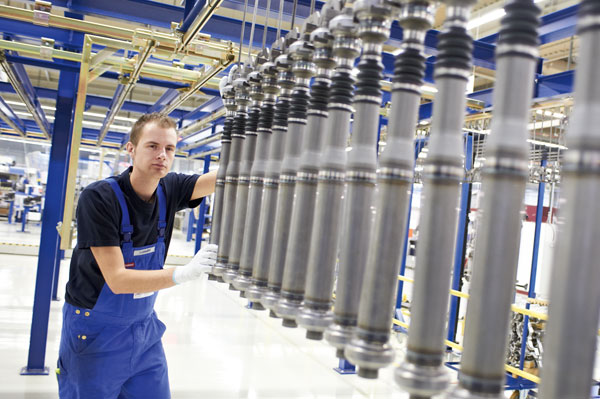 Former East German company IFA Rotorion, the largest company in the automotive sector in Saxony-Anhalt, was privatized in 1992 and has drive shaft and joint production facilities in Haldensleben and Irxleben; Charleston, S.C.; and, as of this fall, Shanghai.
Photo Courtesy IFA Rotorion

But looking back, he says, it was the best professional decision he's made, "because it opened the door to the career I was to make," a career that's seen him rise to head the chemical conglomerate's global real estate and facility team, partly on the strength of his work in Asia.

He sees the benefits of sudden change on a national basis too, even if living through those early days of reunification was unpleasant.

"A lot of people felt it was not right, but it's the way it happened," he says. "Looking back 25 years, I think it was the best that could happen to us. It was shock therapy. But looking at the other Eastern European countries that had more time to adapt, they are still at the level of trying to recover. It was a shock, but we had a lot of funding from the West. And as happens fairly often with a big shock, you get over it all that much faster."

Whether the East has gotten over it is an open question. Last year unemployment hovered above 10 percent in the former East German states, and a government report said living standards there were still only two-thirds as high as standards in the West. But there's no denying improved corporate investment in the states of Saxony-Anhalt, Thuringia and Saxony, as well as Brandenburg and Mecklenburg-Western Pomerania. 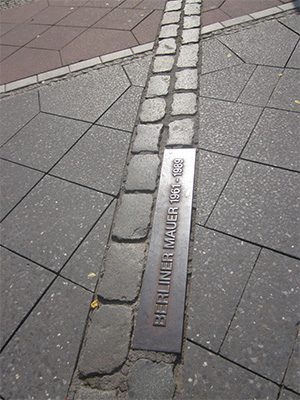 Bricks mark the path the Berlin Wall used to occupy.
Photo by author

Glatte notes that the early 1990s construction boom kept rolling only as long as significant tax incentives were present. "This again shows the benefits and curse of tax incentives," he says. "They are there, they create a huge bubble, you take them away, and it all implodes."

Nevertheless, as BASF leaders have stated in the past, the company never would have invested 1.3 billion euros (US$1.6 billion) to redevelop the Schwarzeide site in East Germany, about 90 minutes south of Berlin, without those incentives. Overall, West Germany has poured the equivalent of $1.3 trillion into the former East Germany, and hundreds of US companies have invested in growing sites there as well. According to the US Dept. of State, "German states located in the former East Germany have received over half the EU subsidies allocated to Germany, 15.1 billion euros [US$20 billion], for the budget period of 2007-2013."

One prominent example of facility investment in the former East Germany from BASF is a flagship shared services center that opened in Berlin in 2005. Glatte says the location decision was made at a time when many companies were placing such operations in India or in Eastern European territories such as Slovakia or Romania. 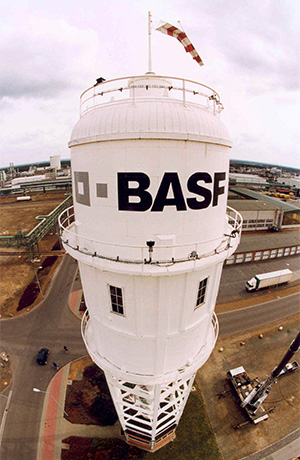 The water tower and mononitrotoluol plant at BASF Schwarzheide GmbH, a site in the former East Germany where the company has invested more than $1 billion to renovate and update production, and where around 2,000 employees work today.
Photo courtesy of BASF

"A lot of people could not understand the decision, but it set a precedent, and other companies such as E.ON followed BASF and also set up shared services centers in Berlin," he says. "From our viewpoint, it was a very good decision — we get all the languages we need, and get competent staff at a reasonable cost." Moreover, he says, real estate prices in Berlin also remain relatively low, especially for a vibrant city of 4.5 million people. Today BASF Services Europe, located in BASF Tower, a former light bulb manufacturing site in Berlin's Friedrichshain district, employs 1,200 people from more than 50 countries, and performs services for more than 200 BASF companies in 65 countries.

The chemical company in Schwarzeide had been one of the largest employers in the region. "With the downturn of the entire industrial base of East Germany, it was important that some companies were kept in place," explains Glatte. "So BASF bought this company for a rather small amount of money. It was really run down and in poor shape, with an inefficient operation."

Today, it's a completely turned-around site, cleaned up, efficient, and employing around 2,000 people. "The entire area is an oasis of prosperity in a region which still suffers social difficulties," says Glatte. "It would have been much easier to buy it, close it, and produce from our main site in Ludwigshafen. But to continue the production, invest all that money, tear down most of the buildings, build more efficient ones and provide employment showed a very strong commitment to that region." 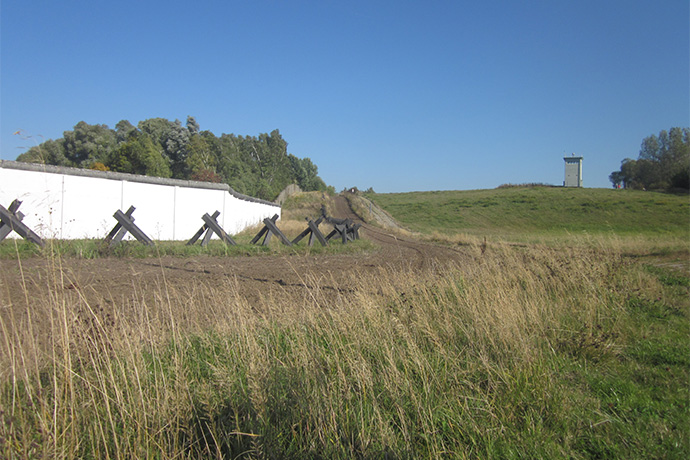 When the border opened in 1989, people in Offleben used parts of the wall over to make the bridge crossable again. East Germans, given welcome money of 100 German marks, immediately proceeded to buy out the supermarkets of bananas and other exotic foods. And the pubs were full. "There was a lot of drink, including a brownish drink that was just horrible,” says a tour guide with the Border Zone Museum in Helmstedt. “My husband suffered for three days afterward. And there were big tears.”
Photo by author