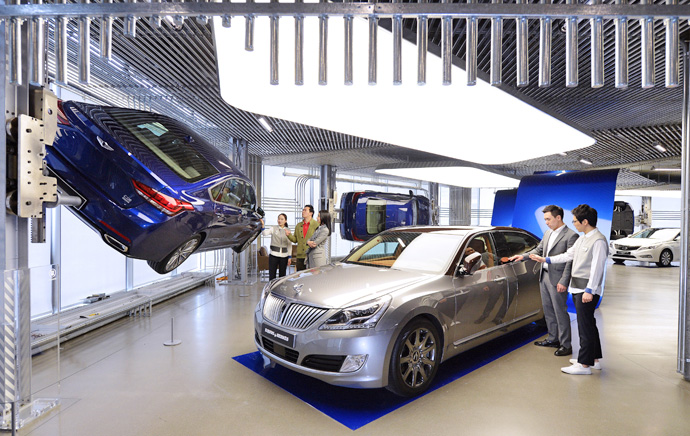 Hyundai Motor Company, the fastest-growing automaker by brand value, in May 2014 opened “Hyundai Motorstudio” in Gangnam, one of Seoul’s busiest districts.
Photo courtesy of Hyundai
by ADAM BRUNS
T 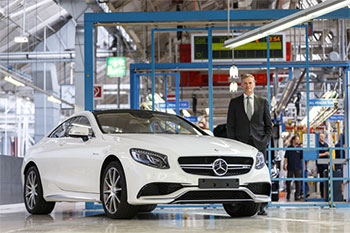 Markus Schäfer, Member of the Divisional Board of Mercedes-Benz Cars, Production and Supply Chain Management, in the S-Class Coupé assembly area at the Sindelfingen plant in Germany.
Photo courtesy of Daimler

he domestic US industry is rebounding and the Mexican auto sector is soaring on the power of multiple megaplants. But global carmakers also continue to expand facilities and employment at locations on the 83 percent of the earth’s land mass that’s located outside of North America.

After all, some markets look more promising than the old standbys. Witness Volkswagen Group’s October announcement that it had delivered 7.4 million vehicles during the first three quarters of 2014. The breakdown? While the 2.9 million delivered in Europe showed 6.4-percent growth over 2013, and the US was up by 5.1 percent, the Asia Pacific saw 13.8-percent growth to nearly 3 million vehicles, with 2.72 million of them going to China, which showed 15.2-percent growth all by itself.

Around the same time, Hyundai Motor Co. revealed that its global brand value had surpassed $10 billion for the first time, a dramatic rise from $3.5 billion in 2005 that’s been driven by successful products, global manufacturing investments and accompanying investments in design and marketing assets.

In Seoul’s Gangnam district, the automaker opened its first brand experience space, Hyundai Motorstudio, while a second one is scheduled to open in Moscow later this year. In September, Korea Electric Corp. revealed that Hyundai had submitted a winning bid of approximately US$10 billion, outbidding Samsung, for a parcel of land in the district that KEPCO had put up for auction — reportedly triple the property’s assessed value. According to media reports, Hyundai plans to build a “control tower” and various amenities and tourist-oriented facilities on the 79,342-sq.-m. (854,000-sq.-ft.) site.

Hyundai’s plant in Turkey, Hyundai Assan Otomotiv Sanayi (HAOS), in July produced its 1-millionth vehicle. After doubling the plant’s capacity last year to more than 200,000 units with an investment of $609 million, the plant has added the all-new i10 to its production line-up alongside the i20. Established in 1997, HAOS was the first overseas plant among Hyundai Motor’s seven current plants outside of Korea, and was the start of the brand’s globalization program. Now the plant exports to more than 30 countries, mainly in Europe. The production capacity of Hyundai Motor in Europe will exceed 500,000 when counting the output of the company’s Czech Plant in Nosovice.

For a number of major OEMs, it appears that crossed purposes can be a good thing.

Also in October, at the Paris Motor Show, Renault-Nissan and Daimler looked back at their four-year-old partnership that began with three projects in Europe and has now expanded to 12 projects in Europe, Asia and North America. The two companies are launching the first three vehicles co-developed from scratch this fall: the Renault Twingo, and the smart fortwo and smart forfour. The smart fortwo is being built at smart’s Hambach plant in France, while the Twingo and the smart forfour are being produced at Renault’s plant in Novo Mesto, Slovenia. 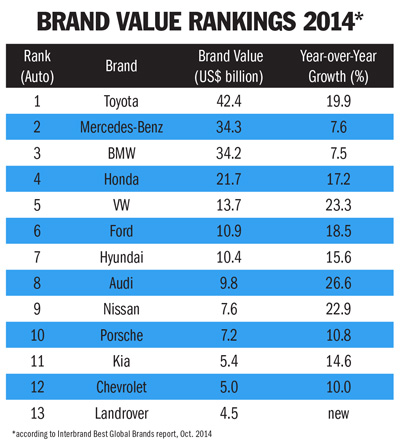 The two companies announced their jointly owned facility in Aguascalientes, Mexico, in June 2014 that will start production in early 2015 near an existing Nissan plant and eventually have an annual capacity of 300,000 units. Premium compact vehicles will also be produced at other Daimler and Nissan plants around the world, including Europe and China. A new powertrain facility in Decherd, Tenn., will initially be used in European versions of the Infiniti Q50 sports sedan and the Mercedes-Benz C-Class, produced in Tochigi, Japan, and Tuscaloosa, Ala., respectively. And the new Mercedes-Benz city van Citan, based on Renault’s Kangoo light commercial vehicle, is produced at Renault’s plant in Maubeuge, France, where the Kangoo is produced.

In mid-2015, Infiniti will begin production of its new compact hatchback premium vehicle Q30 at Nissan’s Sunderland plant in the UK, with production of the QX30 compact SUV starting shortly thereafter. Infiniti plans to supply the Q30 and QX30 globally from Sunderland, including to the US and China.

“The global scale of our projects ensures that this collaboration will continue to grow, and we expect to remain partners for the long run,” said Carlos Ghosn, chairman and CEO of Renault. “This partnership has accelerated the time-to-market for significant vehicle launches and has been an obvious strategic advantage for Renault and Nissan. We remain confident about our relationship for the foreseeable future.” 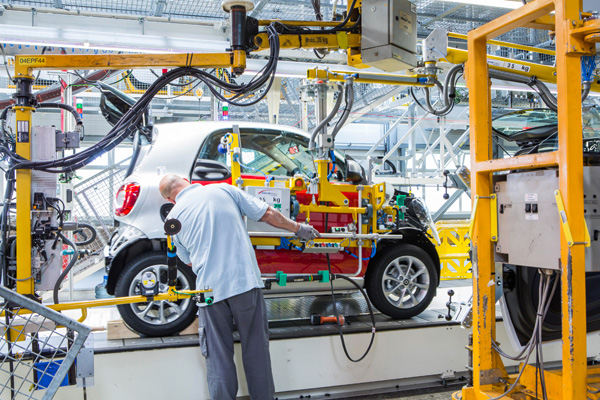 Daimler’s plant in Hambach, France, in the Lorraine region, celebrated its 20th anniversary this year. In July, after a €200-million (US$253-million) investment, the plant, which plays a part in the company’s partnership with Renault-Alliance, began producing the new smart fortwo model. Known as “smartville,” the site features a central building “surrounded by separate halls for system partners and their production of components, pre-assembly of modules or provision of logistics services.” System partners include Magna Chassis, Magna Doors, Faurecia, ThyssenKrupp and SAS.

In-house anniversaries also have been in order, even as new partnerships are formed. Ghosn earlier this year was in Sandouville, France, where he and Emmanuel Macron, France’s Minister for the Economy, Industry and Digital Sector, opened a new production line to manufacture the new Trafic commercial van. The line will also produce a vehicle for Fiat beginning in the second quarter of 2016. The plant, inaugurated in 1964, received an investment of €230 million (US$292 million) to support the new line, part of a March 2013 agreement Renault signed with its social partners called “Contract for a new dynamic of Renault growth and social development in France.”

Just as Renault renews vows with its home country, so too does Mercedes-Benz, which is investing more than €3 billion (US$3.8 billion) to increase capacity and modernize at its German passenger car and powertrain plants.

According to a press release, this year alone, Mercedes-Benz is managing 18 vehicle ramp-ups at eight locations worldwide, among them the start of production of the new C-Class sedan on four continents. But German plant investments include €1 billion in Sindelfingen, €1 billion in Untertürkheim, €750 million in Bremen and still more investment in Rastatt, where an all-electric drive has been integrated into compact car production.

LOOKING FOR SOME SUPPORT

The European Automobile Manufacturers’ Association (ACEA) represents the 15 Europe-based car, van, truck and bus makers, including BMW Group, Daimler, Renault, PSA Peugeot Citroën, Volvo and the European branches of Hyundai and Toyota. This summer, as the European Commission’s €80-billion (US$101.7-billion) Horizon 2020 Research and Innovation framework unfolds, the association published a policy manifesto to help sustain a strong business climate for an industry that it says:

The three pillars of ACEA’s reform agenda are to drive innovation; foster growth through open international trade; and build a supportive regulatory structure.

“We need the flexibility to continue driving innovation in our priority areas of environmental performance, safety and connectivity,” said Carlos Ghosn, ACEA president and chairman and CEO of Renault. “To this end, we need policies and regulations that encourage rather than restrict innovation, and that are technology-neutral … Europe’s policy makers and industry leaders need to work together to build the right conditions for growth, jobs and investment. Together, we can ensure a future in which Europe’s industry is sustainable, and its citizens are prosperous and mobile.”

The new manufacturing organization Mercedes-Benz Operations (MO) is based on global production networks and centralized responsibility for logistics and quality. “Under our previous production structure, the individual plants operated largely autonomously,” said Markus Schäfer, member of the Divisional Board of Mercedes-Benz Cars, Production and Supply Chain Management. “Now, manufacturing will be organized according to product architectures, independent of individual locations.”

The new C-Class is the first model series to be built entirely in accordance with this principle, the company explained. It went into production on four continents within just six months earlier this year: Bremen came first in February, followed by the East London plant (South Africa) in May, the Tuscaloosa plant (USA) in June, and the BBAC plant in Beijing (China) in July. Bremen is the lead plant and manages all aspects of C-Class production, including training of colleagues from other sites worldwide. “Around 500 employees from plants outside Germany have received intensive training so that, as multipliers, they can pass on their knowledge within their home plants,” said Mercedes-Benz.

Mercedes-Benz negotiated a package with the works council in Sindelfingen at the end of July: Along with investments totaling €1.5 billion, it also includes necessary cost optimization measures, ensuring the site’s future viability. Regarding the outlook for the German plants, Schäfer explained: “We are continuing to invest in Germany and thereby safeguard jobs. At the same time, each site needs to be internationally competitive in its own right.”