Certified industrial real estate is primed for development near Toledo, thanks to layers of infrastructure and collaboration. 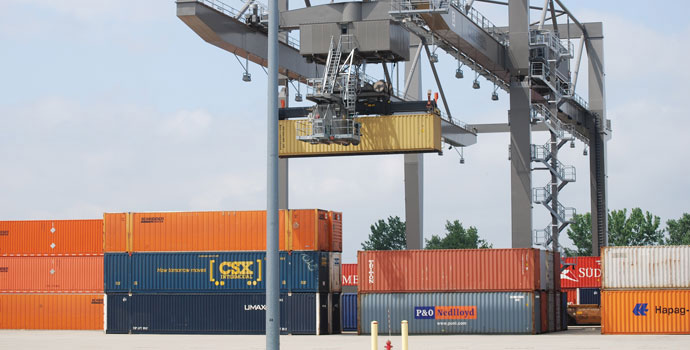 CSX already is expanding its $175-million Northwest Ohio Terminal with another $40-million investment, which will stretch its capacity to 1 million containers a year.
Photo courtesy of CSX and RGP
by ADAM BRUNS
B

efore any land deals can go down, there had better be some high-quality infrastructure in place: power, water, wastewater and natural gas, for starters. Roads and interchanges are a must. Water transportation is important for some. But rail to a site provides an allure all its own.

Thanks to generations of public and private investment in such assets, one corner of Ohio is positioned well.

"Look at a national rail map," says Jonathan Gemmen, senior location consultant at Cleveland-based Austin Consulting. "You don't get much better than Northwest Ohio. They're so well endowed with rail in that area."

Ohio has more intermodal hubs (13) than any state but Illinois, and the rail infrastructure continues to stay a step ahead. Norfolk Southern has invested $12.7 million at its Airline Junction terminal in Toledo, as well as at its subsidiary Triple Crown site in Sandusky, and invested $160 million in an expansion of its classification yard in Bellevue. CSX's Toledo Terminal handles about 3,000 carloads of freight each day. The National Gateway Project, a PPP with CSX and seven other states, has increased clearances on CSX lines from its new $175-million Northwest Ohio Terminal in North Baltimore to multiple ports along the East Coast.

The next level of in-place infrastructure? Two dozen sites of more than 200 acres in size that are ready for action in Northwest Ohio.

"What you see in our region is an understanding of the importance in having sites ready for development," says Gary Thompson, executive vice president at the Regional Growth Partnership and director of the Northwest Ohio region for JobsOhio. "Teams driven by the business community are collaborating with government, utilities and agencies to create a high-level inventory of ready sites."

Among them is the 594-acre Van Wert Mega Site, located in the heart of the NAFTA Corridor along Interstate-quality US Route 30 some 35 miles from I-75 to the east and 35 miles from I-69 to the west. Served by AEP Ohio and Dominion East Ohio Gas, the site is part of AEP's Quality Sites program, and is undergoing certification for the state's Ohio Job Ready Sites program.

Water, sewer, fiberoptics and a new rail spur make the site one of two shovel-ready mega industrial sites in the whole state, with land options secured through 2022. Fort Wayne, Ind., and Lima, Ohio, are each a bit over half an hour away. But Van Wert has its own charms, says Gemmen.

" What you see in our region is an understanding of the importance in having sites ready for development."

"It's a rail town," he says, noting its strong set of employers and quality school system, which just built a new high school. "Just over two years ago, when I made my first visit, I was pleasantly surprised at what I saw, and the sense of community for a town that size. It's helpful when you talk about bringing in plant managers and executives to get a large operation started up."

The State of Ohio stepped up to the plate to invest in the rail spur, which Gemmen labels a game changer, and which will help other end users nearby. "This site has done the homework, and they're well positioned," he says.

So is the 300-acre shovel-ready Enterprise Industrial Park in Defiance County, positioned ideally between the CSX mainline and US Route 24, the "Fort to Port" highway from Fort Wayne to the Port of Toledo, with shortline service to boot. One major project that already landed there came from Consolidated Grain & Barge, and a larger megasite of 1,000 acres may soon be assembled nearby.

Central to the pitch for the area is growing natural gas infrastructure. A transmission line from ANR (now part of TransCanada) runs adjacent, with two 36-inch lines bringing gas from the Gulf Coast. Pending approvals, more may be on the way to move gas from the shale deposits in eastern Ohio. But what's already there is plenty. 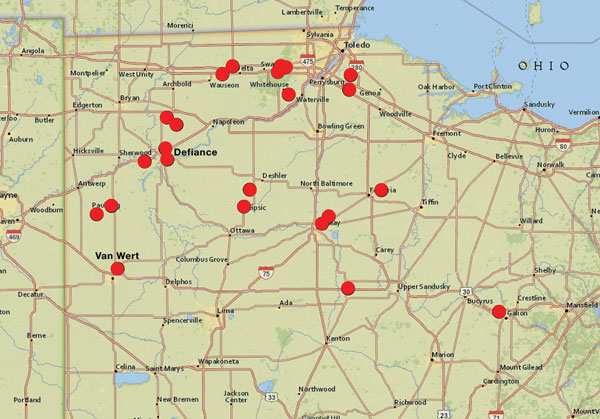 There's no shortage of shovel-ready property in Northwest Ohio, with 24 sites of 200 acres or more.

"Enterprise Industrial Park is in the city, and zoned for heavy industrial use," says Defiance County Economic Development Executive Director Jerry Hayes. Heavy-duty road and storm sewers are already in place. "It's between the two railroads, has a CSX computerized switch and lead track in place, and is adjacent to a 350-million-gallon raw water storage reservoir."

The flow of one of the busiest rail avenues in America may be the ultimate attraction.

"It's busy, but we are able to accommodate new business," says Steve Davis, regional manager of industrial development for CSX Transportation, noting that the mainline can be extended to accommodate additional customers. "The mainline switch is the most expensive component of a track. The community paid for that to attract a plastics customer several years ago."

As for broader distribution prospects in the region, CSX's relatively new intermodal hub in North Baltimore already is expanding, adding cranes and extending processing tracks with a $40-million investment that will give it the ability to process more than 1 million containers a year. The railroad appears to know a good location when it finds one, and so do its customers.

"If you're going to be on a railroad, I don't know where I'd rather be than on that CSX line," says Hayes.