Gold Dust in the Wind 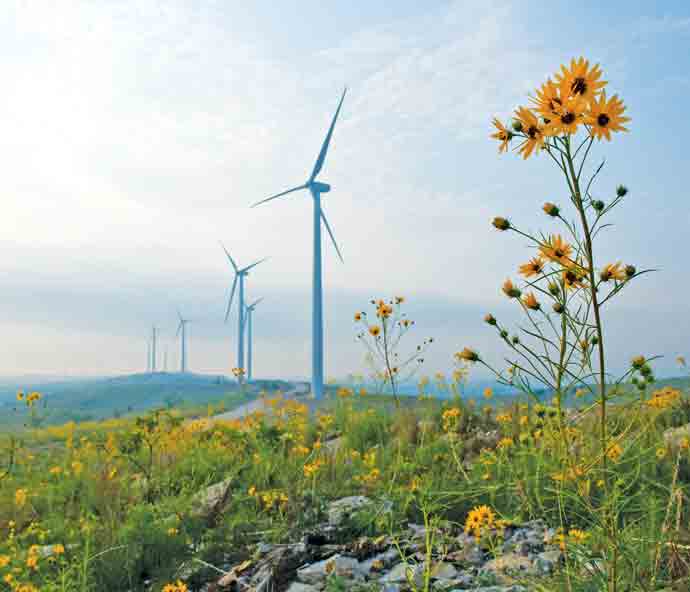 he rock band Kansas in 1977 famously compared human existence to dust in the wind. These days, folks in Kansas may be tempted to think that there's gold in that wind — gold, as in cold, hard cash, and lots of it.

Thanks to a series of tax reforms enacted by the Kansas Legislature and Gov. Sam Brownback since 2012, conditions in the state have never been riper for large-scale capital investment. As a result, Kansas is now reaping a windfall of corporate facility activity.

One of the companies leading the investment charge is EDPR Renewables North America LLC. EDPR owns and operates the Meridian Way Wind Farm in Cloud County, a 201-MW two-phase wind farm built in 2008. Also, EDPR will build the Ad Astra Wind Farm, a 2,000-MW wind farm in Coffey County, in 2015.

EDPR, which has a field development office in the Kansas City suburb of Overland Park, has additional wind energy projects in various stages of development in Kansas.

"Kansas is a great state in which to develop and operate wind farms," says Rorik F. Peterson, director of development for the Central Region of the US for EDPR, "and we look forward to developing, constructing and operating additional projects in the state in the future."

It also helped that Kansas adopted a Renewable Portfolio Standard (RPS) in 2009. "Electricity generated at Meridian Way and purchased via PPAs by Westar Energy and Empire District Electric Company contributes to both utilities' adherence to RPS requirements," says Peterson. "Likewise, electricity generated at Ad Astra and purchased via PPA by Kansas City Power and Light Company will contribute to KCPL's adherence to RPS requirements."

" Kansas is a great state in which to develop and operate wind farms, and we look forward to developing, constructing and operating additional projects in the state in the future."

- Rorik F. Peterson, director of development for the Central Region of the US for EDPR

Not counting the EDPR project set for construction next year, Kansas currently has 863 MW of wind energy under construction. With 2,967 MW of installed wind capacity, representing $5.5 billion in total capital investment, Kansas ranks eighth in total MW installed in the country.

According to the American Wind Energy Association, Kansas has the second-highest wind potential in the US. With 19.4 percent of Kansas' electricity provided by wind, Kansas ranks third for percentage of electricity coming from wind energy.

EDPR has been active in Kansas for almost 15 years, notes Peterson. "By the end of 2015, the company will own and operate roughly 400 MW of wind farms in the state," he says. "Kansas is an investment- and development-friendly state. Kansas has no state-level permitting regime for wind farms — investors should contact local county officials regarding local siting requirements."

Two years ago, Gov. Brownback pushed the Kansas Legislature to cut individual tax rates by 25 percent, repeal the tax on sole proprietorships, and increase the standard deduction. In 2013, he pushed the Legislature to cut taxes again. Since then, Kansas has grown its average weekly earnings by 4.82 percent — nearly four times the US average, more than four times earnings growth in Missouri and seven times that of Nebraska. Kansas has also lowered its unemployment rate to 4.9 percent, compared to the US rate of 6.1 percent and the Missouri rate of 6.3 percent.

"Kansas has become a leader in tax reduction, not only individual tax reduction, but also for small businesses," says Steve Kelly, deputy secretary for business development at the Kansas Department of Commerce. "There has been a real push by the state to be an incubator and a very attractive location for small business. If you are an LLC or sole proprietor or S corporation, there is no income tax on the revenue flowing from the company to you as an individual. There has also been a strong effort to streamline regulations to make it easier for companies to do business here, and we continue to be pretty active in incentives. We continue to tweak them to try to make them more effective."