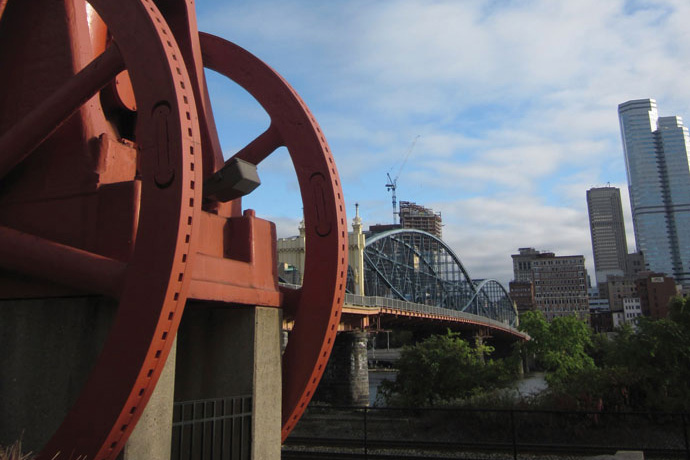 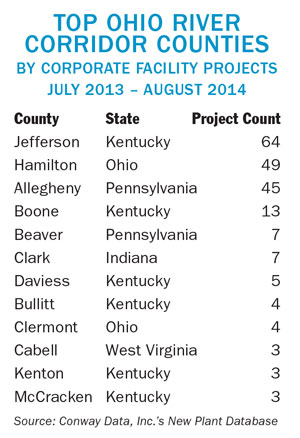 ite Selection’s latest analysis of corporate facility investment in each and every county along the Ohio River’s banks shows companies coming to Louisville, Cincinnati and Pittsburgh in droves … or being born there outright.

With 77 projects in Jefferson and Bullitt counties in Kentucky and Clark County in Indiana, Greater Louisville just beats out its fellow bi-state metro area of Cincinnati (71), with Pittsburgh coming in third (52), according to tallies of corporate facility investment projects tracked from July 2012 through August 2014 by Site Selection’s proprietary New Plant Database.

Together, the three metro areas account for approximately 82 percent of all projects (244) entered into the database during the examined time period.

Among other strengths, the Louisville region has added 14,000 jobs in manufacturing since the height of the recession in 2009, outpacing the national recovery rate, and added 12,400 overall jobs in 2013 alone. While those jobs range across a number of sectors, bourbon still stirs the drink. Add one more distillery to the 25 distillery investments in Kentucky tracked by Site Selection over the past four years, as Brown-Forman Corp. in late September announced that it will invest $30 million in a distillery and bourbon experience for its founding brand, Old Forester, in two historic buildings along “Whiskey Row” on West Main Street, among five the company now owns there. The new investment prompted Louisville Mayor Greg Fischer to coin a new term: “Bourbonism is real,” he said, “and just keeps growing in our city and our state.”

The downtown renaissance and entrepreneurial vibes are running in parallel in Louisville’s sister river cities (and rivals) upriver.

Kay Geiger, president, Cincinnati Northern Kentucky for the PNC Financial Services Group, knows well how the area has historically benefited from being home to so many Fortune 100 corporations such as Procter & Gamble. Now the area, driven by 15-county, three-state economic development organization REDI Cincinnati, is embarking on a “branding of branding” strategy that seeks to help companies of all sizes discover their identities and, most of all, find a prosperous landing zone.

“There’s a growing number of new companies being formed, a bookend to the history of Fortune 100s,” says Geiger. “There’s a new ecosystem around startups, as well as the middle-market companies that continue to be attracted.”

“Our private company space today is as large as our public company space,” says Jim Sowar, Cincinnati managing partner for Deloitte LLP, of a diverse client mix, including a vibrant family-owned business and start-up community. Ten accelerators undergird that community in the region. Sowar says many area start-ups are being run by senior leaders who have left careers in corporate America.

“They end up staying in Cincinnati because they love the community and found a great opportunity,” he says.

Buzzing in the ’Burgh

At Pittsburgh International Airport, a sign hovers over the escalators from Chevron’s “We agree” campaign: “Companies that work here should develop talent here.”

Big employers the likes of Chevron, PNC, simulation giant Ansys, Alcoa, BNY Mellon and others are doing that. But there’s even more evidence that the sign’s statement is being turned on its head: “Talent that works here should develop companies here.”

The venture capital world has voted with its money on a growing number of Pittsburgh start-ups. The East Liberty area, thanks to investments from Walnut Capital and others, is home to a major operation from Google, one of eight TechShops in the country, new transit-oriented mixed-use development and AlphaLab Gear, part of Ben Franklin Technology Partner affiliate Innovation Works, and recently ranked the sixth best accelerator in the US in as study by MIT and the University of Virginia.

Carnegie-Mellon University was one of the top five US universities in attracting VC funds for its spinout companies in 2013. Among the newest stars to emerge from its galaxy is Duolingo, a language-learning app that was Apple’s choice as app of the year in 2013. It was spun out of CMU in 2011 by co-founders Severin Hacker (yes, that’s his real Swiss name) and Luis von Ahn, and now has 40 million users and 37 employees.

“We started in Pittsburgh because we were in CMU and were not clear it was going to take off like it did,” Hacker says. “We stayed because what we needed to hire was engineers. The brightest engineers are coming out of CMU.”

Schell Games was founded in 2002 by Jesse Schell, who used to work in the virtual worlds space at CMU’s Entertainment Technology Center (ETC). Chris Arnold, general counsel and director of human resources at Schell Games, says about 40 percent of the firm’s more than 100 employees are graduates of the ETC, and more than 70 percent of Schell’s artists come from the Art Institute of Pittsburgh. At the same time, more than 80 of its employees hail from outside the city.

Arnold says the affordability of Pittsburgh means “we can offer things here that are unheard of in California and other locations on the West Coast and East Coast. We’ve been able to attract people with years of Triple-A experience because they can own a house, and send kids to public school. It’s led me to fall in love again with what we do and who we are as a region.”