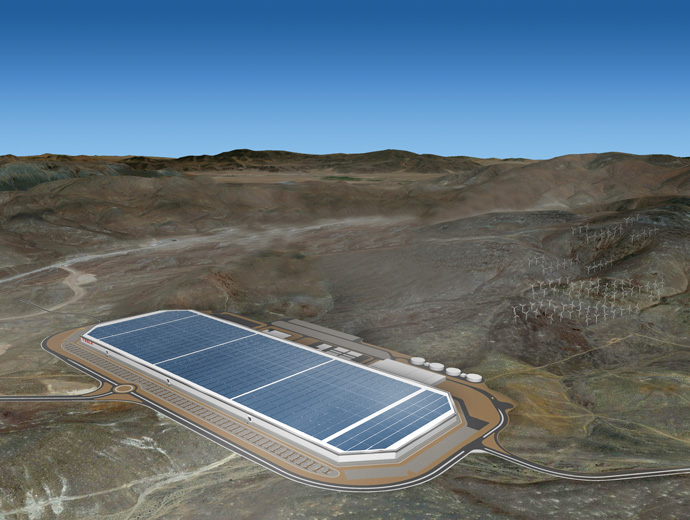 his isn’t youth soccer, where every team gets a trophy no matter how they played. It’s Tesla’s $1-billion lithium ion battery plant. And Reno, Nev., won it. Calling it a “day that would change Nevada forever,” Gov. Brian Sandoval announced in September that the Tesla Motor Co. project “sets in motion the creation of thousands of new jobs and streams billions of dollars into our economy.”

Elon Musk, Tesla’s founder and chairman, calls the 5-million-plus-sq.-ft. plant “a heckuva big factory,” to say the least. It will be one of the largest buildings in the world. The company will fill it with $4 billion worth of equipment. The estimated economic impact to the state will be $100 billion over the next 20 years. The project will create 3,000 construction jobs over a three-year period and, when complete, Tesla will provide 6,500 on-site jobs offering an average wage of more than $25 per hour. An additional 16,000 indirect jobs will be created in the community. 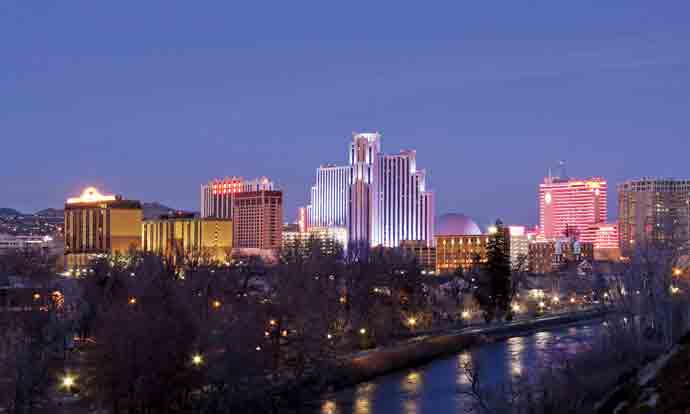 The state offered an incentive package worth $1.25 billion, mostly in the form of tax abatements. Tesla is free from sales tax for the next 20 years and received an abatement of real property tax, personal property tax and modified business tax for the next 10 years. The state is offering a discount on electricity rates for eight years and will expand and improve highways and roads into the site. The deal also includes tax credits for job creation and business growth. Some of the tax credits are repurposed from existing credits offered to the film industry. “All incentives are performance based,” said Steve Hill, executive director of the Governor’s Office of Economic Development (GOED). “Tesla has committed to do everything they need to do to get the incentives we’re providing. If they don’t do that, those incentives don’t exist.”

According to Sandoval, such an incentive deal is more than worth it. “This plan will result in more than $80 of economic impact for every dollar Nevada invests,” said Sandoval. Even more importantly, Tesla will directly impact the state’s education system from primary school through college. The company has pledged $1 million for an advanced battery research partnership with the University of Nevada-Las Vegas, and the K-12 system will receive a $37.5-million contribution from Tesla beginning in 2018. 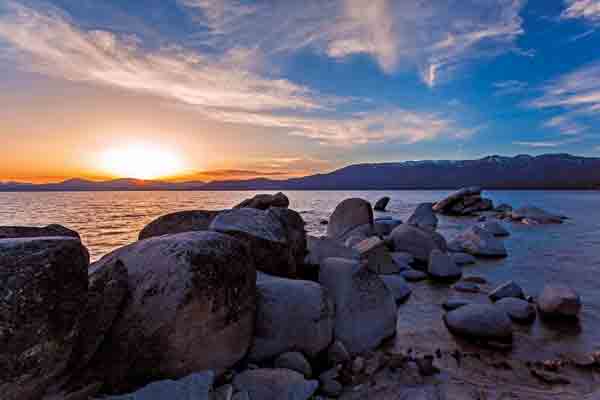 Nevada competed against other states for the gigafactory site, including California, Arizona, New Mexico and Texas. The City of Tucson went so far as to prepare a $3-billion building permit for Tesla, while the lame-duck governor of Texas, Rick Perry, drove to California in a Tesla Model S in order to tout his state’s friendly economic climate. All offered rich incentive packages, one of which Musk claimed was bigger than the one ultimately put forth from Nevada.

“It wasn’t just about incentives,” Musk said. “What the people of Nevada have created is a state that’s very agile. It’s a ‘get things done’ state. So in deciding where we should place this, we asked, ‘Where are we going to have high confidence that this factory is going to be ready on time so that when we’re ready to produce the vehicle, the factory will be ready to produce the battery packs?’ That was truly the most important thing, and, of course, whether we can operate the factory cost-effectively so the car itself would be affordable.”

Whether or not the state gave too much to Tesla will remain to be seen. “If I’m the governor of Nevada, I don’t really have the choice,” says site consultant Dennis McAndrews, principal at Cleveland-based Silverlode. “If I really want the project, I have to put in the one additional dollar that my competition has put in. If I feel confident the project is coming my way, I call the bluff and see what happens. If he makes the wrong calculation and the project goes elsewhere, there’s a ton of political flak in the other direction. I think you’d get the same criticism whether this was a $1.3-billion deal or a $750-million deal.”

One South Church, the landmark building in the heart of downtown Tucson is now home to global engineering firm HDR and Regus, the world’s largest provider of flexible work space. HDR leased 9,659 sq. ft. (897 sq. m.) of space, while Regus will occupy the entire twelfth floor. 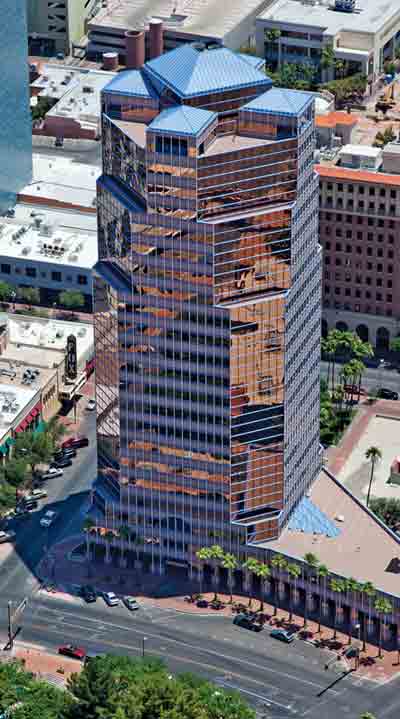 “We’re very excited about the Tucson market,” said Rob Downing, regional director of real estate for Regus. “The Southwest, and Arizona in particular, has been a focus for us for several quarters. Our Phoenix centers are performing exceptionally well, but our clients were regularly inquiring about locations in Tucson. With the space at One South Church, we will finally be able to meet that demand.”

The Regus work center space is undergoing tenant improvements and is expected to open in mid-December. The company is also looking for a second location in north Tucson with the goal of opening that work center in 2015.

HDR is relocating to One South Church from another Tucson location. The firm was instrumental in bringing the Sun Link Modern Streetcar project to completion. This move puts the firm squarely on the streetcar’s 3.9-mile (6.3-km.) route.

Built in 1986, the 23-story high-rise remains a landmark in the Tucson skyline. Along with the University of Arizona and Tucson International Airport, One South Church creates a thriving junction of economic activity for the city of Tucson.

If the Tesla project were in the Midwest or the South, the company would be eligible for those types of exemptions and they wouldn’t be called incentives. “What you’re seeing is Nevada trying to convert from the economy it currently is to a more manufacturing-based economy,” McAndrews adds. “There are probably temporary taxation structures that stand in the way of that. The short-term fix to that was to make incentives to break down those barriers. I would suspect in the long term we’ll probably see some tax reform in Nevada.”

A Way To Differentiate

Barry Broome, president and CEO of the Greater Phoenix Economic Council, says he wishes Reno well, and then says Arizona never had a real shot at landing the deal. “A state like Arizona is always going to get outgunned for a project like Tesla,” he says. “We gave Tesla a very aggressive package, but if someone is going to be committed to underwriting their power costs and providing all their land and infrastructure for free, eliminating all taxable items on the asset over 30 years, if that’s going to be the decision-maker, we’re never going to win a project like that.”

Broome says Arizona is in the talent development business. “States that are trying to drive a footprint into advanced industries and export industries, instead of having a generation of consistent investment in education, science and technology to build that, they swing for the home run and go after projects like Tesla,” he says. Asked whether he believed Arizona would go after another Tesla gigafactory, Broome says it depends on what they’re looking for.

“If you’re making a talent decision, you’re picking Phoenix over Reno anyway,” says Broome. “We want to stay in the talent business. We’re putting our money in producing skilled people. We’ll give aggressive incentives, just like we did Apple, but we’re probably not going to financially underwrite your equity partner’s risk in the deal. It depends on the next objective. If they go out on the market and they’re looking for something near Reno and they’re making a decision about access to engineers and technical talent, we’re going to be right in there.”

Broome is excited about a new workforce development initiative called Velocity, a regional effort two years in the planning as part of a metropolitan business plan with the Brookings Institution. “Our Arizona State University (ASU) engineering school is very good, but our goal is to double the size of our engineering programs in this market over the next 10 years,” says Broome.

The emphasis is being placed on community colleges and STEM education in the K-12 system, aligning those programs with industry, and producing 71,000 more engineers in the next 10 years and over 90,000 more qualified communication/information technology workers in their market. “We’re a very affordable state,” Broome adds. “We have an extremely low regulatory environment. If we see a transformation around talent, that’s going to be the piece that differentiates us.”

“We look forward to our New Mexico expansion, as New Mexico has an extremely talented workforce and newly improved tax climate for manufacturing and exporting” said Rob Holland, CEO of Flagship Food Group. “We are thrilled to be in this state.”

That’s music to the ears of Governor Susana Martinez and her team at the state’s Economic Development Department (EDD). “We are working hard to promote growth and attract new investments, and our business environment is becoming much more competitive as a result of those reforms.”

Flagship is a global, highly diversified food company distributing its products to retailers such as Costco and Albertson’s grocery stores. Flagship intends to hire 300 employees total over the next few years, starting with 155 employees in Albuquerque over the next year. The company also purchases more than 2.5 million pounds of New Mexico’s blisteringly hot Hatch Green Chile annually.

Franco Whole Foods announced plans to expand operations to Las Cruces in June. The company makes tortillas and supplies them to retailers such as Costco and Whole Foods. “What is great about Franco Whole Foods is that they are a producer and exporter of tortillas, which means they don’t compete with our local tortilla makers, and they bring dollars into New Mexico from out of state,” said EDD Cabinet Secretary Jon Barela. Franco will create 160 new jobs in Las Cruces.

The EDD is providing $75,000 in Local Economic Development Act (LEDA) funds to help offset costs of upgrading a vacant warehouse to meet manufacturing and food safety standards. Franco Whole Foods also qualifies for JTIP, a program which assists companies by reimbursing 50 percent of wages while training New Mexico workers for new positions. The City of Las Cruces will also complement training dollars through its Wage+ Program.