The Dynamic Duo: Chemicals and Plastics

Creating plastics from chicken feathers, and other manufacturing marvels. 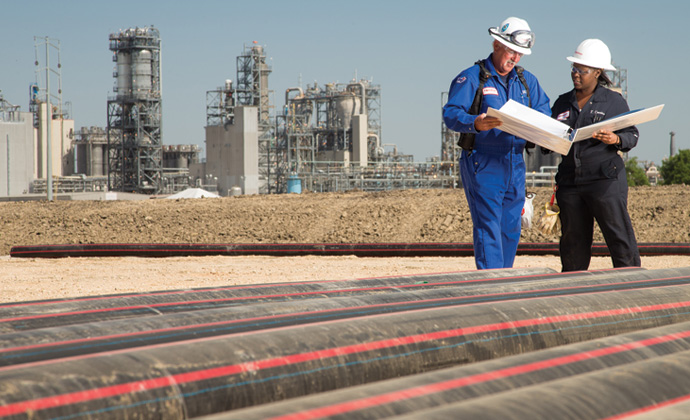 ExxonMobil is expanding its polyethylene plant near Baytown, Texas, to produce more high-performance premium plastics for export to global markets.
Photo courtesy of Business Wire
by PATTY RASMUSSEN
I

nnovation is the hallmark of the plastics industry. Don't believe it? Check out the types of materials being used as feedstock. "Bioplastics have undergone a similar evolution as biofuels," says Michael Taylor, senior director of International Affairs and Trade at SPI: The Plastics Industry Trade Association. "You have both first and second generation. First generation is typically based on feedstocks, using grain and other food crops to produce resins. Second-generation polymers are based on things like switchgrass and waste like chicken feathers but have the same physical properties as if it were made from natural gas or crude oil, which is pretty amazing."

Advances in the industry blow Taylor's mind on a regular basis. While visiting a plant in Brussels, he learned that the company was making replacement parts for automobile engines out of plastic. "Hardly anybody knows that's going on," he says. "But the fact that plastic can take the place of a metal part in a functioning engine is amazing. People think trim, molding, gear-shift cover, but they don't think about the engine. The company said it took them a while to convince the customer to give it a chance, but they were able to do it and it's worked out really well."

Taken as a whole, the plastics industry was the third largest industry in the US based on total value of shipments. The sector employs close to 900,000 people in more than 15,900 facilities. "The majority of those facilities are plastics processors which are located in all 50 states - even Alaska and Hawaii have plastics processors," Taylor says. "Not that many, but they have them. You can locate a plastics processor anywhere you want, basically."

The biggest industry challenge remains the shortage of skilled labor in manufacturing, especially with regard to reshoring. "The trends that are fueling reshoring are all good and appear that they'll be around for a while - except one," Taylor says. "The counter-trend is the lack of skilled labor. If I'm going to

bring a facility back here, and I can't get enough machinists, automation technicians or polymer chemists, then that's a problem. It will have a chilling effect on things."

Taylor often assists foreign companies who want to locate in the US and says he encourages SPI member companies to look for sites near centers of excellence in advanced manufacturing, or those places where partnerships exist between universities and local business. "What I would really like to see is locations where you have incubators, in bioplastics for example," he says. "These companies do these things on their own, but states have the opportunity to distinguish themselves by offering this type of assistance. It becomes a differentiator."

While chemicals and plastics rely on innovation to provide a competitive edge, they also rely heavily on affordable natural gas. Nearly 30 percent of the US natural gas supply is used by chemical and other industrial sectors. To help meet those needs, ExxonMobil Chemical Co. is building a multi-billion-dollar ethane cracker at its Baytown, Texas, facility. The steam cracker will have capacity up to 1.5 million tons per year and will provide ethylene feedstock for downstream chemical processing.

"Shale development has provided US chemical producers a double benefit as an energy source and as a key raw material to make plastics, creating jobs and economic activity across the value chain," says Steve Pryor, president of ExxonMobil Chemical Co. The Baytown project will create 350 permanent positions at the facility and expects to generate more than $90 million per year in additional tax revenue for the local community.