I’ve been on the board for a long time! I was elected at the fall 2008 Oklahoma City Professional Forum and had been a committee co-chair for some time before that. Almost six years after joining the board, I will pass the chairmanship to my colleague Kevin Dollhopf at the conclusion of the Québec City Forum.

My first observation on this tenure is I have enjoyed it immensely. My second is, “Wow, a lot has changed!”

Due to the strategies and financial prudence of IAMC’s early leaders, over this six-year period total membership grew by 112, about 22 percent. Forum attendance grew 57 percent, from 307 in Asheville to 481 in Pinehurst, almost 10 percent per year. Active members attending Forums rose by 51 percent.

As good as our numbers have been, IAMC’s qualitative transformation has been even more remarkable. Since the Asheville Forum, my first while on the board, we’ve augmented Forum programing with high-profile speakers, such as USS Cole Commander Kirk Lippold and blind Mt. Everest climber Erik Weihenmayer. In Québec City, we’ll have Lou Dobbs, a well-known and highly respected business journalist. At the same time, organic presenters, such as member Art Murray at the Pinehurst Forum, have achieved evaluation ratings rivaling those of expensive paid presenters. Art, we’re waiting for Part 2!

In 2008, members had two event choices: the spring and fall Professional Forums. But since 2012, IAMC Local has been making a mark on the organization by offering education and networking events in US cities between Professional Forum dates. IAMC Local hosts 10-15 events annually, each averaging 15-30 attendees. The member retention and recruitment benefits are significant. In 2008, IAMC had no operations outside the US. Today, we have small but growing communities in Birmingham, UK; Munich, Germany; Singapore; and São Paulo, Brazil.

Managed growth and change enable organizations to evolve. Otherwise, they stagnate. Most of us remember these companies that have faded away: Kodak, Pullman, Burger Chef, RCA, Montgomery Ward — the list could fill this publication. But growth for its own sake can be catastrophic. We need to stay focused on our core competencies and not try to be everything to everyone. We’ve all seen organizations go down this path only to dilute their brand and over-stretch their resources.

When I look back at the changes during my years on the board, I see IAMC’s vitality. We’ve made ourselves new in many small and large ways that have kept the support and enthusiasm of every member group. It’s important to try new ideas, but sometimes even the good ones don’t stick the first time. It’s okay to retest old ideas that didn’t take root the first time around, e.g., IAMC Local is a repackaged and tweaked version of the Regions program IAMC tried and then shelved in its early years.

IAMC continues to evolve. The best way to maintain the current progress is to try new ideas to keep the organization fresh and not lose sight of our founding principles. 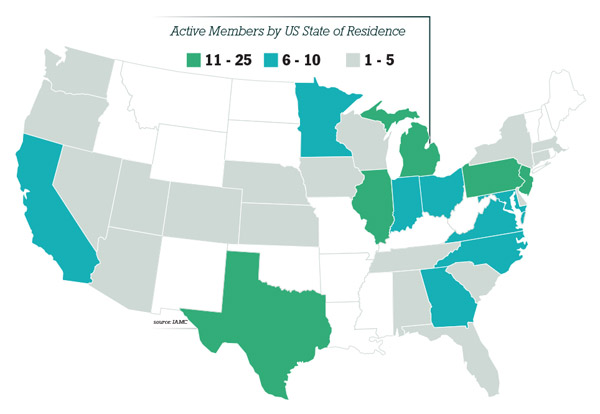 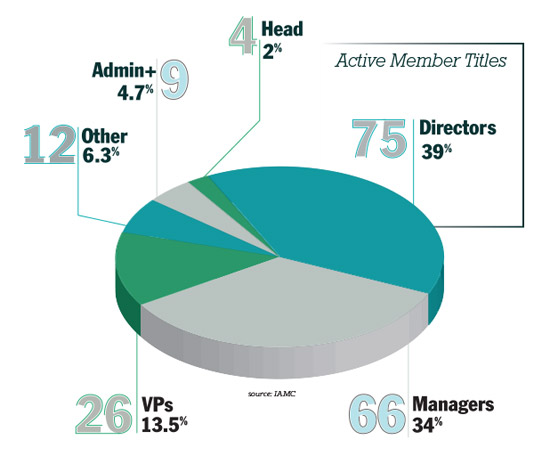 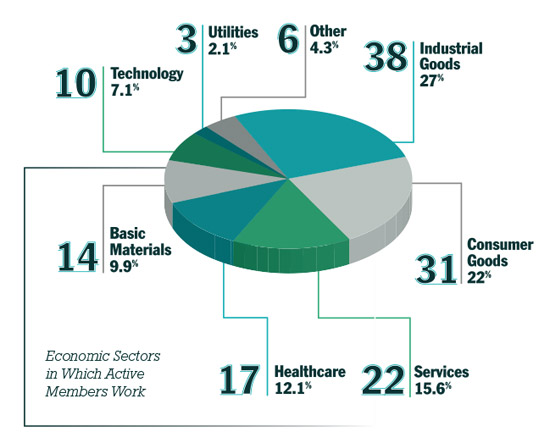 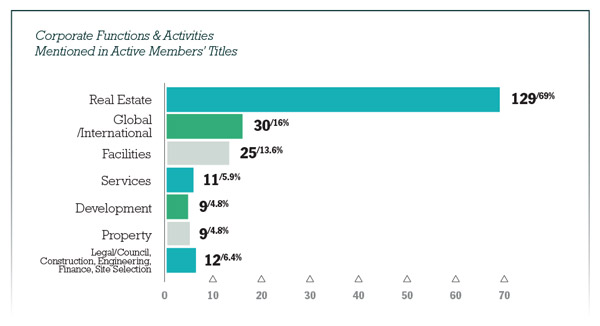 AMC's 192 Active members (corporate end-users) represent 141 large industrial companies based in the U.S. and five other countries. But these numbers disguise a rich variety among the members and their companies. Here, we'll break out some of the detail on both.

Three-quarters of Actives hold a title of director or manager, indicating most in this member group are positioned in corporate middle management. About 14 percent arguably hold senior management positions.

However, an analysis of Actives' titles suggests many of are responsible for more than just corporate real estate (CRE). It should be no surprise 69 percent have the phrase "real estate" in their title. And the words "global" or "international" are in the titles of 16 percent. In addition to CRE, the largest other function category mentioned in Actives' titles is facilities management.

The overwhelming majority of Active members, 85 percent, are men; 15 percent are women. This percentage is remarkable because U.S. Bureau of Labor Statistics (BLS) data indicate women held 38.2 percent of "management occupation" positions in 2012. At a finer level of detail, women held 47.6 percent of "property, real estate, and community association managers" positions. Women seem to be under-represented among the Active members.

Looking now at the economic sectors in which the Actives work, industrial and consumer goods manufacturing account for 47 percent of these members. This makes sense as corporate real estate in manufacturing environments is at the core of IAMC's brand.

Last, we'll look at high-level demographics of the companies employing the Active members. As would be expected of such large concerns, 87 percent are publicly held. Further, they typically have huge market valuations, pull in Amazon River-scale revenue streams, and on average they're fast growing in revenue terms.

In conclusion, IAMC's Active members reside in two-thirds of the U.S. states and a growing number of other countries. They are mostly middle managers. Most are men, and their titles identify them with corporate real estate. But many also have responsibilities outside this function.

Almost half of Active members work for companies that make physical products, but 28 percent are in the services sector. The Active members' companies overall are large and relatively fast-growing. am proud to introduce myself as IAMC’s new Executive Director. After over 30 years as an economic development professional, I had initial reservations about “leaving my profession” to become an association manager. However, the Industrial Asset Management Council (IAMC) is no average association and, as I am discovering almost daily, my role going forward is at the heart of the profession I love.

There are many fine organizations these varied professionals can join and share. However, IAMC maintains strict guidelines for membership that ensure no one part of the membership dominates the others.

My goals as Executive Director are to help in the managed growth of IAMC, maintaining the core principles that have guided the organization from the beginning. I am excited about the possibilities of a growing international presence by IAMC — a trend that mirrors the global nature of corporate real estate and economic development.

I have not changed professions — I have been provided an opportunity to shape my chosen profession through IAMC. I look forward to working with the entire membership, the active real estate professionals, the service provider associates and the economic development associates as we grow and shape our industry into the future.

IAMC INSIDER: Vigilance, Innovation and A Willingness To Change (Aug 21, 2014)