A conversation with senior leaders from Ameren. 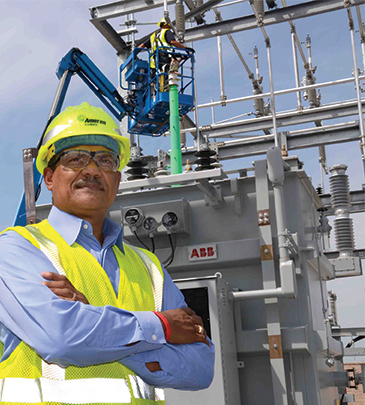 Richard Mark, president and CEO of Ameren Illinois, stands inside a new $8-million, 34.5-kV distribution substation being built in Shiloh, Ill. The substation will meet the service reliability needs of a new 94-bed health-care facility and future development, as well as the needs of residential and business customers in the area.
S

SS: How will Ameren's significant infrastructure investments affect the dependability, affordability and flexibility that all customers seek?

Richard Mark, CEO, Ameren Illinois: We have embarked on a modernization initiative to invest $3.5 billion to improve the reliability and performance of our energy delivery infrastructure. Our plan also involves replacing distribution and natural gas transmission equipment, strengthening poles, replacing cables and deploying new technology such as intelligent switches and sensors that can detect and isolate outages for faster service restoration. Down the road, advanced meters will "talk" to us electronically by sharing customer energy usage and we can "talk" back electronically giving our business and residential customers improved reliability, energy efficiency options, and service convenience.

Michael Moehn, CEO, Ameren Missouri: Ameren Missouri's investments in poles, wires and cleaner energy are paying off for customers. We are hardening our system by installing updated infrastructure that can better withstand storms; installing smart sensors and switches to reduce outages; replacing obsolete substations to ensure dependability; and constructing new overhead and underground lines. That's why outages are down significantly.

SS: Describe how Ameren is introducing clean energy alternatives into its resource mix.

RM: We support future R&D to bring affordable green power to the market and are committed to creating jobs and driving economic development in our service territory. While it might not be how you would think of green power, we do encourage our business customers to save money and lower costs through energy efficiency. We offer a variety of incentives and programs through our Ameren Illinois ActOnEnergy website. Hopefully in the future, green power will be more affordable. Today it costs more. We're focused on delivering power at the lowest possible price for our customers.

MM: To benefit customers, we are making investments for cleaner air and in renewable energy. We've also improved Missouri's electric grid so it is more dependable for Missouri families and businesses. Investments include more than $100 million for solar energy; approximately $100 million for new substations that power critical regional assets; and approximately $150 million to replace the reactor vessel head at Callaway Energy Center to ensure the continued safe and reliable operation of one of the country's top-rated carbon-free energy centers.

We are acting responsibly by moving toward cleaner energy while upgrading outdated and aging infrastructure to create a stronger and more dependable grid, while keeping our rates more than 16 percent below the average of states in the Midwest. These efforts help to make Missouri an attractive place for businesses to operate - they're critically important in terms of economic development.

SS: How does Ameren partner with institutions of higher learning? 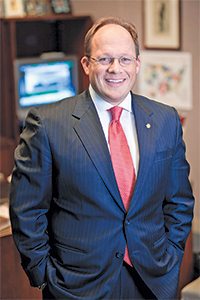 Michael Moehn is president and CEO of Ameren Missouri.

RM: As we have added new technology and implemented thousands of projects to develop a smarter grid, it has opened up entirely new avenues of employment within our company as well as outside partnerships. Last summer, we opened our $3.3-million Technology Applications Center just outside the campus of the University of Illinois, which will help facilitate R&D of smart-grid technologies and support the state's economic development and job creation goals.

With new technology comes job creation. We're working closely with higher educational institutions, and even K-12 schools, to introduce the energy sector as a viable and exciting career path. In short, we have to cultivate our own workforce pipeline.

From the beginning of 2012 until March 31, 2014, Ameren has hired 730 Illinois-based employees. Factoring in natural attrition, this hiring has resulted in a net increase of 452 employees supporting Ameren Illinois electric and natural gas service operations. By building a better region, we build a better future.

SS: What is your vision for economic development in Ameren's bi-state territory?

RM: We're a leader in that process. Whether it's providing key data, identifying prime development sites, or extending infrastructure to ensure that businesses have the capacity to operate, our economic development team is at the table to do whatever it takes to make a project happen. That's good old-fashioned economic development.

Business leaders need to hold one another accountable to change. We need to work together to prepare workers for next-generation jobs, and build strong communities. We can actively sell this state as a place where businesses can thrive and families can prosper. Ameren Illinois plans to be a leader in making that happen.

MM: Safe and reliable delivery of energy is critical to the growth and prosperity of Ameren customers and communities. In addition to being part of the critical infrastructure that helps drive our economy, the men and women of Ameren are proactive leaders in the community, helping to strengthen local and regional development capacity to compete in the global economy.

Ameren is a key leader supporting the dynamic two-state economy, promoting the region as a hub for advanced manufacturing, transportation and financial services, tapping the rich talents of a diverse workforce and positioning our region at the forefront of emerging technologies.