How creative marketers converged in Columbus to build a talented nucleus of product movers. 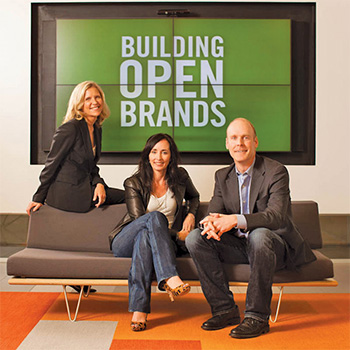 Nancy Kramer, founder and chairman; Kelly Mooney, CEO; and John Kadlic, president, form the brain trust that runs Resource, the largest digitally led advertising agency in the US. It has been based in Columbus since its founding in 1981.
Photos courtesy of Resource
W

hat do frozen pizza, Carrie Underwood and the top Twitter marketing moment of 2013 have in common?

If you guessed Columbus, Ohio, you're dead right.

The confluence of events that led these three subjects to converge last December is a story of intellect, innovation and industry that leads straight to the capital city of the Buckeye State.

When DiGiorno Pizza needed a marketing lift in late 2013, it turned to Resource, a digital advertising and social media agency headquartered in the Arena District of downtown Columbus. The results turned DiGiorno into an overnight sensation on Twitter and earned international acclaim for the creative minds behind the campaign.

DiGiornio gained national prominence during the airing of Carrie Underwood's live TV performance in "The Sound of Music" on NBC with a social media conversation centered around the frozen pizza maker that stole the show.

The Twitter campaign engineered by Resource garnered 80,000 followers in just a few hours and proved so successful that Advertising Age magazine named it the "No. 1 Twitter Branded Moment of the Year."

Terri Spring, executive director of client services for Resource, tells Site Selection that the company's Columbus headquarters location gives the firm the access it needs to the top talent in retail marketing and digital media.

"We recruit locally and nationally, and we benefit tremendously from the presence of highly skilled talent coming out of Ohio State University and the Columbus College of Art and Design every year," Spring says. "We can pull talent from local colleges and other creative ad agencies in the Columbus region. There is a rich storehouse of great marketing knowledge in the many retail companies based in Central Ohio." 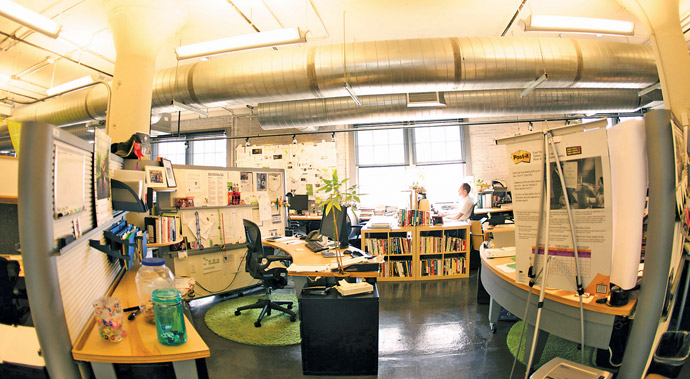 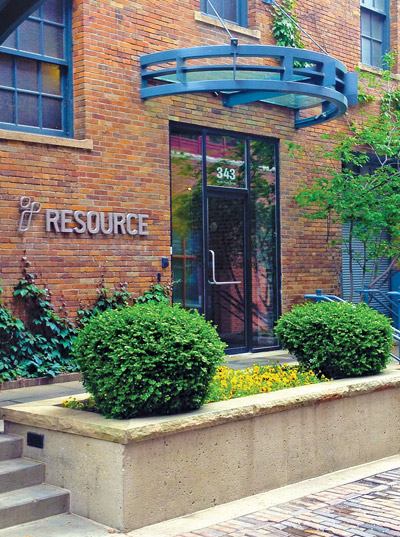 Resource, founded in 1981, is headquartered in the Arena District of downtown Columbus.

The interior space of Resource is a constant hive of creative activity.
Photos courtesy of Resource

The region also provides a sound business case for companies choosing to do business there, says Spring. "The cost of living is great here," she says. "Columbus is a great city for young people and a great place to raise a family."

The $60-million company recently acquired a sizable agency in New York and plans to grow aggressively over the next several years, notes Spring. "In 2011, we ranked No. 4 on Ad Age's A-list of best agencies, and the Wall Street Journal named us one of its Best Places to Work," she adds. "Our motto is 'Building Open Brands,' and we do this primarily through social media management."

It's Not Delivery; It's Digital

Resource is far from alone in building a cluster of creative minds in Columbus. At nearby Tween Brands and Homage, innovative entrepreneurs are assembling novel ideas and harnessing the power of the Internet to sell everything from girls' jeans to vintage sports memorabilia.

Rolando De Aguiar, executive vice president and CFO of Tween Brands, says the New Albany-based company relies heavily upon big data for nearly everything it does, from store site selection to product marketing.

"We are always trying to figure out what the next 'it' is," says De Aguiar, whose company operates about 1,000 Justice stores in the US and Canada. "We have a very large data center here in Columbus, and we will soon have two in the Columbus area. We also have a 750,000-sq.-ft. distribution center here for all five of our brands, and it is fully automated. We will be moving to a fully roboticized data center in 2015." 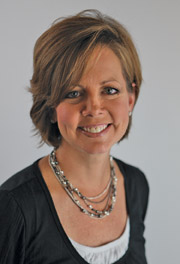 " We recruit locally and nationally, and we benefit tremendously from the presence of highly skilled talent coming out of Ohio State University and the Columbus College of Art and Design every year."

While e-commerce sales represent about 10 percent of Tween Brands' business, "it is growing each year," notes De Aguiar. "Our average customer is with us for 2.5 years. We are very good at knowing our customer. We send out about 100 million emails every year, and we have a response rate of 4 to 10 percent."

Tween employs nearly 400 workers at its 200,000-sq.-ft. headquarters in New Albany. The $1.5-billion company is the marketshare leader in the tween-girl apparel market, says De Aguiar. Walmart is No. 2.

Founded by retail magnate Les Wexner in Columbus, Tween was spun off by Limited Brands and became part of the Ascena Retail Group Inc. family in November of 2009. Ascena recently opened a new $75-million distribution center in Etna Township and an 880,000-sq.-ft. shared service complex and warehouse in Pataskala.

De Aguiar says several factors make Columbus the perfect home for Tween. "The economy here is just right for us," he says. "The retail experience embedded in the people is quite good. We can attract the caliber of people we need. About 85 percent of our workforce is female, and our average employee age is 28. That is why we stay here." 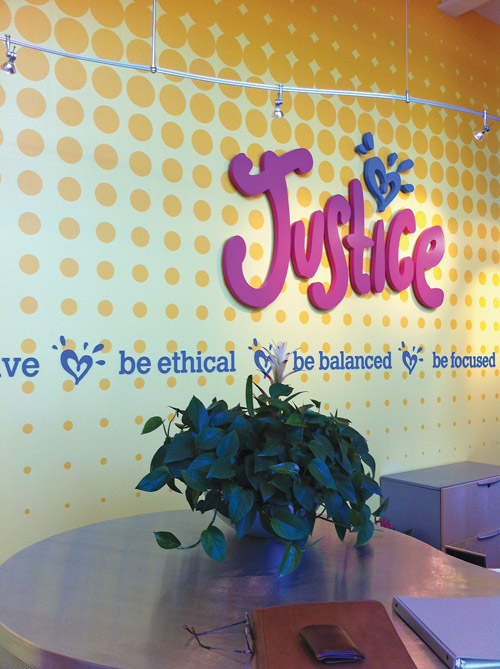 Tween Brands, parent company of Justice, employs nearly 400 people in New Albany, a suburb of Columbus. Eighty-five percent of the HQ workforce is female, and their average age is 28, says the firm's CFO.
Photo by Ron Starner

Most people don't know that Tween is also a manufacturing company, says De Aguiar. "Ninety percent of our apparel, we make ourselves," he says. "We plan to open an additional 25 to 30 new stores this year."

Also following an accelerated growth trajectory is Homage, a Columbus-based retailer that describes itself as a company that "turns back the clock with shout-outs to eclectic moments and personalities in sports, music and popular culture."

Its philosophy is summed up as follows: "From Bruce Lee to Larry Bird, we tell stories of triumph, individualism and hustle, preserving the old school and creating new legacies. Pay Homage."

Jason Block, president of Homage, says the company launched in 2007 and has been growing every month since. "We have two stores in Columbus and we will be opening one in Cincinnati this October," he says. "With the help of tax credits from Columbus 2020, we will be doubling our square feet here at our 13,000-sq.-ft. headquarters location in Easton Town Center in February of 2015."

Block says the vintage-inspired, made-in-the-USA retailer actually became an e-commerce company before it had any physical stores. "Our garments are made in Los Angeles, and e-commerce put the store on the map. It became so popular that we decided to open stores in the Short North district of Columbus and Easton Town Center."

Block says Homage likes Columbus because "it is a great place to live, the logistics here are great, and there is an abundance of other retailers here. We can cherry-pick the best talent."

He adds that "online is our bread and butter, and Columbus is nationally regarded as an e-commerce hub. The cost of living here also is low, and we can reach nearly every place in the US from here in two days or less." 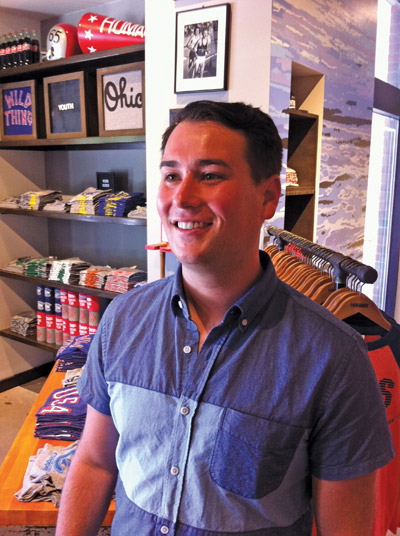 " It is a great place to live, the logistics here are great, and there is an abundance of other retailers here. We can cherry-pick the best talent. "

The roll call of companies that operate in the e-commerce and retail technology sector in the Columbus area is both deep and rich. Sporting such names as Alliance Data Retail Services, Chute Gerdeman, the Farsite Group, FITCH, SeeMore Interactive, Big Red Rooster and Gwynnie Bee, the region's cluster of e-commerce retailers and support firms rivals that of anyplace else in the nation.

In fact, nearly 9,000 people are employed throughout the Columbus region by worldwide apparel companies such as The Limited, Abercrombie & Fitch and DSW.

Fifteen Fortune 1000 headquarters are based in Columbus, and both IBM and Battelle operate big data installations in the area. Ohio State University, already home to 150 faculty members doing research in data analytics, is adding a state-of-the-art data analytics program that will add up to 60 more faculty members.

Since the economic development partnership known as Columbus 2020 was formed in 2010, Columbus has created over 92,000 new jobs and added more than $4.3 billion in capital investment, according to Kenny McDonald, CEO of Columbus 2020.

"Columbus could be the next Austin in five years," says Mark Kvamme, co-founder and partner of Drive Capital, the largest venture capital fund in the Midwest. "Columbus has become an innovation place because of Les Wexner."

Kvamme left Silicon Valley and set up shop in Columbus because he is bullish on the innovation and entrepreneurialism he sees pent up in the Midwest.

"I think that Les is the best serial entrepreneur in the US, and there are plenty of other folks like him here in Central Ohio and the surrounding region," says Kvamme. "Ohio State University is second in research dollars. We have built our company on the belief that the number one place to build a technology company is the Midwest."

He adds that "this is where the customers are - the manufacturers of consumer goods - and the cost of living is so much lower here than it is on either coast. The bottom line is that the talent, the access and the capital are all here."

Likeminded people are lining up to join him, notes Kvamme. "We are batting one thousand in recruiting people to Columbus," he says. "This is a great place to live."

This Investment Profile was prepared under the auspices of Columbus 2020. For more information on the Columbus Region, please contact Kenny McDonald at km@columbusregion.com or 614-225-6063. On the Web, go to www.columbusregion.com .