Defiance County boasts a mighty confluence of quality labor and logistics. Always has. 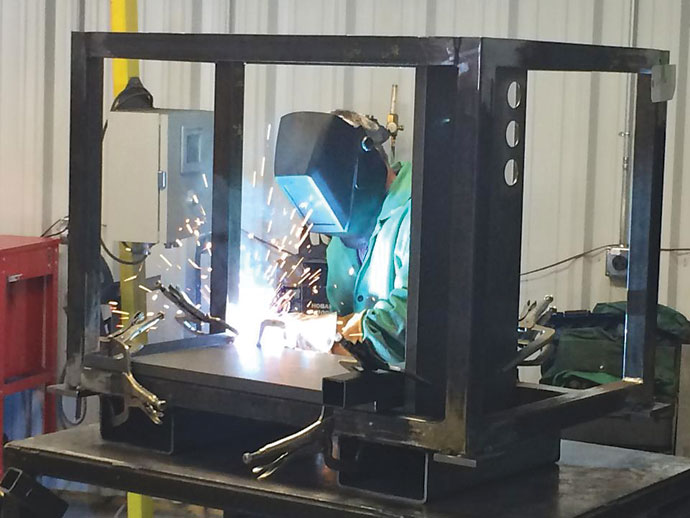 A welder works at A&P Tool, one of several companies expanding in Defiance County.
Photo courtesy of A&P Tool
by ADAM BRUNS
J

ust because a place has an industrial legacy doesn't mean that prowess is past and gone. As historically industrial areas throughout the United States are learning, the reasons companies came there in the first place still stand the test of time.

Today more than ever, Defiance County, the industrial hub of the far northwest corner of Ohio, is proving itself as efficient an economic engine as the engines its workforce has been producing for generations.

Three years ago, General Motors chose to invest $47 million in its powertrain plant in Defiance, Ohio, in order to increase component production for its Ecotec 1.4-liter engine and the next generation of small-block car and truck engines. It came one year after three separate investments totaling more than $187 million at the complex, which has been producing for GM since 1948.

Companies such as Johns Manville, Parker-Hannifin, Defiance Metal Products and A&P Tool also know Defiance County's value as a manufacturing location. Defiance Metal Products, whose corporate headquarters are located on the site of the old Turnbull Wagon Co. at the confluence of the Maumee and Auglaize rivers, operates a separate plant on the north side of Defiance as well. The company invested $2 million and added 50 jobs not long ago, and is celebrating its 75th anniversary.

They're being joined by a growing cast of investors including steel tower structure company FWT (180-plus jobs at its plant in Hicksville), Hillandale Farms, Standridge Color Corp. and Consolidated Grain and Barge, which has started up a new $23-million grain storage and shipment terminal with the capability to load out 90-car unit trains.

Pick a Lane and Go

Defiance is the commercial and industrial hub of the six-county area of far northwest Ohio, located precisely in the middle of the 80 miles between Toledo and Fort Wayne, Ind. And therein lies another advantage. 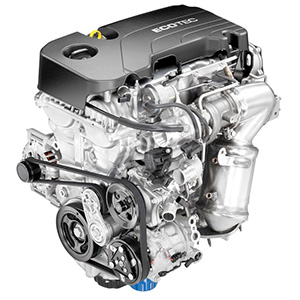 General Motors' June 2011 announcement of a $47-million investment in its powertrain plant in Defiance, Ohio, came after $274 million invested at the 60-year-old plant the previous four years. Among other products, the plant makes components for the new ultra-efficient Ecotec 1.4-liter turbo engine (above).
Photo by Shane Pequignot courtesy of General Motors

In addition to having the east-west Ohio Turnpike less than 20 miles away, the Defiance area features four interchanges with new four-lane U.S. Route 24 divided highway, the major road connecting Fort Wayne and Toledo that was officially opened just two years ago after 25 years in the works. The new highway effectively shaves 30 minutes from a two-lane trip whose previous highlights included 443 access points, too many "no passing" zones and too many wrecks.

Today, what might be just a highway to some is a breath of fresh air to many others, including employees of the dozen or so trucking firms serving the area. The new US 24 can handle approximately 2,000 passenger cars per lane per hour. The Fort Wayne-to-Toledo trip takes 74 minutes - meaning companies in Defiance County are less than 40 minutes away from either market.

For companies that require rail, Defiance County offers services from the CSX dual mainline from Chicago to the East coast ports or sites along the ND&W railway, a short-line carrier with connection to the NS system.

The incentives infrastructure is sturdy too. Numerous local incentives in the county such as tax increment financing, Enterprise Zone and Community Reinvestment are layered over those offered by the state. 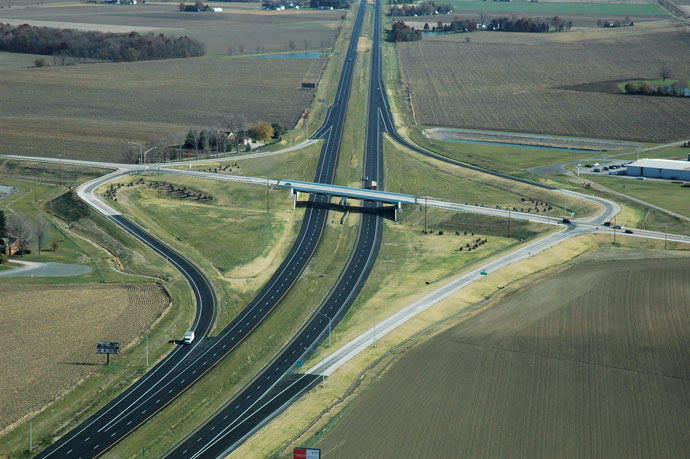 WHERE IT ALL BEGAN: The expansion of U.S. 24, referred to as the Fort to Port project, officially began in 2006 when work commenced on a 2.2-mile stretch of the roadway in Defiance County. Pictured is one of four interchanges in the city along the new highway.
Photo courtesy of Ohio DOT

The communities of Defiance, Hicksville and Sherwood offer their own menus that include revolving loan funds for business development and infrastructure, and job creation and land-for-jobs incentives. And, in addition to the presence of private liberal arts institution Defiance College, workforce development resources are immediately at hand at Northwest State Community College.

Topping it all off, Defiance County is one of five Northwest Ohio counties included in the Toledo-Lucas County Port Authority's newly expanded Free Trade Zone. The FTZ is also now reorganized under the Alternative Site Framework, which can shorten approval processes for projects from six to nine months to four to six weeks.

In Defiance, that kind of efficiency is nothing new.

This Investment Profile was prepared under the auspices of Defiance County Economic Development. For more information, contact Jerry Hayes, Executive Director, at 800-283-3342 or by email at defecon@defnet.com. On the Web, go to www.defecon.com.