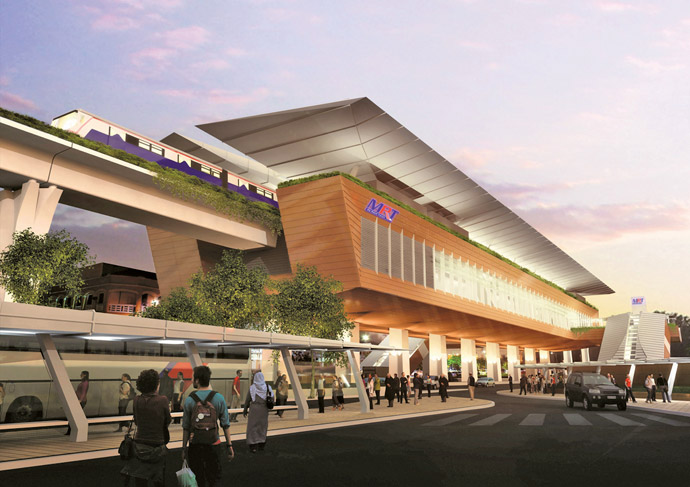 The Mass Rapid Transit first line, Sungai Buloh to Kajang, is under construction, planned for completion in 2017.
Pictured is a rendering of a new MRT station to be built.
by MARK AREND
T

he only National Key Economic Area (NKEA) in Malaysia's Economic Transformation Programme (ETP) that is not an industry sector is Greater Kuala Lumpur. This metropolitan region with a population of 7 million is expected, like 11 of its industrial NKEA counterparts, to contribute significantly to the ETP's mandate to transform Malaysia into a high-income, fully developed economy by 2020. It already contributes 30 percent of Malaysia's gross national income, to the tune of 190 billion ringgit (US$60 billion). Its contribution will be a lot more in 2020 when Greater Kuala Lumpur's population will have grown 40 percent to 10 million, as is forecast.

"That is good news, but it also poses a challenge in terms of how to prepare for that," says Zainal Amanshah, CEO of InvestKL Corporation, the capital region's chief investment promotion organization charged with attracting foreign direct investment, particularly from multinational corporations.

But challenges can be opportunities in disguise. And the challenges associated with upgrading or initiating new urban infrastructure projects over the next six years are business opportunities for global engineering and construction (E&C) companies. This is particularly true for E&C players that (1) win contracts to play a role in implementing key projects and (2) remain in Greater Kuala Lumpur after those projects are completed to service other projects taking shape elsewhere in Asia. AECOM, a leading global engineering design firm with an already significant operation in Greater Kuala Lumpur, predicts continued growth in construction and infrastructure spending in Asia.

Infrastructure was behind 37 percent of total construction spending of US$32 billion in 2013 in Asia, according to AECOM's Asia Construction Outlook 2014 report, which has this to say about Malaysia specifically: "Malaysia continues to see strong growth, especially in infrastructure as the projects related to the government's economic transformation program are implemented." AECOM forecasts 4.2 percent growth in construction spending annually through 2019, which is a higher rate of growth than is forecast for Singapore (3.8 percent), Hong Kong (2.6 percent), Korea (2.4 percent) and the Philippines (2.9 percent).

An AECOM opinion survey discussed in the report characterizes Malaysia, as well as the Philippines and Indonesia, as being "at the forefront of respondents' views regarding market growth in the region over the next 12 months. Respondents have become more pessimistic regarding near-term market growth prospects in India, Singapore and Thailand." Malaysia is also cited as a country that respondents expect to become increasingly attractive to foreign suppliers of construction services in the next 12 months.

Greater Kuala Lumpur is the logical location for companies to establish permanent and expanding regional operations.

These trends are good news for Malaysia, for Greater Kuala Lumpur particularly, where several major public infrastructure projects are now under way or soon will be as part of the region's NKEA status, and for engineering and construction firms that are in Greater Kuala Lumpur now or are considering opening operations there. These projects include:

River of Life: Five new developments will take shape across 11 precincts along the Klang River as part of an initiative to reclaim Kuala Lumpur's river and make it a central redevelopment amenity.
Image courtesy of Invest KL Corp.

"We are already at 40 percent of that goal," says Zainal of InvestKL. "I've always wanted to get to the half-way mark as quickly as possible, because along the way we create success stories, but we also learn. This is a new chapter. The old offerings we have are still applicable, but business is changing and models are changing. We are adapting and accommodating what the multinationals want so we can create a real win-win scenario."

" Malaysia continues to see strong growth, especially in infrastructure as the projects related to the government's economic transformation program are implemented."

What the multinationals want, says Zainal, is not just incentives but an ecosystem that supports their growth in the region, particularly with respect to talent availability both within Malaysia and externally as Malaysian knowledge workers living abroad recognize opportunities back home and return to take advantage of them. "When we talk about oil & gas, engineering & construction, supply chain - any sector - the availability of a strong, supportive ecosystem is important. Enablers of the ecosystem include talent availability, connectivity and the ports. Our immigration agency has set up a new expatriate services division, called ESD. An employment pass application now takes just five days for approval, which used to take 30 days. This is a brand new program that illustrates improvements to the talent ecosystem for multinationals."

A Returning Experts Programme has been established to attract native workers overseas back to Malaysia, where for five years, they would pay only 15 percent tax. This lures home the expertise required by investors in Malaysia's R&D, engineering and construction and oil and gas sectors, among others.

Repatriating Malaysian professionals, multinationals and Greater Kuala Lumpur residents are seeing new levels of connectivity take shape from the infrastructure projects mentioned above to KLIA 2 - the recently opened Low Cost Carrier terminal at Kuala Lumpur International Airport. "Combined, I believe KLIA 1 and 2 will handle about 50 million passengers per year, which is comparable to other airports in the region," says Zainal. "There is a lot of activity going on, and this is good news for 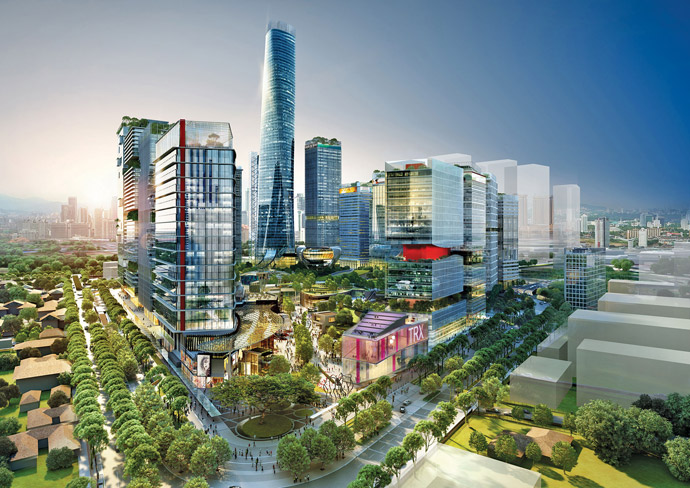 multinationals, who see that Malaysia is only a 30-million population market but, there is so much going on." That, adds Zainal, is the impetus for such enterprises to consider Greater Kuala Lumpur as their regional base of operations.

No Shortage of Construction Work

Greater Kuala Lumpur's infrastructure projects are where engineering and construction enterprises will find their anchor assignments, at least those not yet affiliated with construction of what will be Malaysia's tallest building - Warisan Merdeka, or KL118 Tower due to its planned 118 stories, which is now under construction adjacent to two stadiums in central Kuala Lumpur. The 400,000-square-meter project, which is managed by Turner International, will include residential, office and hotel space and will easily surpass the city's iconic Petronas Towers in height. KONE Corp., based in Finland, announced in June that it will supply 105 elevators and escalators to the project, which is slated for completion in 2019. Twelve of the elevators to be installed have a travel speed of 10 meters per second.

Site preparation work began in spring 2014 on 1Malaysia Development Berhad's Tun Razak Exchange (TRX) project in Kuala Lumpur (above) - the centerpiece of a new global financial services district that will join the Malaysian capital's growing list of iconic places. Launched in 2012, TRX is a key step towards the goals of the Government's Economic Transformation Programme to turn Malaysia into a high-income economy by 2020.

The rail and river revitalization projects are where the engineering and construction companies are establishing their roots in the region, says Zainal, who refers to the KL-Singapore high-speed rail service as a "game changer". The final stages of the project are being worked out, which takes time, given the cost involved. Estimates are in the neighborhood of 40 billion to 50 billion ringgit, or about $15 billion, he notes. "It's likely to be a public-private partnership. Final bid, location details, and so forth are to be announced, but many of the engineering & construction players are looking at this project and following it intensely, because this is a major opportunity for them. The first part of the project was to be online by 2020. But the decision needs to be made some time now because it is a very long-term project and very complex, involving land clearing and other complex steps."

The first line of the Mass Rapid Transit project is to be complete in 2017, with two more to follow. "A number of players that were involved in this project selected 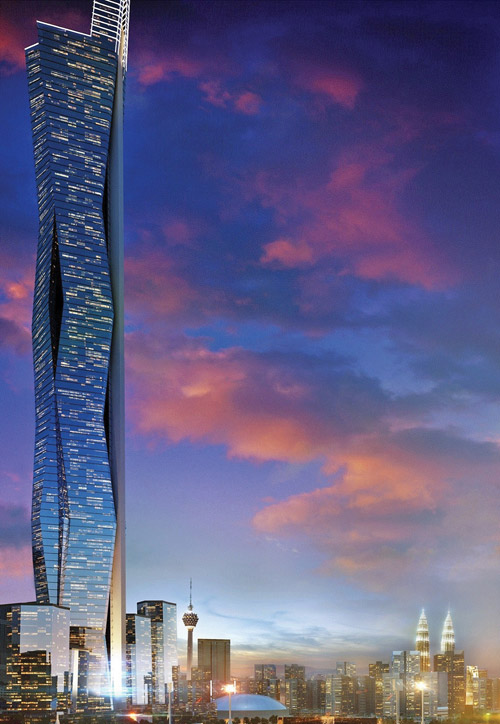 The KL118 Tower, scheduled for completion in 2019, will add new heights to Kuala Lumpur's already iconic skyline.Greater Kuala Lumpur to be a regional hub in one way or another," says Zainal. "A regional hub can be a center of excellence, shared services, an operational headquarters - there can be many forms of a regional hub. AECOM was involved in the initial stages, as was COLAS Rail, a French company. Two other lines are being planned, but the routes and so forth have not yet been revealed. But you can see the amount of opportunities for multinationals to come and participate in these projects. And we know that some of them at the same time are eyeing other state development projects in the region. We believe this is a good base for them."

AECOM also is coordinating the River of Life project that incorporates five sub-developments, one of which is a Transit Hub, and 11 precincts. This initiative will go a long way toward enhancing Greater Kuala Lumpur's livability (it aspires to be at or near the top of lists of cities known for that quality) and will take shape in conjunction with the green initiatives and focus on iconic places.

ETP goals within the context of Greater Kuala Lumpur must be achieved in just six years, and that will happen in most if not all cases. That does not mean the book is finished in 2020. It's on to another chapter in the same book, which is all about why Greater Kuala Lumpur is the logical location for companies to establish permanent and expanding regional operations.

"Companies will want to stay," says Zainal, "not leave after the projects are completed."

This Investment Profile was prepared under the auspices of InvestKL Corporation. For more information, visit www.investkl.com or email info@investkl.gov.my.