Invited to see Northwest Ohio for themselves, some recent visitors experienced a paradigm shift. 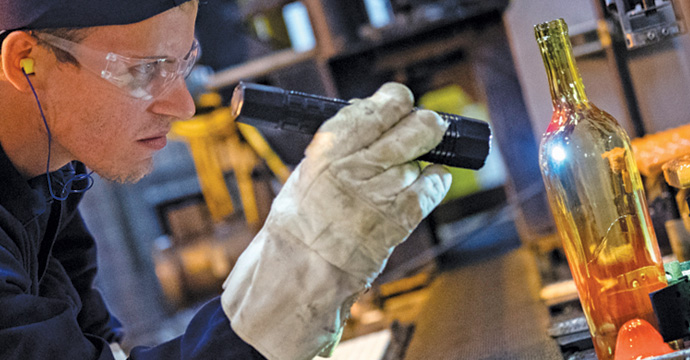 A worker inspects glass bottles coming off a pilot line at the new Innovation Center opened by Owens-Illinois at its global headquarters in Perrysburg in June.
Photo courtesy of Owens-Illinois
by ADAM BRUNS
A

group of site selection consultants took a summer-school course on Northwest Ohio this year, just five days after the world's largest glass container manufacturer, Owens-Illinois, celebrated the opening of its Innovation Center in the Toledo-area community of Perrysburg.

"Innovation is a key component of our long-term strategy," said Owens-Illinois President and CEO Al Stroucken.

But we'll let the consultants, fresh from their visit, say it themselves.

Tim Feemster, managing principal of Dallas-based Foremost Quality Logistics, points to the progress made by the Toledo-Lucas County Port Authority on its 100,000-sq.-ft. spec building near the Jeep plant along I-75: "Once the facility is nearing completion, it opens up the area to the opportunity to satisfy a new entrant to the market with a short lead time requirement rather than a long-term build-to-suit-only option," he says.

The new site rests like a jewel in the ideal logistics setting, with major air, road, water and rail assets in close proximity.

"Having all four modes of transportation within an hour of a potential site definitely is a plus for the region," says Feemster, and not just for moving cargo. "Most folks thinking about the area probably forget about Detroit's airport since it is in Michigan, but it is an international airport that could easily serve international companies with daily flights to Europe, South America, and Asia." 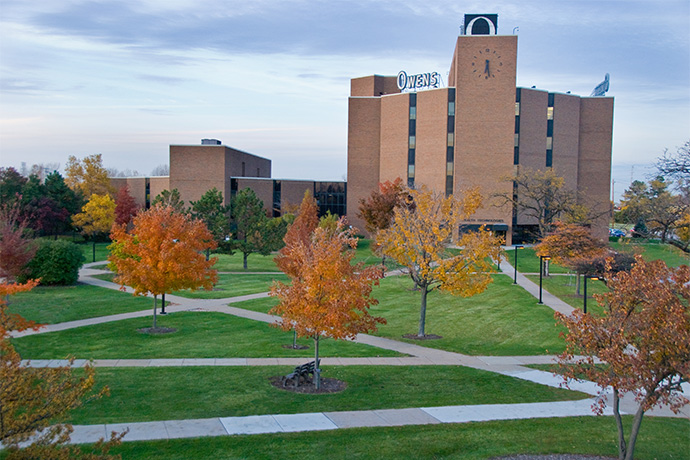 It already does, for such globally connected Greater Toledo-based corporations as Owens Corning, Marathon Petroleum (in Findlay), Libbey, KeyBank, Chrysler, GM, First Solar and Dana, as well as Rudolph-Libbe, SSOE, and Plante Moran.

Of the $968 million in capital investments across the state that JobsOhio and its regional partners like RGP worked to secure during the second quarter of 2014 from 73 companies, $492 million was committed to Northwest Ohio, bringing with it commitments of 1,256 new jobs and 4,977 retained jobs.

Feemster would like to see the city's K-12 graduation rates go up. He also notes the non-right-to-work status of Ohio as a state, but in the same breath says one of the most striking things he noted during the visit was the "growing number of non-union operations in traditionally union sectors."

But at least one outside observer says there's already promising evidence of those connections in the region - and at a much earlier stage.

"It's abundantly evident that a lack of skilled manufacturing employees exists in the US," says Benton Blaine, a tax expert at EY. "I think Northwest Ohio - community colleges, local government, RGP - is taking proactive steps to minimize the problem and turn it into an advantage. I think this is an issue the US will face for decades to come," says Blaine, "but one that Northwest Ohio will deal with in short order."

It seems major employers already are taking note: This year the area's largest employer, healthcare firm ProMedica, announced it's considering moving 700 employees to a new downtown headquarters to be located in part of the KeyBank building and at the historic steam plant complex once operated by Toledo Edison. The Triple-A baseball club Toledo Mud Hens, who opened Fifth Third Field downtown in 2002, are investing in a $21-million plan to renovate historic buildings adjacent to the stadium for a mixed-use development. And construction contractor Lathrop Co. has indicated it will move its 50-employee headquarters downtown by early 2015. 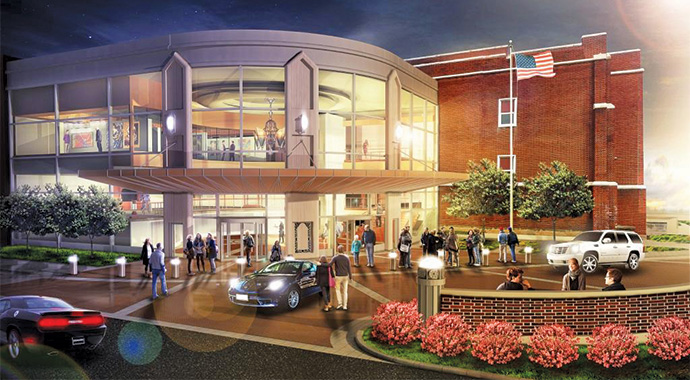 In addition to an ongoing expansion of its downtown corporate offices, Marathon Petroleum’s hometown investments in Findlay include backing the forthcoming $10-million Marathon Performing Arts Center (above).
Image courtesy of MPC

But in-town development and redevelopment is by no means restricted to Toledo.

Marathon Petroleum has been a bedrock presence in Findlay, Ohio, part of the Toledo metro area, for more than 125 years, and employs more than 1,800 people in the area. A new multi-year $80-million project to expand and enhance its corporate offices will further reinforce Marathon's commitment. MPC will further its commitment by making a $1.1-million donation to Findlay City Schools.

"Since 2011, we have grown by more than 200 employees at our corporate headquarters," said Gary R. Heminger, MPC's president and CEO and a Findlay native. "When completed, we will have an exceptional campus that will meet the needs of our business for years to come."