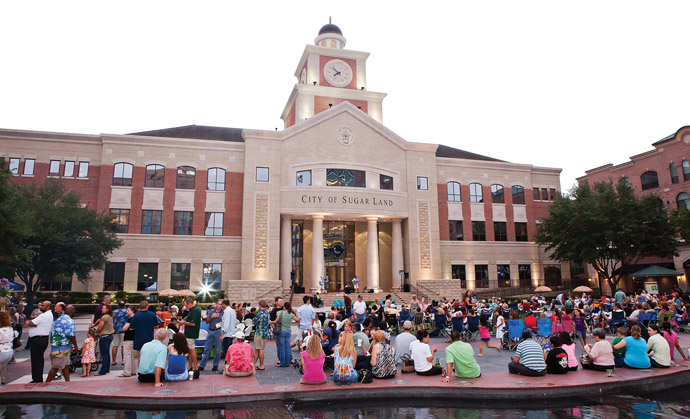 hoever wrote the song "Home Sweet Home" must have had Sugar Land in mind.

The city of 85,000 people 20 miles southwest of Houston is mixing business with pleasure and leaving the sweet taste of success on the lips of those who try it.

From the Fluor Corp. and Texas Instruments to Minute Maid and Schlumberger, big business is making hay in the land built by big sugar.

Founded in Fort Bend County as a sugar plantation in the mid-1800s, Sugar Land morphed into a company town around 1908 and flourished to a population of 2,259 through its official incorporation into a city in 1959.

Today, it stands as the crown jewel of suburban Houston, gleaming with multiple corporate headquarters facilities, giant engineering R&D centers, and a highly skilled workforce that is the envy of most other communities its size. With an average household income of $138,831, Sugar Land ranks as one of the most affluent and fastest-growing cities in Texas.

Much of this growth is driven by the rapidly expanding corporate entities that call Sugar Land home. Texas Instruments cut the ribbon July 23 on its new 160,000-sq.-ft. R&D center in the city. 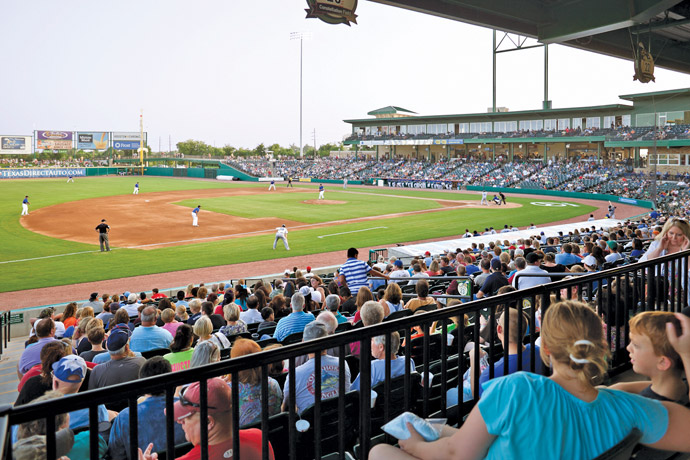 Constellation Field, home of the Sugar Land Skeeters, is an award-winning minor league baseball stadium that rests on land that once belonged to Imperial Sugar. The ballpark's inaugural Opening Day was April 26, 2012.
Photo by Carl Mayfield

"We're proud to call Sugar Land our new home," says Curt Moore, TI Sugar Land site leader. "The collaboration between TI, city dignitaries and all those involved in the planning and development of our new facility has truly made us feel like a part of the community. Throughout the last five decades, TI Houston sites have been home to some of TI's most significant technological breakthroughs and we look forward to the opportunities Sugar Land will bring."

The 7-acre site at U.S. Highway 59 and University Boulevard will employ 375 people. The staff relocated from a 45-year-old TI site about 5 miles away in Stafford.

"TI's commitment to create more than $35 million in new capital investment represents a significant contribution to our economy," Sugar Land Mayor James Thompson said. The city was instrumental in facilitating the deal, contributing an incentive package consisting of a tax abatement and direct incentive.

Thompson, who's now in his fourth term as mayor, says his long-range goal is to make Sugar Land a "destination city" for high-end employers and their talented workers.

"We have evolved from a company town into a series of master-planned communities and now into a full-fledged, fully functioning city," Thompson tells Site Selection. "We are defined today by our strong relationships with our business community, our abundant amenities, and our thriving town center."

" People ask me if Sugar Land has made the transition from bedroom community to employment center. I believe we are already there."

The 11-year-old Sugar Land Town Square - a 32-acre complex with over 800,000 sq. ft. of office and retail space - is home to City Hall, a luxury Marriott Hotel, and a host of high-end retailers and restaurants. It serves as the foundation stone of Sugar Land's destination and branding strategy. In fact, it's what sets it apart from all other Houston suburbs and perhaps even Houston itself.

"Our message to businesses is that, number one, we will be a facilitator. We will designate one person at City Hall to be your primary contact for all of your business expansion and permitting needs," says Thompson. "We understand that time is money. Secondly, the infrastructure that you need to effectively and efficiently run your business is here. Thirdly, we are very affordable. We have low tax rates and some of the most affordable housing in the country. Fourthly, we have unparalleled amenities. And fifthly, we have a strong educational system, both K-12 and post-secondary. The University of Houston has a campus here, and they produce outstanding graduates who enter our workforce."

These factors make Sugar Land a natural fit for corporate and regional headquarters operations, engineering support for the computer and oil and gas industries, health-care companies, and a bevy of technical trades and advanced manufacturing sectors. UnitedHealthcare, Noble Drilling Services and Bechtel EO are just a few of the scores of large, global firms that call Sugar Land home.

"People ask me if Sugar Land has made the transition from bedroom community to employment center," Thompson says. "I believe we are already there."

Dan Spinks, general manager of Fluor Corp. in Sugar Land, says that Fluor is so sold on Sugar Land that it plans to build a brand-new, 1-million-sq.-ft. campus on a 50-acre site in the city within seven years. Up to 3,000 employees could be based there. 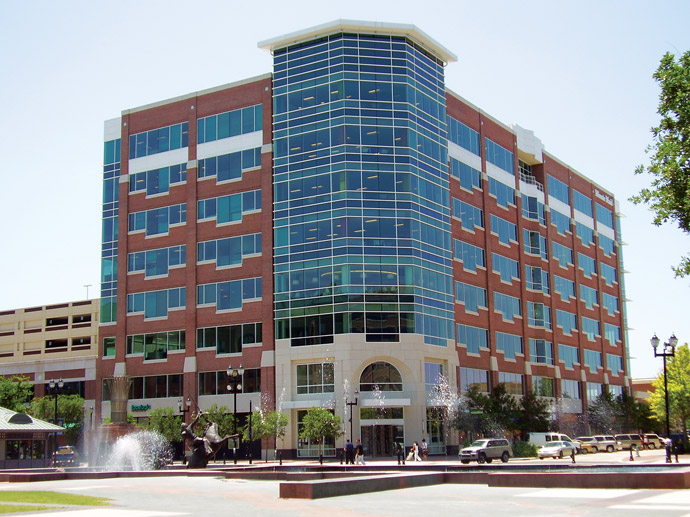 Minute Maid opened its new corporate headquarters in the Sugar Land Town Square in February of 2009. The company relocated from Houston into 115,000 sq. ft. of leased office space developed by Planned Community Developers Ltd. Minute Maid benefited from an aggressive tax abatement on real property improvements and a direct incentive to relocate from the Galleria area, where it had been for 25 years.

Fluor has maintained a presence in Sugar Land since 1984 on a 300-acre tract that houses more than 2,000 employees in 1.2 million sq. ft. The only problem, says Spinks, is that this space no longer meets their needs.

"We have a long, rich history of working with the city, and that was the key factor in our wanting to remain here," Spinks says. "When our existing lease expires in seven years, we plan to move into our new campus nearby."

"We looked at other submarkets around Houston - places like The Woodlands and the Energy Corridor - but we found that Sugar Land made the most sense for Fluor," he says. "A large percentage of engineers live on this side of Houston. Plus, the city of Sugar Land has done a good job of zoning and maintaining and enforcing its architectural requirements. This city manages growth well."

That is by design, the mayor notes. "We are a zoned city," says Thompson. "A local developer came up with the town square vision for Sugar Land. Our model was Reston, Virginia. We created a tax increment reinvestment zone. We secured a developer for the Marriott, and we own the conference center. I like to tell people that we are a large city with a small-town feel."

A Magnet for Oil & Gas Firms

Bob Dompke, director of facilities and real estate for Nalco Champion, says the oil and gas specialty chemical company considered locations in and around the Houston area before deciding to invest $45-million in a new 133,000-sq.-ft. facility and R&D improvements in Sugar Land.

Located near the original Imperial Sugar site along US 90A, the new facility will bring more than 1,000 employees from the company's Houston and Fresno locations to Sugar Land.

" We have had a 100 percent retention rate on office space renewals in Sugar Land Town Square. Once a company establishes a presence here, they don't want to leave."

"It made the most sense to get everything back to Sugar Land," says Dompke. "Having the technical team, sales force and marketing people all in one location was the right solution for our company. It enables us to talk and share ideas and, most important, solve our customers' problems."

A number of factors make Sugar Land the best location for Nalco Champion, says Dompke. "The transportation network is very good here," he says. "We have rail access right at our front door. There are a lot of worker training resources, and the city is very proactive. They asked us, what are your needs? The city really seeks out what employers are looking for in a community."

Dompke notes that Nalco Champion is in a position to expand again. "We have the capacity to add another 40,000 square feet to the building once it is completed," he says. "The bottom line is that the Greater Houston area is the energy capital of the US. Why would we look anywhere else?"

TEAM Industrial, another firm servicing the oil and gas industry, moved its corporate headquarters and 80 people from Alvin to Sugar Land in January of 2012. 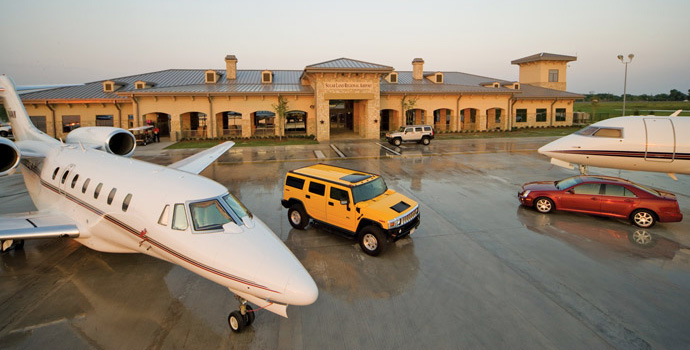 Sugar Land Regional Airport, home to Global Select - consistently ranked one of the top FBOs in the Americas, has its own US Customs office and serves a variety of corporate aircraft.
Photo by Jerry Hebert

"We outgrew our space in Alvin, and Alvin is not on a major thoroughfare," he says. "We just felt comfortable in Sugar Land. This is a nice combination of a bedroom community with very high-class professional amenities and services. Plus, it had plenty of available properties and it is easy to get here."

Bleasdell says it was a pleasure to work with the city of Sugar Land on the deal. "They (the city) bent over backwards to help us," he says. "We now occupy 26,000 square feet in the Granite Towers. Up to 120 people will work here eventually."

He adds that "the incentives from Sugar Land tipped the scales. Houston did not offer us an incentive to move there. Sugar Land was a better deal economically."

A Russell 2000 Index company, TEAM is growing its business at an annual rate of 20 percent, notes Bleasdell. "Our people are critical. They are our most important asset," he says. "Being located in Sugar Land enables them to achieve life-work balance. It has made a difference for our company."

That's music to the ears of Mayor Thompson. "I have been very active in business recruitment and business retention," he notes. "I have lunch with our local CEOs to find out what's on their minds and see what they need. That's one reason we created a business plan for the Sugar Land Regional Airport. Our real focus now is on corporate aviation. We have our own US Customs office. We have a very diverse community, and we always have to be working hard on making sure that we are delivering what our businesses need in order to thrive."

The Sugar Land Town Square is evidence of that, the mayor says. "It has attracted over $255 million in investment and has won major awards from the Houston Business Journal and was a finalist for the Urban Land Institute's Development of Distinction Award. We entertain visitors weekly from around the state and nation. They want to come here just to see what we have built and learn from our success," he says. "Our excellent minor league baseball stadium - Constellation Field, home of the Sugar Land Skeeters - is also the envy of minor league cities around the country. It is looked at nationally as one of the best baseball parks in America."

Thompson says the city's sales pitch to corporate executives is pretty simple: "If we can get them here, we know we can sell them and keep them here."

This Investment Profile was prepared under the auspices of the City of Sugar Land, Texas. For more information, contact Jennifer May, Director of Economic Development, at 281-275-2229 or by email at jmay@sugarlandtx.gov.