The McCrory Administration and top state business recruiters are more than fluent in the language of business and commerce. 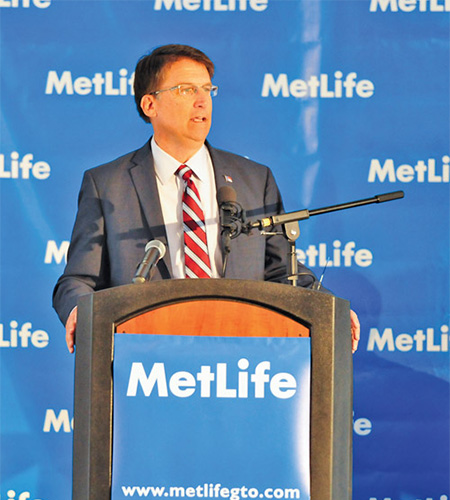 MetLife will create 2,600 jobs in Charlotte and Cary by the end of 2015 when it opens its new Mecklenburg and Wake County campuses. “We’re proud that a strong corporate partner like MetLife has decided to invest in North Carolina,” Gov. McCrory said at the March 2013 announcement. “These jobs will complement our financial services sector in Charlotte and our high-tech hub in Wake County, two distinct sectors we want to expand.”
Photo Courtesy of the Office of the Governor
G

overnor Pat McCrory will not let the Tar Heel State rest on its laurels, which are numerous, as its performance in state competitiveness rankings in this publication over the past decade demonstrate. North Carolina has excelled in Site Selection’s annual Business Climate Rankings for the past decade and regularly appears in its Top Ten Competitive States and Governor’s Cup measures of state economic development success.

The governor’s interview with Site Selection Editor in Chief Mark Arend on August 8th reveals several items that should resonate loudly with potential investors and competitive states alike, the chief one being this: North Carolina’s chief executive and his economic development team speak the language of the business world quite fluently, and they are applying that skill to business recruitment opportunities wherever they exist, but chiefly to the state’s existing businesses, who know a good thing when they have it.

Gov. McCrory took office in January 2013 and wasted no time putting his stamp on the state’s political and business climates. A new, controversial voter photo ID law, for example, will require the same level of voter identification most other states have long required, making elections in North Carolina less susceptible to fraud. And tax reform signed into law in 2013 could, if all goes well, put North Carolina on a trajectory to having the lowest corporate income tax in the Southeast.

Following are excerpts of the governor’s interview with Site Selection.

Site Selection: With respect to your tax reform plan, a reduction from 6 percent today to a 5-percent corporate tax rate in 2015 would make North Carolina the lowest in the Southeast, a tie with South Carolina and Mississippi. Then 4 percent in 2016 and 3 percent in 2017 would put North Carolina in a class by itself in the region. Would other taxes have to increase, such as property tax, for this to happen?

Gov. McCrory: I’m doing this in a systematic, strategic way whereby if it meets certain benchmarks as far as revenue coming in, reform will go further, but not until it meets those benchmarks. We’re trying to not make the mistake of too rapid a pace of tax reform while impacting the revenue coming in, which could affect other basic needs of government. So it’s a more strategic approach to tax reform, especially since we have not had tax reform in over 80 years.

Gov. McCrory: It already is. The fact is, we had the highest income tax in the Southeast, and we had a very high corporate tax in comparison to our competing states. We are finding they primarily are the other Sunbelt states. I call it lowering the productivity tax. I want to reward those industries that make and build things and grow and innovate. We recognize we can’t live off the service industry alone. So rather than dramatically change one tax for another one, I will be measuring the impact of those tax reductions on other areas. We did increase some service taxes as a result of our income tax reduction, so it wouldn’t be a total net loss. For example, you’ll pay 50 cents more to go to a movie. But we were taxing popcorn anyway. Newspapers now carry a sales tax, which had been exempted. So we closed some loopholes in order to have a consistent tax system and reduce the impact on industries’ productivity.

Gov. McCrory: We’re privatizing primarily the marketing function. It will be much more nimble and quick in its decision making and implementation. I want to emphasize that we are going to put as much or even more emphasis on recruitment of existing businesses as we do recruiting new businesses in from outside. I firmly believe you get more bang for your dollar getting existing business to grow as compared to putting all your efforts into getting outside businesses to come to North Carolina. It’s the same way in the business world. You want to keep and grow your existing customers. We know they’re happy here, we want them to expand. Their prospects for success will be greater because they already have the infrastructure and talent investment in North Carolina.

One initiative that’s quite unique is fiscal assessments of several different economic development sectors. Instead of just taking whoever expresses interest in North Carolina, we’re looking at the sustainability of each industry and their growth potential. We’ve done a statistical analysis of all industries, from biotech to software to manufacturing to agriculture, and we’ve done assessments of where each of those industries best fit North Carolina and which are better to target for growth. We have 10 targeted clusters now … manufacturing, research and educations, military — which is a big one — agriculture, biopharma, business, tourism, IT, transportation and energy generation. We’ve done an assessment of energy clusters as opposed to winging it and taking anything that comes through the door and treating it all the same. That’s not smart for business and it’s not smart for a state either.

On the topic of energy, we just got permission from the Obama Administration to do seismic testing off the Atlantic Coast to see what gas and oil exploration potential there is. No tests have been done in 25 years, so I want to examine the possibility of getting in that business off-coast. In addition, we’re looking at gas exploration inland. And we’ll hopefully do some test wells in the Sand Hills [central] part of the state.

SS: Job Development Investment Grants (JDIG) and the One North Carolina Fund are two of NC’s signature incentive programs. Do you anticipate efforts to alter or improve them, or others, during your administration?

Gov. McCrory: The major lesson learned with those is to apply them to the statistical assessment of our 10 core areas. Instead of just giving out JDIGs carte blanche, we can be much more strategic in how we award them. And we’re treating each region of the state differently and trying to adapt [incentives] to their niches.

SS: Site Selection has routinely named North Carolina the state with the best business climate, and it always scores high in our competitiveness rankings. What are your plans for continuing and building on that momentum?

Gov. McCrory: We’re not going to live off our past brand or success. Every state, including North Carolina, has to constantly reinvent itself and adapt to the new markets. We’re not going to get comfortable with our success, just like no company should get comfortable with its success, because competition is getting extremely tough, and I know my competition is not standing still. So I can’t just live off our great quality of life and our great choices in housing and education and talent. We also have to look at how we’re more strategic in our recruitment effort and how we spend more time growing our existing customers.

“We’re doing just what a company would do — not getting too comfortable with what we’ve done in the past and always looking to the future.”

We really plan to put an emphasis on military talent. In fact I just left a meeting at Camp Lejeune Marine Corps Base. I’m setting up processes with every commander at each of our military bases on how we can welcome home the forces from Afghanistan and Iraq and get them into jobs in North Carolina, not only because it’s the right thing to do, but also because we’re going to use them as a recruitment tool. Companies are looking for technical talent, leadership talent, management talent and basic maturity of workforce. I believe we have the third highest military population in the United States. Well, a lot of those military personnel are coming home now and leaving the military and they are a recruitment tool for all industries. It’s a win-win.

SS: It sounds like you intend to speak to businesses in their own language.

Gov. McCrory: I come from business and my team comes from business. My Commerce Secretary, Sharon Decker, remains on two boards of directors. She ran her own manufacturing business and she and I used to work together at Duke Energy. I believe I have the best commerce secretary in the nation — there’s no better salesperson for the state than her. She’s working closely with my transportation team, with my military adviser, my Secretary of Environmental and Natural Resources, Tom Skvarla. We’ve reviewed all regulations so that if someone needs an answer on a regulation, we want a response out in 24 to 48 hours — we’re going to give them an answer one way or another. It’s about giving businesses the answer and a way to resolve issues. Even my Cultural and Arts Secretary is part of my economic development team. It’s not just in one silo of Commerce.

SS: Businesses want predictability when they are planning for the future, especially with respect to location selection. What can North Carolina offer along those lines?

Gov. McCrory: That’s one reason we’re doing tax reform. Some states are putting too much emphasis on one-time tax incentives versus a long-term tax plan. Those are the choices we have to make, including business. You’re getting a better long-term return on your investment. I want to talk right to the CEO and boards of directors and make the pitch for North Carolina. It’s an easy sell — available talent, quality of life, tax structure and education. We sell our universities and technical colleges, too. We’re making sure our community colleges are training right on site for job training at the manufacturing plants.

We’ll be initiating a new branding initiative in economic development in the next few months. We’re doing just what a company would do — not getting too comfortable with what we’ve done in the past and always looking to the future.

We celebrate our successes but then move on very quickly. We don’t take it for granted.