Foreign direct investors are behind much of the Commonwealth’s surge in new jobs in 2014. 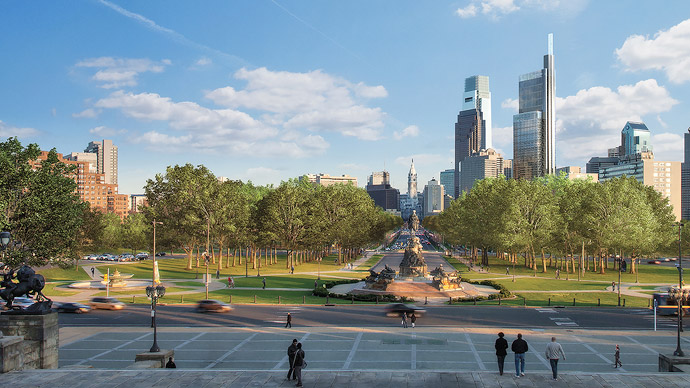 April, in fact, was a very strong month, as Pennsylvania was the only state in the Northeast to add more than 10,000 jobs that month.

"Employment growth [for the state] has been accelerating since the start of the year and the mix of jobs has improved," says Ryan Sweet, an economist for Moody's Analytics. "High-wage industries have accounted for the bulk of the net job gains. That's a noticeable shift from the past several years when low-paying industries were the primary driver," Sweet explained.

" We are a different company than we were a few years ago. We are competing for talent all over the world, and we have to offer something special."

Many of the flagship projects are coming from overseas. Pennsylvania was one of only three states to post positive growth in foreign direct investment in 2013 over 2012, according to the Financial Times. And 2014 is shaping up as another year of accelerating growth, according to the state's Department of Community and Economic Development (DCED). Here are a few examples of recent recruits:

"Another important key to our success is Pennsylvania's proximity to key North American markets," Muskens says. "We're within a long day's drive of 60 percent of the US and Canadian populations. We have a skilled workforce, low-cost and less volatile electricity and abundant water resources."

OBID, a division within the Department of Community and Economic Development, is responsible for contributing to the growth and strength of the commonwealth's economy by attracting foreign investment to the state and providing value-added international trade services to Pennsylvania's businesses and ports.

" We're within a long day's drive of 60 percent of the US and Canadian populations. We have a skilled workforce, low-cost and less volatile electricity and abundant water resources."

Additional trends identified by Moody's Analytics include the emergence of e-commerce as an important economic driver in Central Pennsylvania. In Lancaster County, fulfillment centers under construction for Forever 21, Nordstrom and Urban Outfitters are projected to employ up to 3,000 people in the coming years, likely creating opportunities that will spill over into nearby counties such as York and Reading, says economist Adam Kamins. Harrisburg, he notes, is already home to an Amazon fulfillment center (as is Allentown).

Natural gas exploration in the Marcellus Shale is giving a significant boost to Williamsport's economy. Its metro area is outperforming the state and the US, and prospects for future drilling are bright, Kamins says.

'Something Special' in Philly

Philadelphia, the state's largest metro area, continues to score large-scale construction projects to meet the needs of office tenants. In University City - home to the University of Pennsylvania, Drexel University, the University City Science Center and the Children's Hospital of Pennsylvania - groundbreaking for the 49-story, 861,000-sq.-ft. (79,987-sq.-m.) FMC Tower took place in May. The building will contain 268 luxury apartments in addition to serving as the chemical company's global headquarters.

An adjacent 33-story tower, known as Evo, will contain upscale housing and amenities for graduate students and young professionals. Brandywine Realty Trust is developing both projects. They cap Brandywine's pioneering 2.7-million-sq.-ft. (250,830-sq.-m.) mixed-use development along the western bank of the Schuylkill River.

In July, Liberty Property Trust started construction on the Comcast Innovation and Technology Center, a $1.3-billion mixed-use glass tower that will be the tallest building in Philadelphia and the tallest skyscraper outside of New York City and Chicago when it opens in 2018. Comcast has signed a 20-year lease for 75 percent of the building's office space. A 222-room Four Seasons Hotel will occupy the top floors.

Brian Roberts, chairman and CEO of Comcast, said his goal is to create a "vertical urban campus" that can compete with Google or Facebook suburban-style headquarters space. Instead of offices, the building will be mostly broken into lofts to meet the needs of Comcast's tech-savvy workforce.

"We are a different company than we were a few years ago," said Roberts at the official groundbreaking ceremony. "We are competing for talent all over the world, and we have to offer something special."

In suburban Philadelphia, the region's biggest fixer-up project is taking place in Malvern, Chester County, the epi-center of greater Philadelphia's biotech and technology corridor. Saint-Gobain, the French construction and building materials maker that traces its history back to the construction of Versailles (it celebrates its 350th anniversary next year), has master-planned the 65-acre (26-hectare) corporate campus with developer Eli Kahn and J. Loew Associates, both of Downingtown, in collaboration with Aegon Realty Advisors.

The former dated headquarters of the Aegon Group will be transformed into a LEED-certified building for Saint Gobain and its North American construction materials subsidiary, CertainTeed Corp. More than 800 employees will occupy the leased 320,000 sq. ft. (29,728 sq. m.) of office and research space. The firms will use their own construction materials for the project.

Like Roberts, John Crowe, who oversees the US operations of the world's largest building materials firm, wants to create an architecturally exciting workplace that will appeal to today's millenials and is "energy efficient, has superior air quality and moisture management, and makes a material difference in the comfort and health of employees."