Put That Brownfield
To Work

Based on a partnership with Chevron, a California-based firm helps companies and communities turn mountains of garbage into fields of wattage.

Hikari-no-Mori, or “Forest of Light,” is a mega-solar project of 36,000 solar panels built on top of a landfill on the man-made island of Yumeshima near Osaka and managed by Sumitomo Corp.
Photo courtesy of Nissan
by ADAM BRUNS
P

Some corporate real estate directors might read that sentence and laugh, thinking it applies to everything that comes across their desks these days.

But the statement, taken from a presentation earlier this year given by Robert Potter, project scientist at Project Navigator, is referring to a very specific idea and potentially elegant solution for many of those frazzled corporate real estate leaders: solar power on top of contaminated property.

If there's one challenge nearly universal in global corporate real estate, it's asset disposition and reuse. There's nothing more challenging to reuse than a remediated brownfield or landfill site - sometimes because of conflicts with company environmental leaders, who simply want it cleaned up and left alone.

Those same companies, however, are also on the hunt for on-site power generation opportunities, especially if fired by renewables. Enter Project Navigator, a California-based firm known for working with major industrial multinationals at sites around the world on property remediation, and the administrator of, among other things, the water quality monitoring in Hinkley, Calif., famously depicted in the film "Erin Brockovich."

Based on a successful partnership with Chevron that examined solar power potential at some 600 Chevron sites around the world, the firm's PVNavigator (PVN) subsidiary is just beginning to tackle the enormous opportunity for solar power development on public and private landfills and brownfields otherwise deemed unusable. 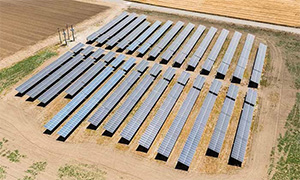 In the first year of operation, a 792-kW solar system installed on a block of fallow, unusable land at fruit and vegetable grower Uesugi Farms in California generated over $100,000 in savings and has offset the farm's electric bill by more than 90 percent.
Photo courtesy of Vista Solar

In July, Project Navigator entered into a Power Purchase Agreement (PPA) with Southern California Edison for a 3-MW solar photovoltaic (PV) facility to be located on the County of San Bernardino's closed Milliken Sanitary Landfill located in Ontario, Calif. The power generated from the facility will be sold under the terms of the PPA for a period of 20 years.

PVN currently has about 50 MW of site capacity under option, and more than 300 MW in the overall pipeline.

The main strength of the strategy is this: While large-scale solar power farms face permitting, financing and interconnect challenges at greenfield sites, that is not the case for urban landfill or brownfield sites, which usually are near existing power distribution infrastructure as well as nearby load, thus saving major costs involved with installing new transmission lines. Not only do such projects face minimal permitting requirements by virtue of their location on brownfield or federal Superfund sites, they also help states meet renewable power goals.

Project Navigator President Ian Webster says the solar PV idea came about in 2007, as the firm looked to diversify its business. Several projects moved forward in California, as did one at an Owens Corning landfill site in New Jersey.

There are more than 400,000 officially identified brownfield sites in the United States, comprising 16 million acres available for renewable energy development.

Webster says the firm is aiming to work with a few other industrial clients in the LA Basin whose Class 2 landfills, which have accepted hazardous waste, are "like aircraft carriers that nothing else could land on the surface of. We're trying to convince the PRPs [potentially responsible parties] that this is the highest and best use of the land." Remedies of these former industrial waste sites require things such as water pumping, so solar power can help "green" the remedy, he says.

Waste cell sites at refineries in California and the Northeast might also be good candidates for PV installations. Webster says he tried to make headway with a solar solution on an old Ford Motor Co. landfill site, but the upper Midwest utility that would have been the offtaker was not up to the challenge.

Central to the PVN premise will be a change in perception and outlook from corporate departments themselves. For years, says Webster, real estate and environmental remediation departments have lobbed parcels back and forth at each other.

"It's complicated politics," he says. "If you're a pure remediation guy, you're going to say, 'What's this solar stuff? I want nothing damaging my remedy. Suddenly we're going to add this racking system on the surface, and a bunch of people are going to go onto the surface.'

"We're trying to break that perception down," says Webster. "It seems like you almost have to puncture through the fog," a fog often thickened by environmental compliance and the red tape of regulatory administration. But a younger generation may be helping.

Some companies are seeing the benefit of bringing real estate and remediation together on projects. Land use impact decisions once governed by senior managers whose stance was "Remediate the site and get into compliance, so I can report we're in compliance," are giving way to a generation for whom sustainability and renewable power are just part of doing business, not code words for unrealistic environmental goals.

"This generation will cause this change," says Webster. Meanwhile, "There are 100,000 landfills in this country with millions of acres of possible space."