Lots of areas are assembling water-related industry clusters. Milwaukee’s has been there all along, and it’s only getting stronger. 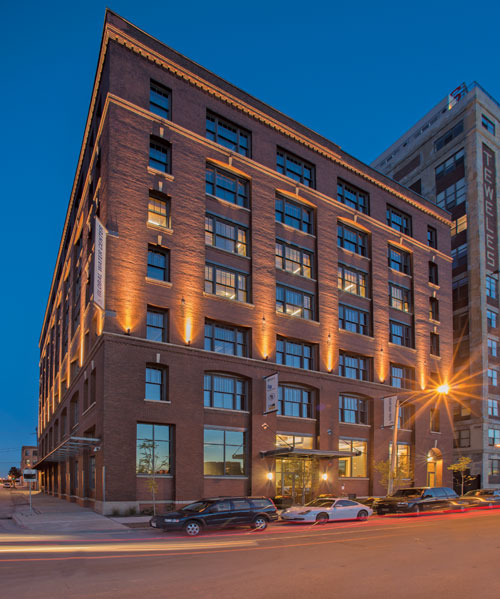 Milwaukee’s Global Water Center opened in September 2013, housing office and lab space for university research and new and existing water technology companies. Rexnord moved 60 senior executives into the Center where they are in close proximity to entrepreneurs and research expertise.
Photo courtesy of The Water Council
by MARK AREND
W

isconsin's entire eastern flank borders Lake Michigan, and part of its northern border fronts Lake Superior. But that's not why the state, and the Milwaukee metro area in particular, are becoming synonymous with water-related economic development. Wisconsin Economic Development Corp. reports nearly 300 companies with ties to the state's water technology industry, employing nearly 37,000 people. Such companies are located throughout the Badger State but are particularly concentrated in the Milwaukee area thanks, in part, to its long history as a center of the brewing industry.

It's not access to Great Lakes freshwater that is making the region's water technology cluster so healthy. Most companies could do what they do virtually anywhere, because they are making products like valves, faucets and meters. What makes Milwaukee a natural location for this industry is the wealth of research expertise, physical space built specifically for these companies, higher education programs and resources and public-private partnerships that facilitate companies' ability to succeed.

The Water Council is a consortium of water technology companies, universities and research centers, public entities, environmental organizations and others whose mission is "To align the regional fresh water research community and water-related industries to establish the Milwaukee region as the World Water Hub for water research, economic development, and education." It's working.

In September 2013, The Water Council opened the 98,000-sq.-ft. (9,100-sq.-m.) Global Water Center, a water research and business accelerator for universities, existing companies in the field and startups. Among the tenants is Rexnord, a global process & motion control and water management company and parent company of Zurn Engineered Water Solutions, which has moved 60 executives into the refurbished industrial building in Milwaukee's Walker's Point neighborhood. They got in just in time. 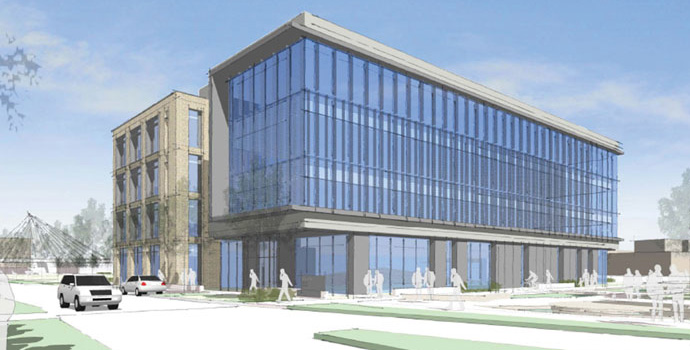 Construction begins in late 2014 on the first building on the site of Reed Street Yards, a Global Water Technology Park, where 1 million sq. ft. of space is planned - 70 percent of which is earmarked for water-related tenant companies.
Photo courtesy of The Water Council

"The building will be fully leased by the end of 2014," says Dean Amhaus, president and CEO of The Water Council. "We're already looking for a second building." 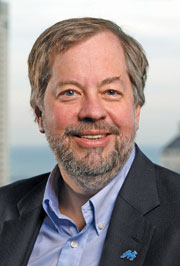 Dean Amhaus, president and CEO of The Water Council

Across the street are 17 acres (6.8 hectares) that have been designated as a Global Water Technology Park where the infrastructure "is just about done," says Amhaus. "It's a special demonstration site on water management. This site would offer 1 million square feet [92,900 sq. m.] in office space, and 70 percent of that is for water technology companies." Construction on the first building at the park gets under way this fall.

Meanwhile, Wisconsin is playing an ever-more-prominent role on the global water stage, a recent example of which is becoming part of the Alliance for Water Stewardship (AWS), which is promulgating international standards that Amhaus likens to LEED building standards for water usage.

"The Water Council will be the North American headquarters for the implementation of these standards," he explains. "We have been hosting the coordinator who for three years has been working on the development of these standards, and now the Alliance is moving into the implementation phase. They're about water quality and quantity. We're now figuring out how to develop the model for certification, training and so forth."

These standards are for a much broader range of companies than heavy users of water, like food processors. Every major company, whether industrial or not, uses water. Lots of water.

"The director of sustainability for AT&T says AT&T is not a water business, but they operate lots of facilities, and realize that water is important," Amhaus illustrates. "Kohl's, based here in Wisconsin, is tuning into their 1,100 stores on how they use water. We'll be working with entities like General Mills, Sealed Air - companies who tune into water. They're not necessarily water technology companies.

"That's where the tie comes back to Wisconsin and Milwaukee - as a location of solution providers for those companies that are tuned in and know water is important to their business. How do they improve their operations, and where will they put facilities based on water requirements? It's all connected." The AWS International Water Stewardship Standard was announced in April in Lima, Peru.

The Water Council doesn't just work with Wisconsin's water technology companies. The expertise resident in the Global Water Center and in the wider industry cluster applies to companies anywhere seeking to draw from the well of research and expertise resident there. A company in Alabama that is interested in establishing operations in California would know it has water-related issues that need to be addressed. 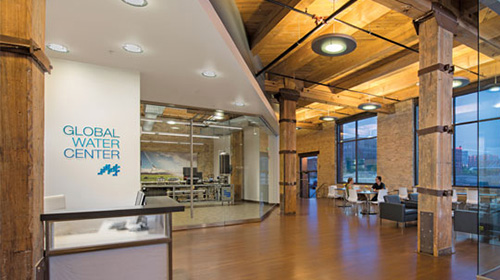 Amenities at the Global Water Center, located in Milwaukee's Walker's Point neighborhood, include a lecture hall and exhibition space, as well as core facilities such as a state-of-the-art water flow lab.
Photo courtesy of The Water Council

"So they call The Water Council, and we can recommend companies based in Milwaukee or Wisconsin that can provide the assistance they need in California," says Amhaus. "They don't have to come to Wisconsin. That doesn't do anything necessarily for Wisconsin as a business location, but it creates business for our companies in other places. Mind you, there may be some companies along the way as you're giving them this advice that end up looking at Wisconsin, or they may say they should set up an operation there because it is more water intensive, and will be closer to the experts."

Milwaukee's signature industry, brewing, is largely why this cluster is so robust, says Amhaus.

The Wisconsin Economic Development Corp.'s most popular tax credit program now has a transfer feature that is expected to prompt more companies to use it and could lead to additional growth and job creation. Governor Scott Walker in April signed a bill into law that allows companies receiving state Economic Development Tax Credits to transfer those credits to other companies under certain conditions. Before the change, those credits could only be used by the company that was authorized to receive them. If that company had no state income tax liability, it could not utilize the credit.

Under the new law, a company with no or little income tax liability that is planning a project can now receive those credits and transfer them to someone else in return for non-cash goods or services related to the project for which the credits were authorized. For example, a company leasing a building for an expansion project could transfer its tax credits to the owner of the property in exchange for lower rent. Or the company could transfer the credits to a contractor in return for reduction in construction costs.

Under the WEDC guidelines for the program, companies must express their intent to transfer the credit at the time of application and must meet at least one of four requirements:

The transferability provision can only be applied to new projects, not ones that also have been authorized to receive Economic Development Tax Credits.

"Miller-Coors, based here in Milwaukee, is thought of as a beverage company. We look at them as a water technology company because a certain portion of their business is finding solutions on water usage. Another brewing company might want to move to a higher level of engagement and do more. They are not going to move their facilities to Milwaukee necessarily, but they may move their research department here.

"All the technology companies that we're representing go back to the brewers and manufacturers and tanners who were heavy water users," he continues. "These were the solution providers for those companies. They kept on evolving and innovating because of the Clean Water Act 42 years ago. Things started to change. The location next to the lake is more of a convenience, but it's not dependent on the lake."

A Deeper Shade of Blue

Amhaus says more communities are trying on "the blue economy" moniker, pointing to their strengths in tourism, water and lake research. "All of that is important. But we're more about zeroing in on this one area of the economy - water technology. There are no NAICS codes for this. Badger Meter is in the flow measurement business, but they're measuring water. A. O. Smith is a manufacturer of water heaters. Water again. Water technology is applied in every single industry out there, from food processing to clothing."

What the blue economies don't have, says Amhaus, is "decades and decades of history, plus all the academic research going on. We have the only school of freshwater sciences. It's the only area with a university where you can get a business degree with a water emphasis - the science of water. Companies can now find people that know water in addition to accounting. Some think of the Water Council as an environmental organization. In fact we are an economic development organization that is focused on water."