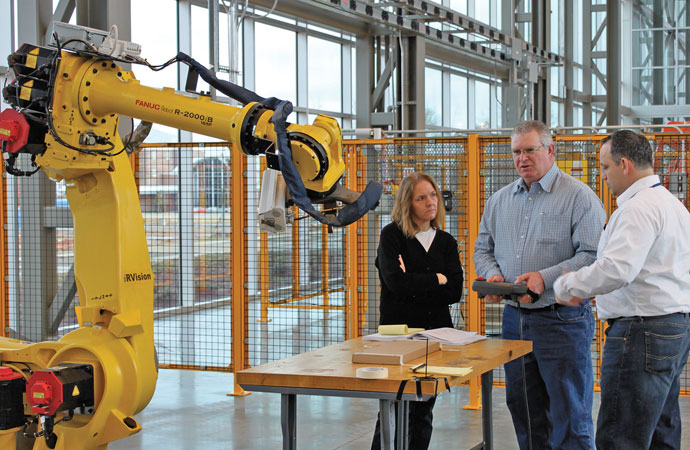 The $73-million Robotics Technology Park in the Huntsville-Decatur area consists of three individual training facilities, each targeted to a specific industry need.
Photo courtesy of AIDT
by PATTY RASMUSSEN
I

n October 2014, Alabama savored the enviable news that each of the state’s 67 counties raised their employment numbers. “Yeah, we were pretty pumped about that,” says Greg Canfield, Alabama’s Secretary of Commerce. That statistic translated to close to 1.95 million employed Alabamians, the highest figure since December 2008. The manufacturing sector alone gained 7,900 jobs from September 2013 to September 2014, and construction added 3,200 jobs according to the Center for Business and Economic Research at the University of Alabama.

“We are blessed with a readily available workforce that either possesses the skills necessary for the industries we’ve attracted to the state or have become equipped with the necessary skills to meet the demand of industry,” Canfield says. “But I think it says more to us that companies that already have a presence in Alabama, who are internally evaluating multiple projects and deciding where to spend capital, are choosing to spend it in Alabama. That tells us that those companies have continued to have great success that has exceeded their expectations and that as they view the workforce and the future required workforce, they feel comfortable with what we have today and the direction we’re going in tomorrow.” 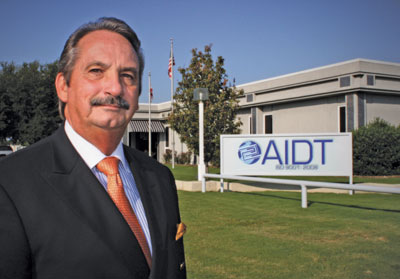 Building on the strong foundation of workforce education offered through Alabama Industrial Development Training (AIDT) programs, Governor Robert Bentley’s inaugural Alabama Workforce Council officially formed in July 2014. The council was a recommendation of the Governor’s 2013 Career and College Ready Task Force, and is made up of 28 leaders from every sector of business and industry.

“The governor recognized the importance of a sustainable, skilled and trained workforce,” says the council’s chairman, Zeke Smith, executive vice president for Alabama Power. “The needs of industry are changing. There are some tried and true skills that have remained the same but with the advance of technology we have to make sure that we take where we are today — which is very good — and move it even higher.”

The council makes its first round of recommendations to the governor this month. Among the topics tackled is aligning industry and education. “We want to have a better understanding of what education can deliver,” says Smith, “but perhaps more importantly, industry speaking back to education about skill gaps and what we need to do to develop the skilled workforce.”

One action item under the education/industry alignment heading is connecting industry with the 10 regional workforce councils already established across the state. “You can’t underestimate the importance of face-to-face communication,” Smith says. “We have to get engaged in those councils to make sure we’re communicating the gaps or needs associated with the jobs in those areas.”

Another key issue is data collection and assimilation, and making sure everyone has access to it. “Data can be king if you know how to get it, tap into it and utilize it,” Smith says. “We have to do a better job of bringing all the data that’s out there into a one-stop shop or repository.”

Smith says one of the council’s subcommittees is looking at creating apprenticeships, mentorship programs and scholarships through public-private partnerships. Finally, the council wants to create a buzz around the skilled trades. “Many students, and parents, don’t have knowledge of or understand the opportunities out there for someone who develops a skill,” says Smith. “We created a subcommittee to look at that and ask how we can better promote and market these careers.”

While the primary mission of the workforce council centers on the skilled trades and workforce development, Smith says they want to bring together all elements of the education system, from K-12 to the community college system to four-year institutions. “Everybody understands this is about the big picture, not taking anything away from any of our education communities,” he says. “This is about creating a better workforce for the state of Alabama.” 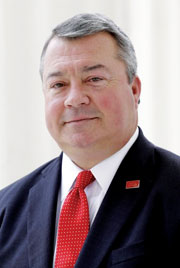 "The skill sets in demand today will change over time and maybe for the first time ever we’re beginning to think more about what we need in the future, five and 10 years from now."

Even before making their recommendations, Canfield says the Alabama Workforce Council represents something substantial. “We view their work as being very important,” he says. “It’s another signpost of our commitment in Alabama to partner with the private sector and address the future workforce needs. The skill sets in demand today will change over time and maybe for the first time ever we’re beginning to think more about what we need in the future, five and 10 years from now.”

Alabama is well known for building cars and aircraft, but the state will soon add firearms to that list. In February 2014, North Carolina-based Remington Outdoor, the nation’s oldest gun maker, announced it was building a $110-million manufacturing facility in Huntsville and would create 2,000 jobs. The AIDT handled recruiting for machine operators and maintenance and machine technicians.

Huntsville snagged another significant jobs creation project when Science and Engineering Services (SES) announced plans to add 450 jobs over the next five years as the company invests close to $70 million to expand manufacturing operations. SES is constructing new hangar bays, new office space, a parking lot, and parking spaces for aircraft. Ultimately, the SES facility will include a combined 1.3 million sq. ft. (120,770 sq. m.) of hangar, manufacturing and integration space throughout four facilities in Huntsville.

In March 2014, Honda, which has added 450 jobs in Alabama over the past three years, announced a $72-million expansion adding a modest 50 jobs. But one of the automaker’s suppliers, International Automotive Components (IAC), doubled its Anniston manufacturing plant. The 126,000-sq.-ft. (11,700-sq.-m.) expansion will result in close to 350 new jobs created over the next two years. IAC makes molded plastic instrument and door panels, flooring and acoustic and interior trim systems for several car manufacturers in addition to Honda.

AIDT’s Robotics Technology Park (RTP), a training center close to Huntsville that’s been up and running for three years, has trained employees for many of the state’s premier manufacturing facilities. “The RTP will soon become an American Welding Society [AWS] certified training facility for manual welding, certified welding inspector [CWI] and certified robotic arc welding [CRAW],” says Rick Maroney, project manager at the facility. “The RTP will be the facility to offer CRAW certification below the Mason-Dixon Line. These certifications are huge for the RTP and companies in the south.” 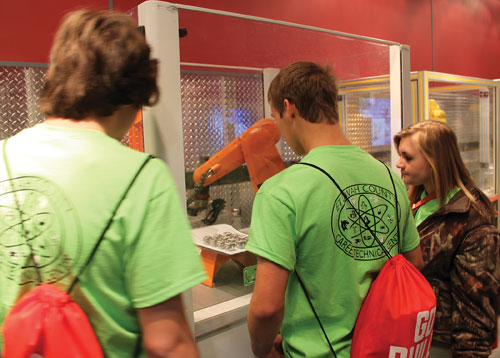 The RTP is a collaboration between the State of Alabama, Calhoun Community College, AIDT and robotics industry leaders across the nation.
Photo courtesy of AIDT

In response to industry needs, AIDT created and operates other centers of excellence including those focused on shipbuilding and welding, aviation and woodworking, and the newly opened Alabama Workforce Training Center in Birmingham, which focuses on skills training in the construction trades. In addition to listening to industry partners, Ed Castile, director of AIDT, says his agency’s relationship with the state education system, especially two-year colleges, is a vital piece of the workforce puzzle.

“At AIDT we’re more like workforce finishers,” he says. “We’re not educators, we’re training. Employees and job-seekers have to have education to be in a training program. They need math skills, they need the ability to read technical material and be able to apply it. When we get students from the two-year-college system, they’re trainable. You hear about middle skills — the two-year system is the middle skills educator.”

"The needs of industry are changing … With the advance of technology we have to make sure that we take where we are today — which is very good — and move it even higher."

It’s taken awhile, but the notion that a four-year degree is the ticket to attaining the American dream has fallen by the wayside. Bill Taylor serves as President of the Economic Development Partnership of Alabama (EDPA). He stresses the importance of employing workers from every educational stratum, and offers an automotive robotic cell as an example.

“To program them, you need a four-year degree,” Taylor says. “To maintain them, a two-year degree, and to operate them, a high school diploma; they’re all needed to make the future of advanced manufacturing work. When Mercedes Benz US International first came here in 1993, other than engineering and those types of disciplines, we looked for grade 12 grads. Now the industry looks for all three streams.”