Seeking the perfect location? Looking for buried treasure? A map can sometimes lead to both.

Study the map on the facing page and you’ll get it. The economic development team at Florida Power & Light Co. in 2013 helped companies in its territory create 11,997 jobs with nearly $15 billion in project investments among 4.7 million customers in a 35-county area of Florida populated by 13.3 million people — more than half the state. They included the HQ move by Hertz to the Greater Fort Myers area; and Northrop Grumman bringing 1,000 jobs to Brevard and St. John’s counties.

As of April 2014, 29 companies creating a total of 4,700 new jobs had qualified for FPL’s economic development rider (EDR) rate, which requires 25 jobs per 350 kW of new demand.

“Florida has an attractive business climate, and FPL’s low electric rates certainly are an important factor,” said Bill Foley, president of food distributor Cheney Brothers Inc. as the company constructed a new $100-million distribution center in Charlotte County that will create 300 jobs. “The discount we get from Florida Power & Light is essential.”

Companies also have a new FPL tool to employ: A new Commercial/Industrial Service Rate (CISR), designed to attract new, large power users to the state as part of a competitive location project, was authorized in early 2014 by the Florida Public Service Commission. Lynn Pitts, director of economic development for FPL, calls the CISR “the next level” for FPL economic development: “It will make us even more competitive,” he says.

It will also help the state’s largest utility attract more data center companies, who are always on the hunt for strong infrastructure, reliability and redundancy. A complementary feather in its cap came the utility’s way in Nov. 2014 when PA Consulting Group, Inc. recognized FPL as the recipient of two 2014 ReliabilityOne™ Awards.

FPL is known for its reliability of 99.98 percent. But it isn’t satisfied with that. Since 2006, FPL has invested more than $1.5 billion in electric grid improvements, including the strengthening of more than 500 main power lines serving key community facilities; and the installation of 4.6 million smart meters and 11,500 intelligent devices — to prevent and reduce power outages while providing customers with unprecedented levels of information.

That sort of data is music to the ears of data center companies and any others who may benefit from the utility’s EDR or CISR. 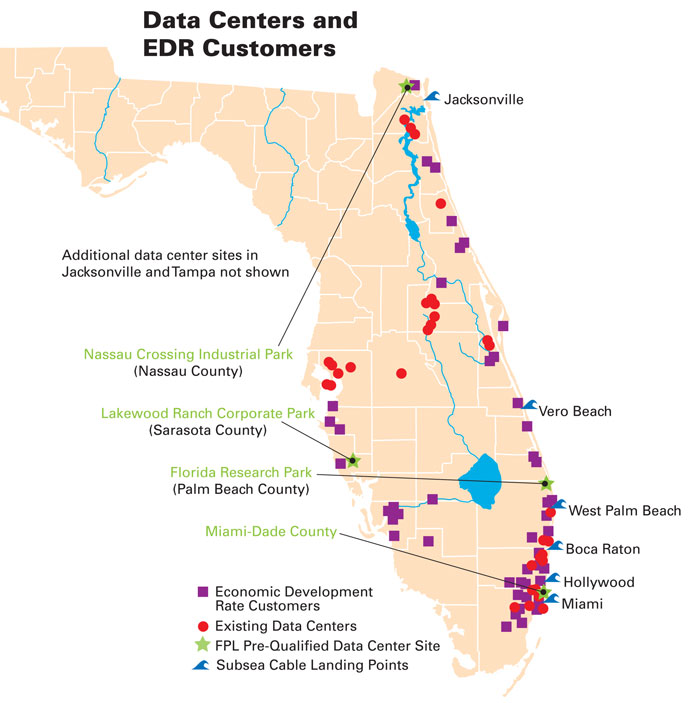 FPL territory covers 35 counties that are home to more than 13 million people. While that alone serves as a draw for many firms, the undersea fiber cable landing points along Florida’s eastern shore may offer access to a whole lot more.

FPL is on the way toward pre-qualifying four data center sites (see starred locations on map).

“We will likely expand the program in 2015 to four more sites, for a total of eight, giving us greater geographic diversity for data centers with varying requirements,” says Pitts. The menu of sites will offer close proximity to the state’s East Coast undersea fiber cable landing points (see map), directly connecting the state to Latin America and Europe.

Florida can’t exactly offer ambient-air cooling for the servers in those data centers. But it can offer something that might surprise: a risk rating of low to moderate for natural disasters, and even then (hurricanes), planning can prevent damages. “It’s not that difficult to design for hurricane force winds or any other type of natural disaster,” says John Reis, New York Critical Facilities Practice Area leader for Syska Hennessy Group, Inc.

Data center operators such as Equinix (which opened its MI3 facility in Boca Raton in 2012), Verizon’s Terremark, Digital Realty Trust (two facilities in Miami-Dade) and Spain’s Telefonica make FPL’s business case for them.

Verizon has its flagship NAP of the Americas in Miami, providing backbone access to 160 global carriers. Telefonica launched its KeyCenter in Miami in 2013, built to withstand Category 5 hurricanes, and positioned to connect with the company’s worldwide high-bandwidth network via those submarine cables. And in announcing in Nov. 2014 a $20-million investment at two locations in Jacksonville, Cologix noted the interest among customers in “establishing connections with the two new subsea cable systems that are landing directly in Jacksonville from Central and South America.”

It’s no accident those companies are beginning to sound like utilities themselves. Fortunately for them and their customers, in FPL they are finding a partner as reliable in economic development as it is in providing affordable power.

This Investment Profile was prepared under the auspices of Florida Power & Light Company. For more information, contact Lynn Pitts, director of economic development, at 561-694-4272 or by email at Lynn.Pitts@FPL.com, or Crystal Stiles, economic development project manager, at 561-694-4112, or by email at Crystal.Stiles@FPL.com. On the Web, go to www.PoweringFlorida.com.