Place With a View

Companies come to Portugal with the future in mind. 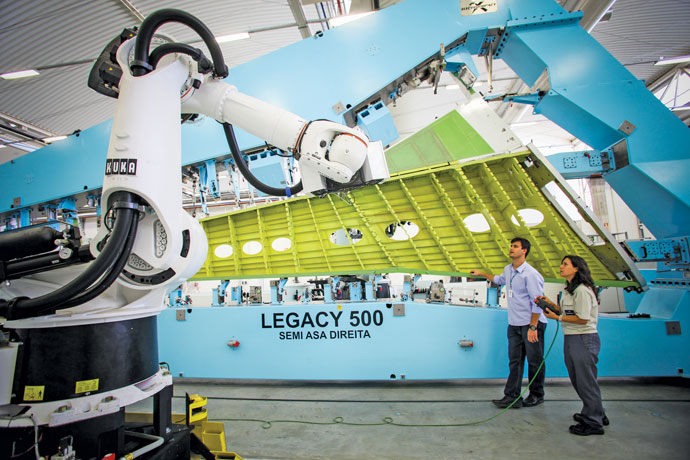 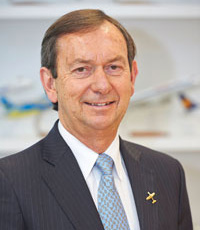 ortuguese talent and sense of quality have been revered for centuries, from navigating the high seas to moving the ball around the futbol pitch. The quality and depth of Portugal’s talent base figures to help the westernmost nation in Europe navigate the seas of the 21st century economy.

Today, Luiz Fernando Fuchs, president of Embraer Aviation Europe, says the two Embraer companies in Évora continue to make their mark, fueled by the performance of some 250 employees.

“We’re concentrating key technologies there, in the two respective areas — parts and structures manufactured in composite materials, and parts and structures manufactured in aluminum,” he says. “It is also part of our strategy to develop those technologies further, making sure the operations in Évora remain at the state-of-the-art in those two areas and unique within our global operations.”

Embraer established a joint team with AICEP, the Portuguese Trade and Investment Agency, in 2006 to evaluate ideas and scenarios regarding possible investments in Portugal.

“We looked at different possible locations while, internally and at the same time, we then defined the business model and the technological content needed for the kind of companies that we wanted to establish,” says Fuchs. “Taking into consideration such variables as infrastructure, logistics, incentives and potential to develop a local supply chain suiting our needs as well as the availability of talented workforce were certainly at the core of our decision-making process.”

Embraer announced Évora as the chosen location for two facilities in 2008. The new €77-million Embraer Compósitos center was completed and inaugurated in September 2012, together with a €100-million investment by Embraer Metálicas.

Among other factors, Fuchs says the transport infrastructure has turned out to be as advertised, calling it “certainly one of the strongest selling points for the country to attract basically any kind of investment.”

Fuchs says AICEP and Portuguese authorities were “very helpful” in sharing plans for talent development initiatives, not just for Embraer but for the entire aerospace sector. At the same time, he says, “we have to mention as well the dedication and efforts led by the Institute for Employment and Professional Training (IEFP), involving their centers in Setúbal and Évora to train our future employees.” 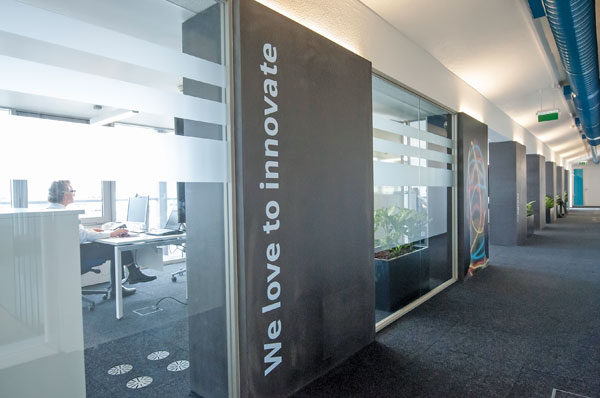 Now present in Portugal for 110 years and employing 2,500 people in the country, Siemens in spring 2014 inaugurated a global IT center in Lisbon that is expected to employ as many as 300 when the second phase is completed.
Photos courtesy of Siemens Portugal

And there’s no other way of saying it: That workforce is available. According to the National Statistics Institute (www.ine.pt), the unemployment rate has gradually been decreasing since 2013, but still hovered at 13.1 percent in the third quarter of 2014. Frasquilho says 688,900 people are looking for a job. Half of them are young people between 15 and 34 years old.

“Students enrolled in tertiary education have been increasing over time, and engineering and science areas already represent 43 percent,” he says.

Job creation incentives in Portugal include internship support for up to 12 months, applied to unemployed people aged 18 to 30; the estímulo initiative providing grants supporting labor contracts with unemployed persons enrolled in the Employment Center for more than six months; temporary exemption of social security contributions for 36 months under certain age and unemployment conditions; an incentive of 1 percent of the gross monthly wage for each contract signed until September 30, 2015, or until the end of the contract, whichever comes first; and the inov contacto program, whereby an employer can apply to get interns abroad, aged up to 30, for a six-month period.

" Our expanding Portuguese team has quickly gained a reputation for professional expertise, high energy, quick learning and cross-functional teamwork ... I now experience a pull from the business to bring more activities to Portugal, as well as to export our talents!"

At the same time, the government has put in place measures to encourage foreign talent to work in Portugal: Qualified expatriates in high added-value activities, scientific, artistic or technical activities or upper management positions may apply for a flat income tax rate of 20 percent (+3.5 percent) for a maximum period of 10 years. Half a million foreigners live in Portugal, which means a wide native language pool is available.

Getting Better All the Time

Frasquilho, who served from 2003-2014 as a member of Parliament in Portugal, was a member of the Corporate Income Tax Reform Commission.

“The CIT reform put forth a set of measures that aimed to raise the competitiveness of the Portuguese tax system, simplify the system and foster investment,” he says. Among the highlights:

FDI In Their Sights

After seeing FDI climb each year for four years to a high of more than $47 billion in 2012, Portugal saw a drop in 2013 to a still-impressive $30.1 billion, with most FDI coming from the EU-28 countries. AICEP’s strategic plan for 2014-2016 aims to both increase the internationalization of Portuguese firms and increase incoming FDI, in part by expanding its overseas network to a total of 65 markets. AICEP is also introducing a network of “FDI Scouts” in North America, Europe and Asia.

“This means more investment, more economic growth and more employment, which is what we need,” says Frasquilho.

Portugal exited the bailout in May 2014. “The terms and conditions of the financial assistance were successfully implemented and an economic recovery is now on track,” says Frasquilho, noting the country’s positioning for a steady and strong return to the international financial markets.

GDP, expected to grow in the next few years based on more domestic demand and boosted exports, already has shown steady quarterly growth over the past year, aided by a set of important and structural measures being implemented to promote labor flexibility, wage stability, a business-friendly environment, tax reduction and employability incentives.

Avenues to the World

Many such projects are taking place in the ICT, digital/creative and shared service center/BPO sectors.

“These are indeed the most dynamic investment areas in Portugal,” Frasquilho says. “The country has been witnessing a huge increase due mainly to multi-language skills available, competitive labor and structural costs, attractive quality of life, public transportation, well-designed office buildings and reliable telecom.”

Siemens Portugal in April 2014 inaugurated its new global IT operations center in Lisbon, planning to employ 150 by the end of 2014 and up to 300 eventually. As of 2015, Siemens will have been present for 110 years in Portugal, where the company employs 2,500 people.

Language proficiency is a competitive advantage. Forty-two percent of the Portuguese population can hold a conversation in at least one foreign language, and 23 percent can do so in at least two languages. The Portuguese language itself is spoken in countries srepresenting 250 million consumers. Portugal is one of the 30 leading countries for Siemens in part because the company’s operations there help support business development in the Portuguese-speaking markets of Angola and Mozambique.

A total of 32.6 million commercial passengers traveled through national airports in Portugal in 2013, up by 4.9 percent. 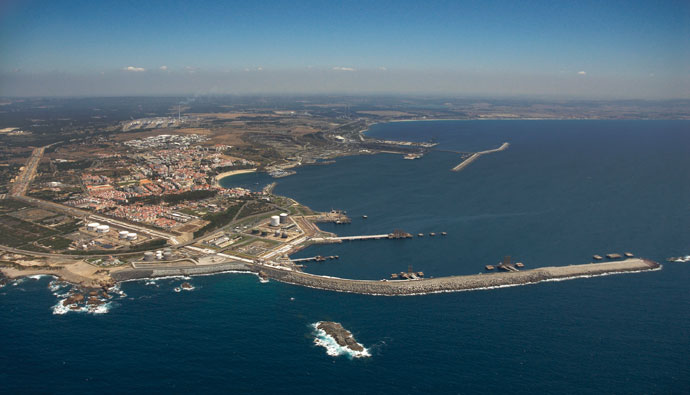 The Port of Sines in 2012 entered the Top 25 ports in Europe in terms of tonnage, and was Europe’s No. 2 port in container handling growth at 24 percent. The movement of goods in national ports grew to 78.2 million tons in 2013, a 15.1-percent increase from the preceding year. 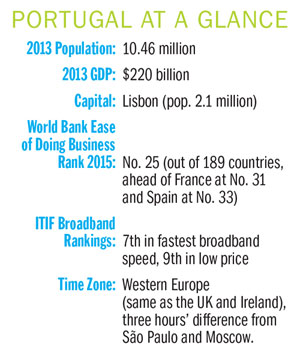 “If I had to select just one truly distinctive feature of the country, I would emphasize the quality of our human capital,” says Joana Garoupa, head of communications for Siemens in Portugal, with recruitment efforts at universities supplemented by connections with AICEP and with the IEFP. “The talent of our people is, and has always been, the key to our success and is also one of the main reasons for Siemens’ long history in Portugal.”

She says that success has not gone unnoticed at the company’s German headquarters. “In fact, it was one of the criteria that influenced the decision to locate Global Competence Centers in Portugal. Currently, we export services in the areas of energy, infrastructures, information technology, healthcare and shared services to 200 countries in five continents through 14 Global Operational Centers based in Lisbon.”

Cisco Systems Portugal has its own story to tell. In 2007 Cisco invested in its first sales support center aiming to serve all European countries from its local subsidiary in Oeiras. Nuno Varandas, Cisco Systems’ director of customer operations for the EMEAR region, says the decision was a result of thorough analysis of several countries’ attractiveness factors such as infrastructure costs (real estate and IT), labor costs, talent availability and language skills. “Additionally, the country’s economic situation, social-political stability and labor law were also key indicators that Cisco was evaluating,” he says.

Varandas says Portugal was not even a candidate at the start of that process. So he had to sell it internally, based on the country’s “foundational pillars built around a customer service mind-set, strong language skills and education levels. These were key success factors that made Portugal become the final choice. Intangible aspects such as hospitality, easy integration of foreigners and the image that Portugal has of being a safe country to live were also important.”

He says AICEP was “a true facilitator” of the entire process by allowing Cisco decision-makers to meet and exchange ideas with other companies. “Also the ease of access to government officials was key, since it allowed Cisco to understand better the level of commitment that we have observed from the Portuguese Government and the local agency.

“The success of this first support center — with over 2,000 job applications for 50 positions — placed Portugal as one of the five official key locations around the globe for similar types of investments and operations,” Varandas says. “Overall, what made Portugal attractive was the balance between quality and cost. Portugal was at the time and still is today a very compelling and competitive location since it blends nicely the existing labor market overall skills and some elements of cost attractiveness. It’s not the largest labor market when compared to Western and more mature countries with a larger pool of skills and resources, but also not the cheapest when compared with other Eastern countries. The secret sauce is exactly that blended combination on the return of the investment you make when tapping into local talent at a competitive ‘price.’ ”

Today the site’s 200 employees average 34 years of age, with 90 percent carrying a university degree (from 16 different academic backgrounds). Sixty-six percent are female, and 25 different nationalities are represented. Varandas says the “diverse ecosystem of skills and nationalities speaks to the richness, diversity and overall attractiveness of the local site in Portugal.”

Being named the Best Company to Work For in Portugal by the GPTW Institute for the fourth year in a row “proves that the decision we have made was the right one,” he says. “We sell Cisco in Portugal but also continue to sell Portugal in Cisco. The future starts here!”

Such a statement might easily be applied to the sovereign nation of Portugal itself.