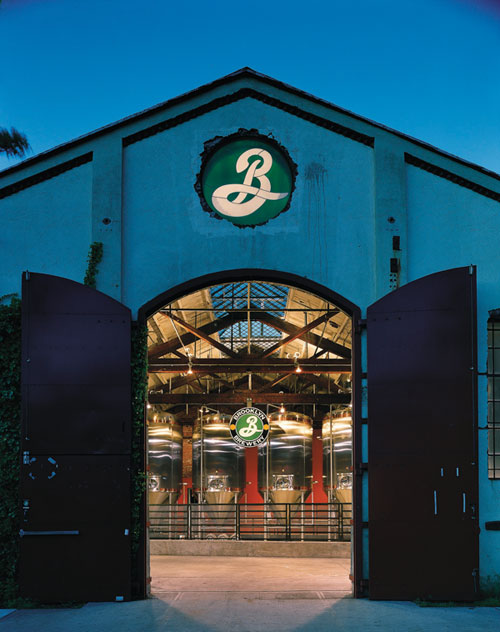 Among the projects receiving REDC funding in Round IV is the $70-million Brooklyn Brewery project on Staten Island, expected to create at least 140 new jobs.
2009 photo of original Brooklyn site courtesy of Brooklyn Brewery

The latest round of regional project funding is among several ongoing programs aiming to seed prosperity across the state. 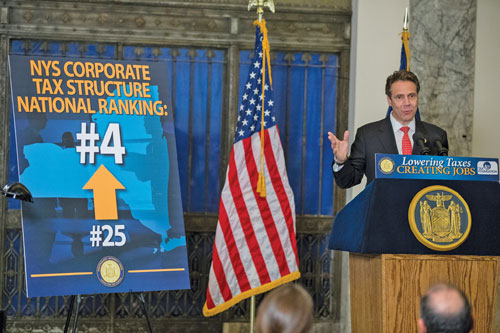 Gov. Andrew M. Cuomo speaks in October at the Museum of American Finance in New York City, where he received an award from the Tax Foundation given to New York State for its commitment to expanding the corporate tax base and reducing the income tax rate to its lowest level since 1968.
Photo courtesy of the Governor’s Office

onors and accolades are great. Cold hard cash is too. The cash soon will be flowing thanks to three award-driven processes now underway in New York, including new casinos going to the Catskills, Schenectady and the Finger Lakes.

Less of a gamble to many is the $709.2 million in economic and community development funding awarded by Gov. Andrew M. Cuomo in early December to 852 projects through Round IV of the Regional Economic Development Council (REDC) initiative he established in 2011. The first three rounds of the Regional Council process awarded more than $2 billion to more than 2,200 job creation and community development projects across the state, supporting the creation or retention of more than 130,000 jobs in the state’s 10 defined regions.

Among the REDC Round IV funding highlights by region:

$3.1 million to the Merlin Entertainments Group for a LEGOLAND resort in Haverstraw; $2.5 million to Jawonio Inc., a provider of services for the disabled and people with special needs in the lower Hudson Valley, for the $24-million enhancement, consolidation, and 97,000-sq.-ft. expansion of its 16.8-acre main campus in New City, Rockland County; and $1.25 million to LED fixture manufacturer USAI to expand and modernize its facility in New Windsor.

$2.9 million for the Delaware County Broadband Initiative; $2 million to the Corning Hospital Redevelopment Project, which will transition the former hospital site to a shovel-ready site attractive for future mixed use redevelopment, after the hospital is relocated from the City of Corning to the Town of Corning.

$5 million to High Tech Rochester, Inc. to assist with the Finger Lakes Business Accelerator Cooperative, including a hub facility in Rochester; $3 million for the redevelopment of Sibley Tower, a huge historic department store in downtown Rochester, into a mixed-use development that will include Class A office space; $1.5 million for construction of Rochester Institute of Technology’s MAGIC Spell Studios, to drive activity from RIT’s academic programs to commercial viability in the areas of computer gaming, film and animation, illustration, graphic design and imaging science.

RIT is already a recognized leader in these fields. Among the graduates of its nationally ranked School of Film and Animation are several Academy Award winners, and its game design and development program is ranked among the top in the country. “With MAGIC Spell Studios, we can put Rochester on the map as a national contender, said RIT President Bill Destler when the REDC award was announced. “It’s time to engage that talent and grow businesses right here.”

$3.6 million to transform and reopen the previously closed Hotel Syracuse as the Onondaga County Convention Center Headquarters Hotel; $1.8 million to the Syracuse Smart Regrowth Sustainable Corners Project to revitalize a Near Westside neighborhood to convert underutilized or vacant property into a mixed-use development.

$5 million to the Development Authority of the North Country for establishment of a redevelopment fund; $2 million for a manufacturing facility modernization by cheese maker Agri-Mark.

$2.5 million for the National Urban League Redevelopment Project, to turn its former HQ into a mixed-use development; $6 million for the $70-million Brooklyn Brewery expansion project on Staten Island, expected to create at least 140 new jobs.

$1.5 million for the Troy Farmer’s Market Project, a mixed-use facility on the site of the former Troy City Hall; $1.2 million to the Schenectady Metroplex Authority for the Robinson Block Transformation, leveraging public and private investments of over $18 million to revitalize three blighted city blocks in downtown Schenectady within walking distance of Schenectady County Community College and Union College, the Downtown business district, and Amtrak and Capital District Transportation Authority access points; $1 million to Finch Paper for a $20-million modernization of its Glens Falls mill that will strengthen its competitive position and help sustain more than 600 existing jobs.

$4 million to Northeast UAS Airspace Integration Research Alliance to install surveillance and radar at the FAA-designated Griffiss International Airport test range and to the north in the Lowville area, to give the FAA NY Unmanned Aerial Systems Test Site the potential to take on lead development of a Detect and Avoid system for safe UAS operations in national airspace; $1 million to the Marcy Nano Center at the SUNY Polytechnic Institute to support plans for an end-user for the project site to expand its investment in the G450 Consortia by developing the site to support full build-out for a three-fab campus that can support millions of square feet of advanced manufacturing facilities.

$1.5 million to the National Comedy Center in Jamestown for the renovation of two buildings and construction of a new structure; $900,000 to People United for Sustainable Housing (PUSH) for the Buffalo Sustainability Community Initiative; $500,000 to Erie County for the Bethlehem Steel Acquisition and Redevelopment of 180 acres of brownfield into shovel-ready property.