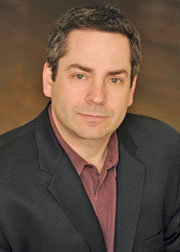 Steve Weitzner is a principal at Silverlode Consulting, a site selection and economic development consulting firm based in Cleveland, Ohio. Prior to starting Silverlode with Dennis McAndrew, he was the founder and area director of business incentives services for the Lake Erie Area of Ernst & Young LLP, and also helped launch a national site selection and economic development consulting practice for Coopers & Lybrand LLP.

The results of this year’s survey of site selection consultants are an interesting reflection of a complex and diverse industry, especially in the US. One might expect that in a survey of this nature comprising only seven questions, strong patterns and commonalities would emerge; however, this year’s respondents seem ready to agree to disagree about almost everything.

The first question sought to gather information about whether consultants work the most with state, regional, county or local economic development officials throughout a project. While the most common answer was the regional level, this garnered less than 40 percent of the responses, with state level and local level being the next most common answers at around 28 percent and 26 percent, respectively.

This distribution is not surprising considering the varied approaches to economic development throughout the country. Perhaps more importantly, based on our experience, a highly capable and motivated individual is often the determining factor in who we work with, as opposed to the organizational structure within a geography.

"In our experience, the quality of the people matters much more than the structure of the agency."

The next question in the survey asked about the importance of a state’s business climate early in the site selection process. This was the one question about which most of the respondents could agree, with more than 90 percent answering “Very Important” or “Somewhat Important.” So we all basically agree that business climate is important — but our agreement ends there.

What is “business climate?” Of the hundreds of responses to this question, the things mentioned as the top two or three elements of business climate can be consolidated into no less than 26 different factors. The most common factors cited relate in some manner to taxes, at nearly 30 percent of the responses. This was followed by labor force, which was the only other factor to achieve double-digit popularity at just over 10 percent. Unions, regulatory environment, incentives, business support and education/workforce development were the next most frequently mentioned elements of business climate.

This variability in how professionals in the field define what is important to them when evaluating sites is critical information for economic developers, and demonstrates the main reason we and many other firms are cautious about relying on published rankings of business climates. The relative importance of various location factors can change dramatically from one project to another, and this can impact how consultants think about business climate. Economic developers should ideally get as much information as possible about each prospect, and tailor responses to highlight those factors which are likely to be weighted the heaviest. 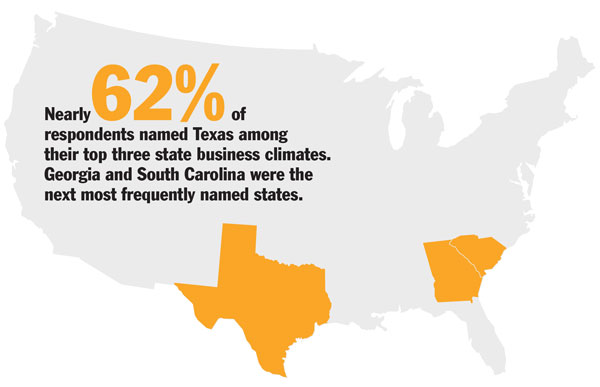 For example, a new manufacturing site project is likely to place more weight on business climate factors such as the labor force and regulatory environment, while headquarters projects generally focus more on elements such as taxes and incentives. Economic developers should not be shy about asking questions and seeking greater clarity on the specifics of a potential project. We are happy to be engaged with the public sector on our projects, as it almost always results in a more efficient and successful process. 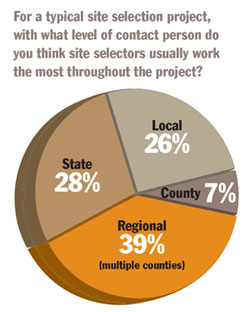 Participants were asked to name the three states they believe have the best overall business climate. Perhaps no question better illustrates the lack of consensus within the industry, with 35 different states being named among the top three by participants. The state named most often was Texas, with nearly 62 percent of the respondents including it among their top three. South Carolina and Georgia took the next two spots to complete the top three, but several other states were also frequently mentioned, including North Carolina, Tennessee, Florida, Louisiana, and Indiana. Arizona and Virginia rounded out the top 10.

Among these top 10 states, there is almost an even split between those states which have privatized their economic development functions and those which have maintained economic development as a government department. In our experience, the quality of the people matters much more than the structure of the agency. Perhaps not surprisingly, the South and Southeast continue to be perceived as regions with good business climates.

Asked which countries abroad “offer the best opportunities for profitable business investments in 2015 and beyond,” respondents named Mexico most often, followed by China and Canada.

The survey’s final question asked which countries abroad “offer the best opportunities for profitable business investments in 2015 and beyond.” Consistent with the persistent inconsistency exhibited above, nearly 40 different countries were mentioned in responses to this question. Mexico was the most cited country, with one-third of respondents naming our neighbor to the south. China and Canada were also popular answers, with each being mentioned by approximately one-quarter of the participants. The rest of the top 10 included Brazil, Ireland, India, South Korea, Singapore, the UK and Malaysia.

The results of this year’s survey demonstrate that site selection is both an art and a science. We tend to focus on the quantitative elements because they are easier to measure, but the site selection process is strongly influenced by our impressions and perceptions as well. The participants’ varied experiences with different industries, types of facilities and geographies are reflected in the results of this survey.