Small Towns On the Hunt 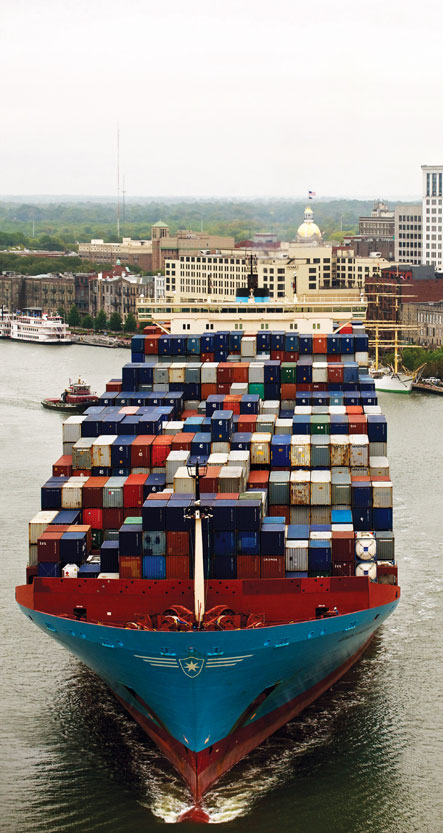 ew sites and past project candidates alike, many with updated and certified infrastructure or unique rail and highway advantages, are among the pages of 1,000-acre-plus sites in the US and abroad listed in Site Selection’s 11th annual Super Sites chart, available at www.siteselection.com beginning in January 2015.

What the charts can’t tell you is the stories behind those parcels, couched in small-town history, land deal negotiations and, usually, an agricultural legacy.

Here we present a few glimpses of the communities whose hearts beat alongside the megasites. Each of those sites in turn holds the promise of quickening its town’s economic development pulse.

The Midwest Mega Commerce Center goes by the Star Wars-like moniker M2C2, but the only special effect its neighbors want to see is a fusillade of jobs.

Situated near the two four-lane limited access highways U.S. Route 35 and Interstate 71, M2C2, at 1,517 acres, is the largest parcel certified by the State of Ohio’s Job Ready Sites program. Zoned industrial, and with all utilities on site, it’s under option by the Fayette County Commissioners. Phase 1 environmental and archaeological work is completed. The site has access to Norfolk Southern and CSX via on-site rail siding. And its infrastructure has capacity of 1 million gallons per day for both water and sewer service.

One of Ohio’s perennial strengths is its large family of decent-sized cities and towns. In M2C2’s case, three of those cities are within an hour’s drive: Columbus, Dayton and Cincinnati. They’re not exactly small, but their charms are many.

As part of the area’s annual Balloons, Blues & BBQ event, balloons prepare to launch at Tolen Creek Park in Parsons, Kan., near the Great Plains Industrial Park.
Photo courtesy of City of Parsons

Farther west, the Van Wert Mega Site is located along Interstate-quality US Route 30 some 35 miles from I-75 to the east and 35 miles from I-69 to the west. Served by AEP Ohio and Dominion East Ohio Gas, the site is part of AEP’s Quality Sites program, in partnership with respected consultants McCallum Sweeney, and is undergoing certification for the state’s Ohio Job Ready Sites program. Water, sewer, fiberoptics and a new rail spur make the 1,600-acre site one of two shovel-ready mega industrial sites in the State of Ohio, with land options secured through 2022. Fort Wayne, Ind., and Lima, Ohio, are each a bit over half an hour away. But as reported in a Nov. 2014 Site Selection Investment Profile of Northwest Ohio, in addition to its own family of incentives, Van Wert — whose slogan is “Welcome Home” — has its own charms.

“It’s a rail town,” Austin Consulting’s Jonathan Gemmen told us, noting Van Wert’s strong set of employers and quality school system, which just built a new high school. “Just over two years ago, when I made my first visit, I was pleasantly surprised at what I saw, and the sense of community for a town that size. It’s helpful when you talk about bringing in plant managers and executives to get a large operation started up. This site has done the homework, and they’re well positioned.”

The Western New York Science and Technology Advanced Manufacturing Park (WNY STAMP) is located in the town of Alabama, N.Y., five miles north of the New York State Thruway (Genesee County). The site sits halfway between Buffalo and Rochester, and is near perennial top-performing micropolitan Batavia. STAMP spans 1,250 contiguous acres and is designed for semiconductor, biotechnology, and advanced manufacturing projects.

Attributes include the ability to access over 500 MW of power from 345kV bulk transmission circuits owned by the New York Power Authority, hydropower rates at approximately $0.035 kWh delivered from Niagara Falls, access to a 24” high-pressure natural gas line owned by the Empire Pipeline, access to major water resources from the Great Lakes, and access to a population of 2.1 million. Proximate to the site are six universities with over 17,000 engineering professionals enrolled, and five community colleges with over 53,000 students enrolled. 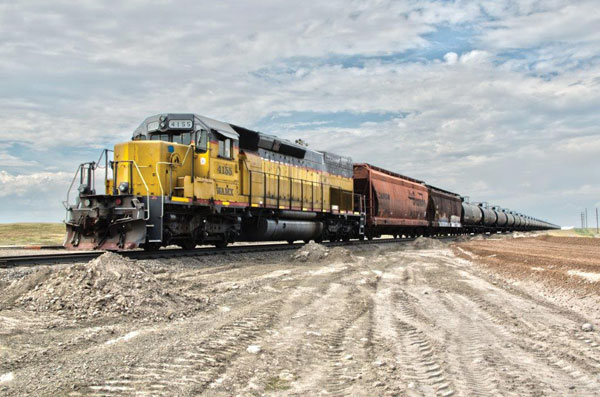 The Final Generic Environmental Impact Statement for the entire park has been completed, as well as re-zoning of the land to reduce environmental permitting times for perspective tenants. In the 2014-15 New York State budget STAMP was awarded $33 million for infrastructure to support client requirements. The STAMP site has been validated as a regional priority project by the Finger Lakes Regional Economic Development Council.

You Are in Kansas After All

When the Kansas Dept. of Commerce sent out the call to its communities in response to this publication’s survey for new or updated megasites, among the respondents was a parcel bordering Hill City, Kan., along a one-to-two-mile stretch of Highway 283 in northwestern Kansas. Hill City, home to around 2,000 people, was named for real estate man W.R. Hill. The town’s Oil Museum pays tribute to the leading industry of the past. And an abundance of quail, ducks and pheasant call to hunters from the surrounding fields. 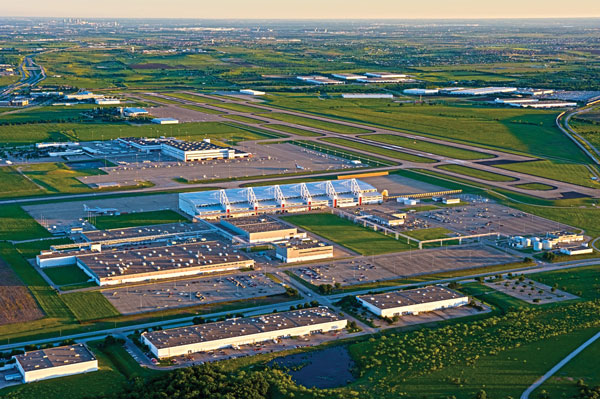 
"With thousands of acres, you can do some things maybe a lot of people can’t do."

That same call sounds down in the southeastern corner of the state. Labette County was named a few years ago as one of the top whitetail deer hunting areas in the nation by Outdoor Life magazine, in part because of the nearly 14,000 acres (6,800 of them developable) at Great Plains Industrial Park (GPIP), the name given to the site of the former Kansas Army Ammunition Plant that was on the 2005 Base Realignment and Closure (BRAC) list. Within the park’s boundary the Kansas Department of Wildlife and Parks owns 3,000 acres and manages more than another 6,000 acres of unique Kansas habitat — native prairie grasses and wildflowers, wetlands and woodlands. Nearby are Big Bill Lake, with some of the clearest water in the state, and the Neosho River’s catfish and paddlefish.

"Wyoming’s rating as the friendliest place to do business combined with our historically low tax rate and the capacity of the Swan Ranch are creating a perfect storm for economic development in the area."

Within GPIP there are 106 miles of existing roadways, 30 miles of rail and existing water and wastewater treatment plants. Ready access by rail to the Port of Catoosa (in Oklahoma) and nearby I-44 provides for ease of shipping domestically and internationally. And as a symbol of regional partnership the park doesn’t have many rivals, as it’s promoted by the Joplin Regional Partnership, consisting of three counties in Southwest Missouri, three in Southeast Kansas, and one in Northeast Oklahoma.

Development in Parsons has benefited from the realignment of US Highway 400 north of town. The town itself has been rebuilt since a tornado in 2000, and every year plays host to a Balloons, Blues and BBQ event.

The Swan Ranch Industrial Park in Wyoming, located four miles north of the Colorado border, in 2014 welcomed its first unit train, consisting of 133 crude cars coming in on the Union Pacific Railroad for loading. The rail expansion project now connects the UP and BNSF railroads to the park. “This 4,000-acre development primarily serves the heavy industrial and energy segments,” said Scott Sutherland, director of real estate at Granite Peak Development, in a release. Total investment in infrastructure at the park now exceeds $100 million. “The property borders are impressive as well — Interstate 25, Interstate 80, the Union Pacific and the Burlington Northern Santa Fe.”

According to Randy Bruns, the CEO of Cheyenne LEADS, “Wyoming’s rating as the friendliest place to do business combined with our historically low tax rate and the capacity of the Swan Ranch are creating a perfect storm for economic development in the area.”

Most urgently, the park is at a prime location to serve oil & gas needs, whether moving crude oil trains or railcars full of frac sand, in Colorado and Wyoming.

In Texas sits the megasite dream that sites everywhere aspire to: The 18,000-acre AllianceTexas development in Fort Worth, 25 years old and — just like most humans that age — only about half developed.

Bill Burton, Hillwood’s senior vice president who’s been there from the beginning, describes how his team has gradually added airport and intermodal infrastructure, and is working now on a particular need in the marketplace for heavy-load rail. But even as transportation and labor concerns are foremost in prospects’ minds, “we still have to be competitive on the real estate,” he says.

“Fortunately, we’re not land-constrained. We’ve had the benefit of owning our land without any debt. So we use our real estate and our flexibility in real estate to our advantage … with thousands of acres, you can do some things maybe a lot of people can’t do.” 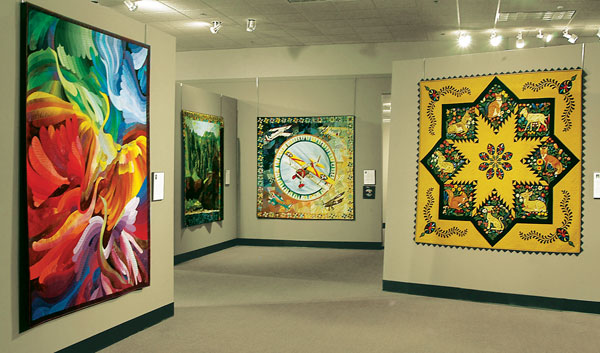 RiverportWest Intermodal Park in Paducah offers direct access to the Ohio River and service from three rail carriers. Among its other attributes, Paducah, with a population of 25,000, is home to the National Quilt Museum.
Photo courtesy of Kentucky Dept. of Tourism

Aiming for that level of prosperity without quite so many acres is Gulf Inland Logistics Park in Dayton, Texas. Gulf Inland’s direct connection to the BNSF Railway and Union Pacific Railroad provide tenants access to over 15 trains a day and one of the largest railcar storage facilities for plastic pellets in the world. On average over 1,000 railcars per day pass through the park.

“Starting sometime in 2015 the Grand Parkway (State Route 99) toll road through Dayton (Third Loop around Houston, Texas) will start construction at the western edge of this industrial park and intersecting US-90 at Gulf Inland’s northwest boundary,” writes Courtland Holman, executive director of Dayton Community Development Corp. “Construction is supposed to end by 2019/2020.” 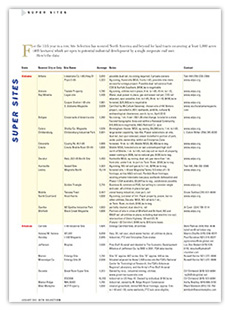 Farther east sits the 12,000-acre TexAmericas Center, which boasts 3 million sq. ft. of office, manufacturing, warehouse and storage space. It’s part of a larger parcel of 40,000 acres that used to be home to the Lone Star Army Ammunition Plant (closed by the 2005 round of BRAC) and the Red River Army Depot (reduced and then realigned by the 1995 and 2005 rounds of BRAC).

Located along the I-30 corridor just west of Texarkana, TexAmericas Center is within 300 miles of the Gulf of Mexico and sits near the crossroads of several rail systems, including the Kansas City Southern, Union Pacific and Texas Northern and Northeast Railroads.

Like its fellow BRAC-related properties in Kansas, it’s also open to guns and bows, with 8,900 acres available for hunters with permits to pursue deer, wild turkey, squirrel and feral hogs.

Yes, it’s a great site for hunting. But like its brethren across the country, it’s also a site on the hunt.