Put analytics and the assembly line together, and watch the sparks fly. 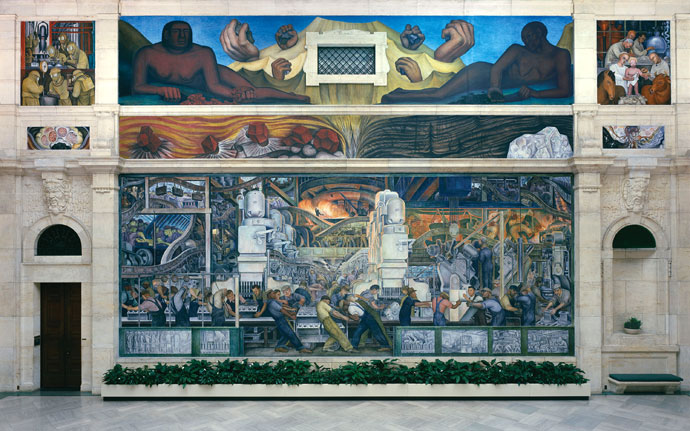 The Internet of Things (IoT) is old news. What do you know about the IoMT?

That would be the Internet of Making Things.

Early this year, Plex, a Troy, Mich.–based company that works with manufacturers to deploy cloud solutions, surveyed more than 130 of its more than 400 customers. What they learned could have implications for space utilization, logistics, innovation and location decision-making by global companies.

How does cloud technology shape location and investment decision-making down the road? We put the question to Detroit native Jason Prater, the vice president of development at Plex, whose 30 years of experience in manufacturing started when he ran machines at age 12 in his family’s business.

“For me, when it comes to site selection, the cloud has allowed manufacturers to build capabilities very close to their end customers,” he says. “When you’re close to the customer you can react to that customer. And you don’t get caught in currency exchange scenarios.”

Today manufacturers with $30 million to $50 million in revenue might have a headquarters in Indiana, an office in Krakow and a plant in Thailand to supply Southeast Asia, he says. The cloud helps them share ideas and technologies, with quick ramp-ups followed by quick insights.

“From greenfield or brownfield, ramp-up is very short now,” Prater says, especially with the growing pace of merger and acquisition activity. “If you want to grow a business in India and are going to acquire a facility there, you use the cloud and immediately connect up and run it just like your other 35 facilities around the globe.”

The Plex approach is not about installing little black boxes. It’s about being seamless and invisible, built into the manufacturing process. “We’re very much focused on tight machine integration,” Prater says, and he’s quick with examples:

Delphi spinoff Teva lowered costs after implementing Plex across 20 facilities and gauging performance, to the tune of spending 2 percent of revenue on IT to less than 0.75 percent. “That just flowed straight to the bottom line, and didn’t include all the operational and manufacturing intelligence insights,” says Prater. Some of that savings went into acquiring a division of Meritor, with the end result a quick and economical doubling of size and facility count.

As the cost of smart sensors drops, more and more manufacturers are using them for in-process quality checks that require no operator action. The corollary is vast amounts of previously uncollected data, waiting to teach you a lesson.

“The cloud has made a lot of customers store enormous amounts of data they never would have before,” says Prater. “There are patterns in that chaos. There is information about tool breakage, or quality. It’s starting to cause a need for a data scientist position at some of our customers’ sites.”

As for space utilization, Prater thinks wearable sensor technologies are going to make a lot of workspace — and workforce — decisions for you.

“They will change the workplace for operators, and the footprint the equipment is going to take,” he says. “With no human in there to measure or test for quality, they will shift how you use labor in operations.”

The three words above adorn the wall at the new, federally funded Digital Manufacturing and Design Innovation Institute (DMDII), which opened its doors for the first time in May on Chicago’s Goose Island. It’s one of several advanced manufacturing institutes rising across the United States

In Buffalo, they have a BMW — the local shorthand for the just-opened Buffalo Manufacturing Works, which received a $45-million injection from the state in 2014. It’s operated by Ohio-based EWI, an engineering and technology organization dedicated to advanced materials joining and allied manufacturing technologies.

“The cloud has made a lot of customers store enormous amounts of data they never would have before. There are patterns in that chaos.”
— Jason Prater, vice president of development, Plex

The EWI team spent most of the past two years interviewing hundreds of manufacturers in Western New York about the types of innovation and types of workforce they need. Those small-group conversations have resulted in a focus on four areas, says Michael Ulbrich, president of EWI’s New York Operations: flexible manufacturing, additive manufacturing, materials and testing, and machining and finishing. A major partner in the endeavor is the University at Buffalo (UB), home to UB’s New York State Center of Excellence in Materials Informatics and the Center for Advanced Biomedical and Bioengineering Technology (UB CAT).

“You’re looking at it at the atomistic level,” he says. “You’re simulating atom to atom how to create a new molecule with the materials you want.”

The BMW’s founder’s council is a who’s who of the Western New York corporate world.

“They all either have plans to grow, or are doing it,” says Ulbrich. “Very often the result of the project work we do with them is creating new IP.” One firm is reshoring in Akron, Ohio. Another is hiring on the east side of Buffalo. Still another just opened a second location nearby, and one other firm was just bought by a national aggregator of their services, with 14 other plants.

“Historically, when a company was bought here in Buffalo, that was a consolidation play,” Ulbrich says. “This is the opposite. They’re showing the other 13 that Buffalo is the model.”

“As a born and bred Buffalonian, who attended college in Chicago and then agonized over where I would work after college, effectively knowing that the opportunities I faced in the early 1980s Buffalo were not conducive to keeping me here — I ended up in NYC for eight years — I cannot honestly recall during my lifetime a more dynamic period in the city’s economic history,” says Zemsky’s Director of Communications and Special Projects Peter Cutler.

Ulbrich chose to move his family back from London, choosing Western New York over Oslo, Norway. “When people asked me why I was moving back to Buffalo, I said I was a value investor,” he says. “I wanted to get in before we get to the next stage.”

Brookings Institution this spring unveiled its America’s Advanced Industries report, which defines and maps America’s 50 most critical “advanced industries” (based on their heavy R&D and STEM-worker inputs) and shows their distribution across the nation’s 100 largest metros and 50 states. Among regions, the South now leads in the number of advanced industries jobs. According to Brookings, advanced industries: