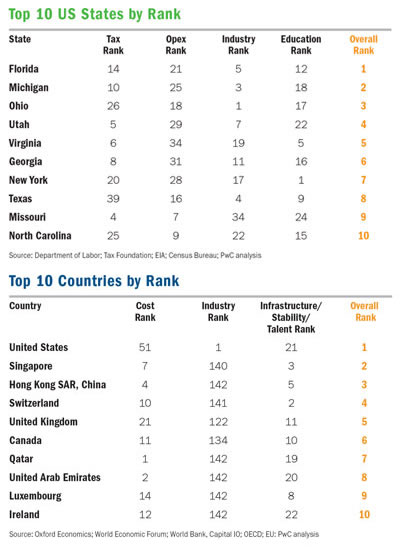 Florida is the most attractive US state for aerospace manufacturing, and the US is the most attractive nation globally, according to PwC’s Aerospace Manufacturing Attractiveness Rankings, released in April and covered in the May 2015 Site Selection Aerospace Report. The rankings, first introduced in 2013, are “a quantitative framework for assessing many pressing issues facing industry leaders as they consider how and where to optimize their supply chain, control costs and plan for future growth,” according to the report.

These issues include talent; innovation; globalization pressures & opportunities; availability of capital; cost of labor, management and energy; tax policy, regulations, IP protection and others. PwC’s analysis identifies the implications for US competitiveness for each of these issues and what companies are doing to address them.

The rankings are based on a weighted average of taxes; operating costs, including industry and overall wage rates, business climate and energy costs; industry size (existing suppliers and supply/growth of workforce including available aerospace technicians, engineers and mechanics); and educational attainment.

“In the spirit of continuous improvement, we did make some modifications to the way we do the index this time,” says Scott Thompson, PwC Partner, US Aerospace & Defense Assurance Leader. “One was adding proportionality to the industry rank. For example, the US has about seven times the number of aerospace suppliers as the second ranked country — the UK — and it’s even more than seven to one when you consider volume versus just number of suppliers. In the original study, the difference between the US and the UK was one versus two. There was no proportionality to it. We thought it was appropriate to add that.” The methodology this year incorporates the effective tax rate rather than the statutory tax rate, because it better reflects the true tax costs, including credits and tax incentives, says Thompson.

“Some states do pretty well across the board, and others do pretty well in education and industry rank but have high tax and operating costs that bump them down on a relative basis,” notes Thompson. “Take California, which has the most aerospace suppliers and the highest aerospace employment. But the growth rate brought them down such that they came in sixth overall in industry rank, where they were first overall in industry rank in the last analysis. It’s the growth rate. I could interpret that growth rate as being a reflection of their higher-cost environment — they came in 46th overall in operating cost and 34th in taxes. That says to me that some of those higher costs are hurting their growth rate a bit.”

PwC commentary in the report stresses the importance of “nurturing today’s workforce to satisfy backlog demand for aircraft” and that “growing and diversifying this workforce is fundamental to securing the competitiveness of US commercial aviation manufacturing in a globalized market.”

Thompson explains: “We see that somewhat in the education rank component. But one of the things we heard [in the initial research for the 2013 report] was that when it comes to talent, people are a lot less concerned about the cost of talent than they are about availability. They have a number of open jobs that they find it hard to recruit for — not just mechanical engineers, which is where a lot of the focus used to be. Now it’s all sorts of engineers as planes become more electronic and software-driven. And there’s a shortage of [talent] in terms of skilled manufacturing. We did our best to capture that in the educational statistics and ranking. There’s a lot of competition for talent out there. There used to be an abundance of talent competing for available jobs. Now, it’s the other way around: Companies are competing for available talent.” 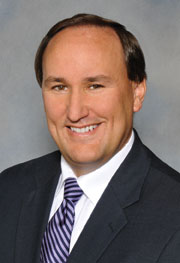 And not just within the aerospace sector, Thompson points out. Aerospace companies are competing with companies in other high-tech sectors for the talent they require. “It would make sense for the industry to engage in a concerted effort to bring back its appeal.”

The full report is available at www.pwc.com.