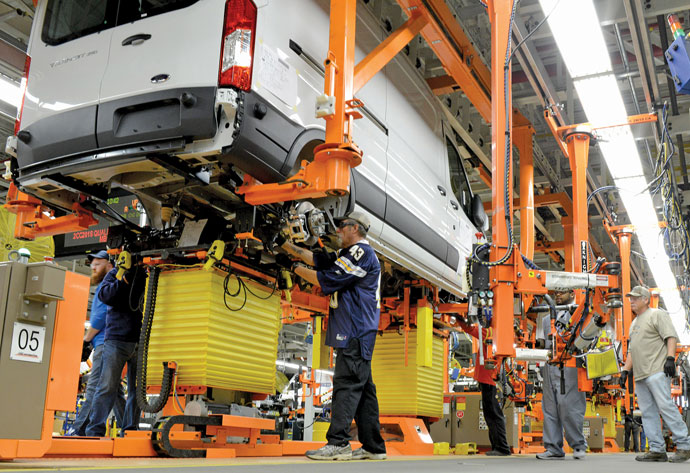 Remember 2010? According to the Bureau of Labor Statistics, fewer than 5,000 people in Missouri worked in the automotive manufacturing industry in 2010, down from over 15,000 in 2005. So what did the legislature do? It aggressively addressed the issue by passing a piece of legislation, the Missouri Manufacturing Jobs Act, during a special session. The act was specifically designed for auto manufacturers and suppliers who would be allowed to retain withholding taxes, provided they built new facilities or made capital investment in existing facilities to retain jobs. Five years later, the bold move has paid off.

According to the Brookings Institution, the Kansas City region alone employs more than 18,000 individuals in the auto industry, making the region the No. 2 auto industry trading hub in North America. As of May 2015, the region has attracted 11 new automotive suppliers in a 24-month period, creating close to 1,800 jobs with $74 million in payroll, serving the expanding General Motors (GM) and Ford plants, including:

“This market was always a distribution hub by its geographic nature,” says Chris Gutierrez, president of KC SmartPort. “It’s a crossroads of railroads and the highways. We’re the largest rail center by tonnage. All of that positive infrastructure and services that support it have allowed Ford and GM to grow and make it productive, competitive, efficient — you choose the word.”

The Ford plant in Kansas City is cited as the company’s most productive, worldwide, and produces the iconic F-150 pickup truck and the new Ford Transit Van, of special interest to LMV Automotive Systems.

“From our perspective, this market is very attractive for investment and it has two of our largest customers, Ford and GM,” says Andy Hrasky, general manager at Cosma. The company looked at sites on both sides of the state line, finding comparable incentives. The decision came down to location. “We’re in the city of Liberty, Missouri,” he says. “This location is eight miles from the Ford Kansas City Assembly plant. We make very large modules on that Transit van and the product is very bulky — you end up shipping a lot of air. They’re able to enjoy a significant freight savings. That was one of the biggest drivers.”

According to the Brookings Institution, the Kansas City region alone employs more than 18,000 individuals in the auto industry, making the region the No. 2 auto industry trading hub in North America.

US Farathane was one of the most recent suppliers to announce it was moving to Missouri. The plastics manufacturer is investing $51.6 million to retrofit a 220,000-sq.-ft. (20,439-sq.-m.) facility in Riverside, Mo., with new equipment and machinery to produce injected molded plastic parts for the Chevrolet Malibu, assembled at the GM plant in nearby Fairfax, Kansas. The facility, which should be operational by fall 2015, will also manufacture parts for the Ford F-150 and Transit van.

“Riverside is right in the heart of the action,” said Andy Greenlee, president of US Farathane. “It’s close to the OEMs, and it has an experienced workforce and a business-friendly environment.”