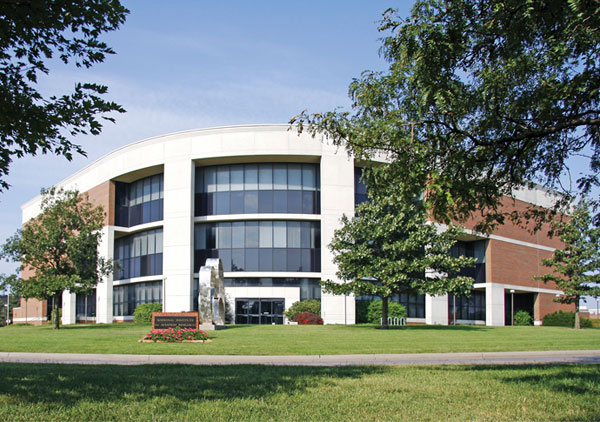 Wichita State University reported in February 2015 that it ranks first among the nation’s universities in industry-funded aerospace engineering research and development expenditures for the fifth consecutive year, according to data from the National Science Foundation. A Higher Education Research and Development survey is compiled by the NSF’s National Center for Science and Engineering Statistics and lists information from all reporting universities from fiscal year 2013, when Wichita State reported $25 million in industry-funded aerospace R&D (see chart). 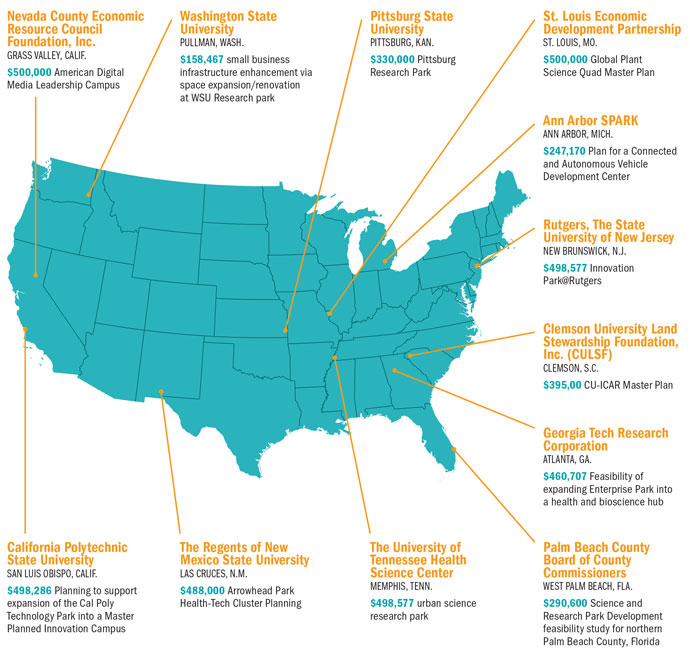 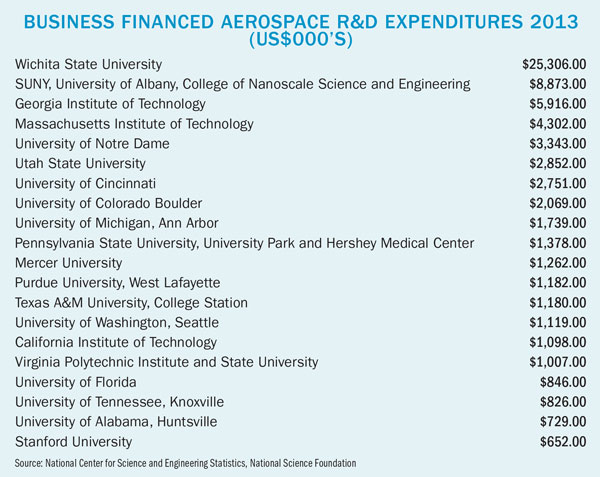 During this time, Wichita State also received $5 million from federal agencies like the Department of Defense, Federal Aviation Administration and NASA, and additional funding from the State of Kanas. Overall aerospace R&D funding for 2013 totaled $39 million, putting Wichita State in the No. 4 spot nationally.

“Our commitment to increasing industry partnerships shows in these latest numbers,” said Wichita State President John Bardo. “We’re doing everything we can to realize continued growth in the next few years.” For fiscal year 2014, Wichita State reported $39.7 million in aerospace R&D and $58.8 million in total R&D expenditures.

Wichita State’s strength in aerospace R&D is due to the efforts of the National Institute for Aviation Research. NIAR is the nation’s largest university-based aerospace R&D institute, specializing in computational design and analysis; and certification and testing for materials, full-scale components, coatings, impact, environmental and electromagnetic effects, human factors and aerodynamics.

Ground is breaking this summer on a new facility for Airbus and an Experiential Engineering Marker space building at Wichita State University’s new Innovation Campus now under development on 150 acres (61 ha.) formerly occupied by the university’s golf course. “The Innovation Campus is a new way for WSU to interact with industry and the community,” says Tracee Friess, director of communication, research and technology transfer, at Wichita State. “It is geared toward research, innovation, applied learning and industry interaction based on the model established by the university’s National Institute for Aviation Research.”

A more in-depth profile of the Innovation Campus will be the subject of the Kansas Spotlight in the November 2015 issue of Site Selection.

Announces $5 Million in Grants To Advance Innovation Across America

US Assistant Secretary of Commerce for Economic Development Jay Williams visited Rutgers University in New Brunswick, N.J., on May 22nd to announce the 12 recipients of the 2014 Science and Research Park Development Grants, part of the Regional Innovation Strategies program. The Regional Innovation Strategies (RIS) program, which is being run by the Department’s Economic Development Administration’s (EDA) Office of Innovation and Entrepreneurship, is a new initiative designed to advance innovation and capacity-building activities in regions across the country through three different types of grants: i6 Challenge grants, Cluster Grants for Seed Capital Funds, and Science and Research Park Development Grants. US Secretary of Commerce Penny Pritzker announced the recipients of the i6 Challenge grants and Cluster Grants for Seed Capital funds in March.

“Supporting innovators and entrepreneurs at every stage is crucial to ensuring America remains competitive in the global economy,” said Assistant Secretary Williams. “The Regional Innovation Strategies Program lays the groundwork from which centers of research and innovation can take root and thrive in cities across the country. I look forward to seeing what innovative opportunities come from Regional Innovation Strategies’ funding.” The Science and Research Park Development Grants program provides funding for feasibility and planning for the construction of new or expanded science or research parks, or the renovation of existing facilities. The 2014 grantees are indicated in the map below.

In June, the Association of Public and Land-grant Universities (APLU) designated 18 public institutions in the 2015 class of Innovation & Economic Prosperity Universities. The designation acknowledges universities working with public and private sector partners in their states and regions to support economic development through a variety of activities, including innovation and entrepreneurship, technology transfer, talent and workforce development, and community development. Each university received the designation after conducting a thorough self-review with outside stakeholder input and subsequently submitting an application that went through a rigorous independent review process.

“Public universities serve as economic engines for their local communities and states by conducting cutting-edge research to reach new breakthroughs and developing the talent to help existing businesses grow stronger and enabling new ones to develop and thrive,” says APLU President Peter McPherson. “The 18 institutions in the 2015 class of Innovation & Economic Prosperity Universities serve as wonderful models of how public research universities extend beyond their campuses to engage their communities in economic development that creates jobs and improve lives.”