Tennessee gets creative in aligning workforce development and higher education. 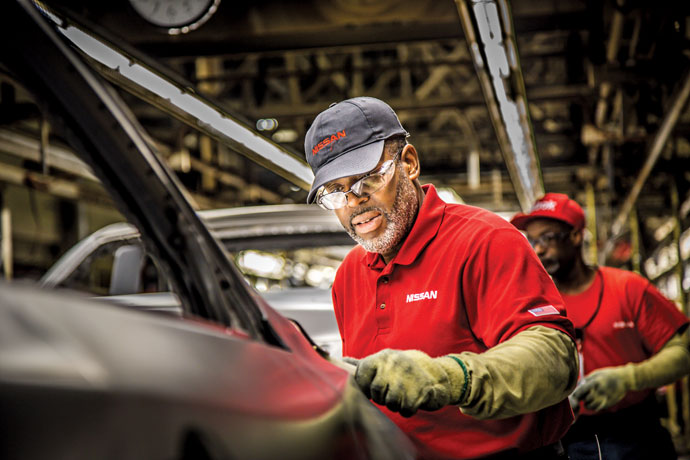 The ink is barely dry on one expansion announcement before the staff of Tennessee’s Department of Economic and Community Development (TDECD) is writing another. Job creation numbers are well into the thousands in the first six months of 2015 alone. “The exciting thing is that we keep track and our pipeline has over 40,000 jobs in it right now,” says Randy Boyd, commissioner of TDECD. “That’s over 30 percent bigger than it’s ever been before. There’s a lot of positive momentum. I was kidding with the team the other day that there’s so many darn job announcements that we don’t have any time to get work done.”

It’s a challenge Boyd happily accepts, especially since he’s confident that the state will have more than enough qualified workers to fill those jobs. An innovative statewide program, Tennessee Promise (TN Promise), offers qualifying high school graduates the opportunity to attend two years at a community or technical college at no charge — no tuition, no fees. President Obama was so impressed by the program that he created a similar proposal for the entire nation.

Creating an Avalanche of Skilled Workers

TN Promise was proposed and endowed with $350 million from a lottery fund in 2014. It’s considered a “last dollar” scholarship. Students have to fill out the Free Application for Federal Student Aid (FAFSA) in order to claim all the state and federal money available to them. Whatever fees are yet to be paid, the state pays through TN Promise. “About 40 percent of the students that apply will have their fees paid through Pell Grants and other state aid, they will have gone for free and won’t need the extra provided through TN Promise,” says Boyd. “The funny thing is that students and their parents just assume that they can’t afford college and don’t even take the step to fill out the FAFSA. In many ways, just the marketing, the messaging that you can go to college for free, changes people’s perspective.” 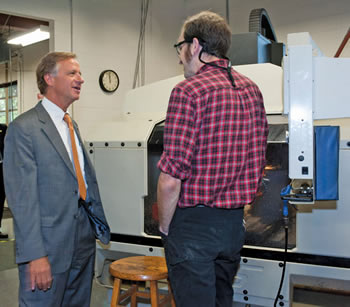 Governor Bill Haslam speaks with a student at the Tennessee College of Applied Technology at Chattanooga State Community College.
Photo courtesy of the Office of the Governor

The goal is to change the state’s culture. “We have a culture, as many states do, of expecting a big portion of our population not to go to college because no one in their family has ever gone, it’s not something they do, not something they can afford,” Boyd says. “But now, being able to say this is guaranteed in perpetuity, we can tell kindergartners and their parents, ‘Start changing how you prepare because this is your destiny. You can go.’ ” Officials expect more than 20,000 students entering community or technical college this fall will take advantage of TN Promise scholarship funds.

The TN Promise initiative was so well-received that the state decided to go after another segment of the workforce population — experienced workers just a few credits shy of certifications or degrees. “We’ve got 10,070 adults signed up for what is called Tennessee Reconnect [TN Reconnect], which means they can go to one of our technical colleges for one year to get a certificate in mechatronics, welding, any of those high-need skilled areas,” says Boyd. “We’ll have an avalanche of skilled workers coming our way in about one to two years, which syncs up with most of the major job announcements.”

Some of those jobs will no doubt be found at Nissan North America’s new supplier park near the company’s vehicle assembly plant in Smyrna. In March, company officials announced plans to invest $160 million to build the supplier park which will support 1,000 new jobs. Project plans include construction of a 1.5-million-sq.-ft. (139,355-sq.-m.) integrated logistics center which will serve as an immediate space for suppliers and for multiple support operations. It’s expected to be complete in late 2017.

Automotive supplier Ficosa announced plans to build a $58-million new production facility in Cookeville, creating 400 new jobs. “The new facility is a strategic move that will allow consolidation of key operations and enable further future growth in one of the largest automobile markets in the world,” said Javier Pujol, Ficosa’s global CEO. “The NAFTA region represents over 35 percent of the group’s global sales, making it our second largest market.”

Two new production processes will go into the 270,000 sq. ft. (25,084 sq. m.) facility: aluminum injection and production of signal lights that are integrated into rearview windows, components currently sourced in Mexico and China.

Not all the anticipated jobs are in the automotive industry. Community Health Systems, Inc. (CHS) is building a $66-million shared services center in Antioch, near Nashville, that will consolidate services into one location and create 1,500 jobs over the next five years. “We’ve known for 30 years that Middle Tennessee is a great place to do business,” said Wayne T. Smith, chairman and CEO of CHS. “We looked at many states and sites for this expansion and ultimately determined that Middle Tennessee offers the business environment, skilled workforce and quality of life to support our growth.”

Toronto-based CVMR, which specializes in project management of large mining operations, mineral processing plant design and construction, and other metallurgical operations, is moving its global headquarters and operations from Ontario to Oak Ridge. CVMR president Michael Hargett cited “superior local resources,” including workforce, among the top reasons for relocating. The project is expected to create more than 620 jobs.

With the kind of job creation figures Tennessee is tallying, the success of TN Promise and TN Reconnect is critical. It’s a classic case of supply and demand that Tennessee appears to have a handle on.

“We’ve got a huge well of trained, skilled workers,” says Boyd. “Our job is to make sure that when we graduate them, the great jobs we promised are actually there.”

The first iteration of the Tennessee Promise scholarship program started in the east Tennessee city of Kingsport as a workforce development initiative, more than 10 years ago. Called “Educate and Grow,” the Kingsport program offered qualified students free tuition for four semesters of classes at the city’s Northeast State Community College. The program, which was duplicated in more than 20 other Tennessee communities, garnered national attention, winning the 2009 Innovations in American Government Award from the Ash Center for Democratic Governance and Innovation at the John F. Kennedy School of Government at Harvard University.

“Instead of traditional tax incentives, Kingsport has revitalized its economy by making its workforce more competitive,” said Stephen Goldsmith, director of the Innovations in American Government Program at Harvard Kennedy School in 2009. “They recognized that today’s high school diploma does not adequately prepare students for the challenges of the global economy. Cities across the country can learn from Kingsport’s work in revamping curricula, building new infrastructure, and developing creative partnerships.”