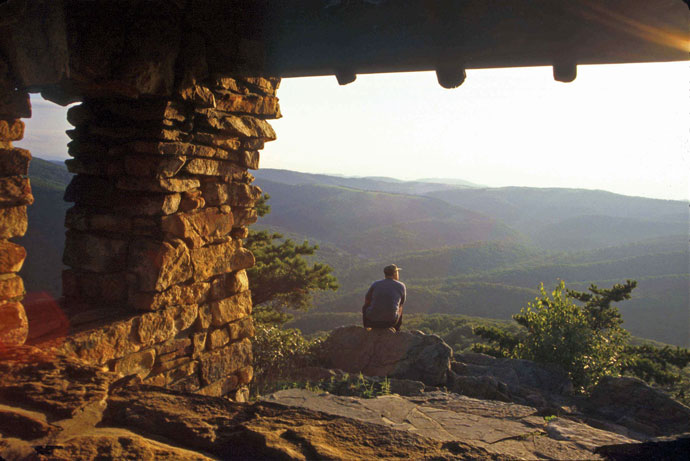 Lost River State Park is near the four-state nexus where P&G will locate its half-billion-dollar plant.
Photo courtesy of West Virginia Dept. of Commerce
by ADAM BRUNS
I

n February, for only the second time in 44 years, Procter & Gamble Co. selected a new site in the United States.

By 2017, the location near Tabler Station in Berkeley County, W. Va., will be home to what P&G, in a release, says will be one of the most advanced and sustainable plants among P&G's global manufacturing and supply-chain operations, employing 700 people. Gov. Earl Ray Tomblin called the project a huge win for the state of West Virginia. And its numbers could be even huger.

Currently, P&G's U. S. operations include 29 plants in 21 states. The only other time since 1971 that P&G built new in the US was when it picked Box Elder County, Utah, in October 2007 for a 300-employee paper tissue and towel plant to serve the western US marketplace. That plant opened in 2011.

The more than 1-million-sq.-ft. facility in the West Virginia's Eastern Panhandle represents a $500-million capital investment and will produce multiple, yet-to-be-named P&G brands when it is fully operational. Not knowing what it will make is a lingering mystery, but not an overriding concern, given that the company had $83 billion in sales last year and 21 of its brands are worth more than $1 billion.

The company's half-dozen new logistics sites also include two buildings totaling 1 million sq. ft. in Edwardsville, Ill. (in the state's southern tier); a new facility in Wilmer, Texas (DFW) and another in Southern California's Moreno Valley. P&G also maintains about 20 other distribution centers in the US and Canada.

"This investment is about the future of P&G's entire supply chain from sourcing raw materials to production and distribution," said Skoufalos of the new Berkeley County site. "This will enable us to rapidly and efficiently serve retail customers and consumers throughout the eastern half of the United States, reaching 80 percent of them within one-day transit."

The plant is being constructed on a 500-acre site at the Tabler Station Business and Industrial Park, located at Exit 8 along I-81. Short-rail service connects the site to CSX and Norfolk Southern mainlines, and Eastern West Virginia Regional Airport sits adjacent to the park. Hagerstown, Md., is just to the northeast, where I-81 meets I-70. And Washington Dulles International Airport is a mere 45 minutes away. Berkeley County is the second most populous county in the state after Kanawha County, and has seen its population grow by 37 percent since 2000, to 104,160.

The original park was formed when the Berkeley County Development Authority (BCDA) purchased 240 acres over a decade ago. It purchased an additional 350 acres in 2012, and the next year initiated a strategy to attract a large end user. By the close of 2013, Project Independence was simmering, with JLL serving as P&G's primary site consultant.

Stephen L. Christian, the BCDA's executive director, says his team hosted site visits from the JLL team as well as individuals from the yet-to-be-named P&G during the first quarter of 2014. By the second quarter, P&G had whittled down its candidate sites from around 40 to four, says Christian, and negotiations commenced to put together a purchase contract for the land. P&G also met with the HR directors at half a dozen major employers in the region.

Then, as the company engaged with the state and Gov. Tomblin's office and pursued its environmental and geotechnical due diligence, the scope of its plans suddenly expanded, requiring 450 acres instead of the original 350. At least one other site among the handful of candidates in the Mid-Atlantic region was knocked out of the race by the new space requirement.

"P&G's vision for what this new manufacturing plant was going to be evolved," says Christian. "Luckily we had plenty of expansion room."

It appears the vision for the plant is even larger than what was announced in February.

Christian says expanding the industrial park enough to get on the radar was crucial. "I really wanted us to be able to offer a megasite for one of these mega-manufacturing projects," he says.

For P&G, demographics for eventual distribution are complemented by the reach of a four-state labor pool Christian says stretches from Chambersburg, Pa., to Front Royal, Va.: "The labor pool doesn't really care about rivers and borders," he says. The area has welcomed a large e-fulfillment center from Macy's as well as recent projects from McKesson and Rustoleum.

"We've slowly become a bit of a bedroom community of the Northern Virginia/DC metro area," Christian says, "while still retaining our slightly rural feel, and having the benefit of having the I-81 corridor run right through the center of our county."