Credit Where It’s Due

The United States still has a ways to go to attain one organization’s goals for post-secondary credentials. 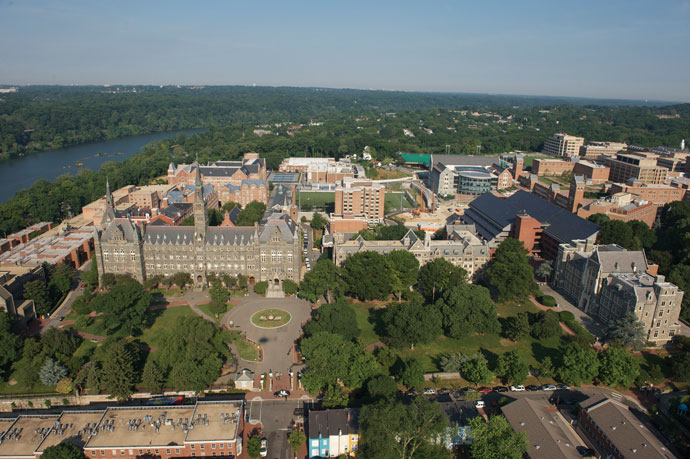 et the countdown begin. And let more people stand and be counted.

In April, the Lumina Foundation — whose goal is to see 60 percent of US adults possess a high-quality post-secondary degree, certificate or other credential by 2025 — released its latest progress report, “A Stronger Nation through Higher Education.” It showed that only 40 percent of working-age Americans (ages 25-64) held a two- or four-year college degree in 2013 — the most recent year for which data are available. That figure is up from 37.9 percent in 2008.

“Economists and other experts give us good reason to be convinced that reaching Goal 2025 is a national imperative,” said Jamie P. Merisotis, president and CEO of Lumina Foundation. “We have just 10 years to reach it, and our current pace of progress is insufficient for meeting employers’ workforce needs and addressing the growing inequality issues we face as a nation. For America to truly prosper — for the nation to attain, not just individual opportunity and economic security, but social justice and cohesion — an increased sense of urgency is needed to expand college success dramatically, and in all directions.” 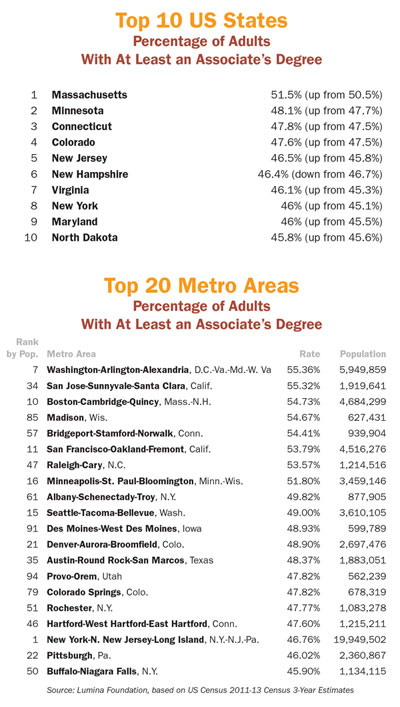 If current trends continue, 30.7 million more Americans will earn college credentials by 2025. But that increase will allow the nation to reach an attainment rate of only 48.7 percent over the next 10 years.

The report showed big gaps by race, from Asian adults leading at 60.1 percent to Hispanic adults at 20.3 percent. But all ethnic groups show improvement.

The report notes three areas where action is most needed to move the attainment needle in America:

“Far too many students drop out of college without completing a degree, and states and institutions need to follow the lead of states like Tennessee by implementing a comprehensive approach to increasing completion,” said the report. “Making college affordable for all Americans who need it should be an urgent national priority, and will require that we rethink many of our assumptions about how much college costs and how we pay for it. We also must work on creating better pathways to guide students successfully through postsecondary education systems.”

Target the ‘Some College, No Degree’ Population

“As a result of attrition rates, an astounding 36.2 million Americans — nearly 22 percent of the working-age population between the ages of 25 and 64 — have attended college but did not obtain a degree. All states should follow the lead of states like Georgia, Oklahoma, and Kentucky to re-engage this critical group. If just 15 percent of these ‘some college, no degree’ adults complete, that would result in nearly 5.5 million more Americans with degrees.”

Recognize All Forms of Learning, Including Certificates and Credentials

“For now, attainment numbers focus on Americans with degrees. But as workforce demands shift, many employers see tremendous value in hiring candidates who hold the high-quality certificates, certifications and other credentials that lead to employment and further education. It’s estimated that 7.8 million Americans fall into this category. Lumina Foundation is working to find ways to recognize the learning that these high-quality postsecondary credentials represent and create stronger pathways from them to degrees. Current data don’t allow that, but the Foundation is optimistic that improvements in data systems will soon make this possible.”

“We need to reflect the importance employers place on these credentials by valuing them more as a society,” said Merisotis. “The good news is that the U.S. Census may begin reporting data on certificates as early as next year. And we are working with numerous organizations to develop a strong national system of postsecondary credentials that allows all high-quality learning beyond high school to count.”

In June, Lumina Foundation joined with more than 40 business, labor and education groups to launch a national dialogue focused both on understanding the problems created by the current credentialing system and developing solutions to create a more connected, transparent system that better defines credentials in terms of what individuals know and can do. A new website — connectingcredentials.org — has been launched to support the dialogue.

“We need to transform today’s fragmented post-secondary landscape into one that is student-centered and learning-based so that the meaning of credentials is clearer to employers and students,” said Merisotis. “This is critical if we’re to increase access, multiply the benefits of increased attainment, reduce social inequity, ensure educational quality and foster individual success.”

According to the Center on Education and the Workforce at Georgetown University, 7.8 million Americans hold a high-quality postsecondary certificate as their highest-level credential.

“We believe these should be counted toward Goal 2025,” says the Lumina Foundation.