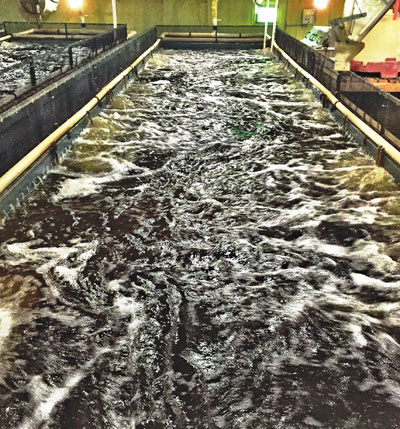 Raising fish in onshore farms is a sustainable solution. Putting those farms in former industrial facilities is too.

hen Electrolux shut down the last part of its washer-dryer factory in Webster City, Iowa, in 2011, the last 500 jobs of what was at one time a 2,300-person payroll were gone. The move of production to Mexico was not unexpected, but that didn’t soften the blow. Then, in November 2012, the company said it was moving its laundry products R&D center from Webster City to Charlotte, N.C., where it was expanding its headquarters.

Just like that, 80 more jobs disappeared from Webster City. The plant was demolished, as industrial America’s winds of change kept blowing. But today a new Iowa crop is spreading across Electrolux’s former distribution center and other nearby buildings, and its business model is very familiar to Iowans.

VeroBlue Farms (VBF), with offices in Calgary, Alberta, and Plano, Texas, aims to establish the largest onshore urban fish farm in North America at the site, operating as Iowa’s First. The company plans to produce an initial 7.2 million pounds a year of barramundi, a highly nutritious and sufficiently tasty fish species that’s not only easy to raise in tanks, but viewed as a wise choice by those wanting to do the right thing for both the world’s oceans and its appetites.

Part of VBF’s plan is to expand production capacity like many an ag company has done in the past: by inking deals with independent growers who will sell their fish to VBF for processing. The traditional land-based agriculture model includes protein credentials: The Iowa’s First operation initially used a system belonging to cousins Mark and Jeff Nelson, Iowa natives with 50 years of corn, soy and hog farming experience. Mark caught the fish-farming bug while selling artificial insemination rods at the annual Iowa Pork Congress. So there’s that.

The company in November held an open house in Webster City, located near I-35 in northwest Iowa. By January VBF’s growth plans had grown themselves, as the company agreed to buy 2,000 aquaculture tank systems from Opposing Flows Aquaculture for more than $100 million, to be delivered to the Iowa site over three years. VBF will be the exclusive distributor of the tanks, which will help it toward an eventual goal of 40 million pounds of fish annually.

Keith Driver is president of VeroBlue Farms. He’s fielding queries from all over as the company looks to grow, and grow fast. The key to that growth is a simple, compact system that, like hogs, is low to the ground and efficient at turning input into protein.

“A number of designs are heavy on pumps and rely on moving a lot of water,” he says. “The system we ended up going with in Iowa, these guys had in their hog barn. We looked around — there were a couple buildings in town, you have a labor force, and you have educated people who understand the business. So that’s how we ended up there.”

VeroBlue’s system relies on blowers, and on tanks about half the size of a shipping container that could fit in many types of buildings. And the cost to run a few blowers instead of sophisticated pumping and oxygen-separating setups? “Some of these guys are paying $100,000 a month in electric bills,” says Driver of other fish farms. “Ours is $5,000 a month.”

Look at a list of fish farming operations, and most raise tilapia. “That’s a low-end fish, so it’s a volume game,” says Driver. “It’s just not the same as the barramundi, in terms of price per pound. We’re getting a higher margin, but doing it at a lower cost like tilapia.” Moreover, VeroBlue is putting in systems to get down to a gallon and a half of water per pound of fish produced (vs. hundreds or thousands of gallons per pound with hogs or cattle).

VeroBlue is pursuing two programs: The first is a landlord model where a partner owns a building, and rents it back to VeroBlue for a base rate plus profit.

The second choice is to be a designated grower. VeroBlue provides the fingerlings, training and equipment, buys the fish back at a set price, and shares profits, “not too dissimilar to hogs or turkeys,” he says. “We give them the genetic stock, and they grow it. Lots of people in Iowa are good at growing protein. We’re hiving the risk. We can move geographically and get the labor force we need, family-farm-type labor, bringing a generation back to the farm. So the cost base tends to be lower.”

There is precedent for the Iowa venture, but it doesn’t come without warning signs.

In a February blog post on the promise and pitfalls of bringing fish farming ashore via recirculating aquaculture systems (RAS), aquaculture pioneer Josh Goldman — whose firm Australis has headquarters and a fish farm in Turners Falls, Mass., that employ 45, and a fish farm in Van Phong Bay, Vietnam, that employs 80 — listed 61 RAS sites launched over the past 20 years in 27 states. Forty-two have closed, and only 17 are still operating, including nine in North Carolina (all tilapia); two each in Indiana and Pennsylvania; and one each in Massachusetts, Maryland, Louisiana and Virginia.

But “the investment community knows the growth potential,” says Steven Hedlund, spokesperson for the St. Louis-based Global Aquaculture Alliance, “and knows that wild fish production has leveled off, and demand for seafood will increase dramatically.”

VeroBlue is counting on it. The Iowa’s First website notes that the world at this rate will need another 100 million metric tons of aquatic food annually by 2050.

With the outsourced grower model VeroBlue is pursuing, any 60,000-sq.-ft. to 80,000-sq.-ft. building within three hours’ drive of the hub could become a commercial-scale fish-farming operation, making low six figures of net revenue with 48 tanks, says Driver. The key is getting the fish onto the restaurant’s plate when the chef needs it, whether that plate’s in Asia or New York City. The Webster City hub will have 360 tanks, their fingerlings’ growth timed so two full tanks a day can be harvested — and that restaurant is always getting fresh fish at the desired size.

Where’s VeroBlue looking to place its next hub? Driver won’t say, but it’s coming soon, as the business grows as fast as those hatchlings.

“We’re working on our next hub already, because so much of our cost is transportation and feed,” he says. “You can grow the market only so big in Iowa. It becomes a matter of replicating it.”

Plenty of areas are aligning themselves as food/ag hubs that might welcome such diversity. Efforts include Project ABE (Agricultural Business Epicenter) from Greater Mankato Growth in southern Minnesota and the new Great Lakes Ag-Tech Business Incubator in Ottawa County, Mich.

Much of VeroBlue’s location scouting is driven by territories’ regulatory regimes, as each state and province does its own risk assessments involving introduction of fish species, even fish raised in such controlled conditions. Driver’s team is trying to find the right combinations of regulatory and market conditions to make a hub hum. Canada’s exchange rate is making fish 25 percent more expensive there, arguing for locating a facility north of the border.

“I’d love to see one west of Las Vegas feeding the California market,” says Driver, “with one in the Northeast and a couple across Canada.” Told of areas such as TechCity in the Hudson Valley pushing their ag and culinary credentials, he says New York would be a strong candidate, as would the Bay Area — “anywhere where there’s a strong, multicultural open-minded culinary scene, you’re going to see us bringing in the product and putting in facilities.”

He sees a window of opportunity opening now: “There are definitely lots of buildings out there, and lots of folks looking to grow,” he says.

But a few places rise above the rest when it comes to growing proteins.